The last couple of years have been all about lightweight, compact MSRs. But now that manufacturers have largely met that...

The last couple of years have been all about lightweight, compact MSRs. But now that manufacturers have largely met that demand, a new AR carbine just isn’t good enough. This year, shooters want more options. They’re looking for manufactures to offer the same broad selection that’s been available in conventional bolt-action rifles for years. And the latest wares at the 2018 SHOT show prove that gun makers are responding, with specialized hunting MSRs, precision tactical rimfires, semi-auto pistol-caliber carbines, and more. In short, lots more choices for operators, hunters, and recreational shooters who like their guns black.

The .243 Winchester gained fame because of its crossover capabilities; it’s an ideal cartridge for varmints, predators, and big game. For 2018, DPMS is chambering the .243 in the lightest version of their exceptional AR-15 hybrid GII Compact Hunter. At less than 7 pounds, this new carbine should hit the sweet spot for pretty much any North American hunter who wants to carry an MSR. It has a 16-inch threaded barrel, free-floating carbon-fiber handguard, excellent two-stage trigger, and a B5 SOPMOD stock. $1,599; DPMS

The new Ruger PC (for Pistol Caliber) is a compact, lightweight, takedown, semi-automatic rifle, chambered in 9mm Luger, with a fluted barrel that you can get threaded or unthreaded. One of the gun’s coolest features is its interchangeable magazine well, which takes either Ruger SR-series or Glock magazines. The PC comes with open sights and a Picatinny rail on top of the receiver for mounting a riflescope or red dot. A short section of rail is also attached to the underside of the fore-end for a light or light-and-laser combo. A reversible magazine release and charging handle makes this easy-shooting, ultra-handy rifle even more versatile. $649; Ruger

For years the 450 Bushmaster cartridge was considered almost extinct, but it’s seeing a resurgence lately. And to take advantage, Bushmaster is offering a new carbine chambered for their big-bore cartridge, which is ideally sized and suited to the AR-15 platform. It has a 16-inch barrel, a Hogue grip, ALG Defense trigger, muzzle-brake, AAC Square-Drop handguard, and is fitted with the very comfortable Remington R-25 stock and a soft recoil pad. The full-length Picatinny top rail makes this rifle very versatile when it comes to sighting options. It should be ideal for feral hogs in almost any situation. $1,299; Bushmaster 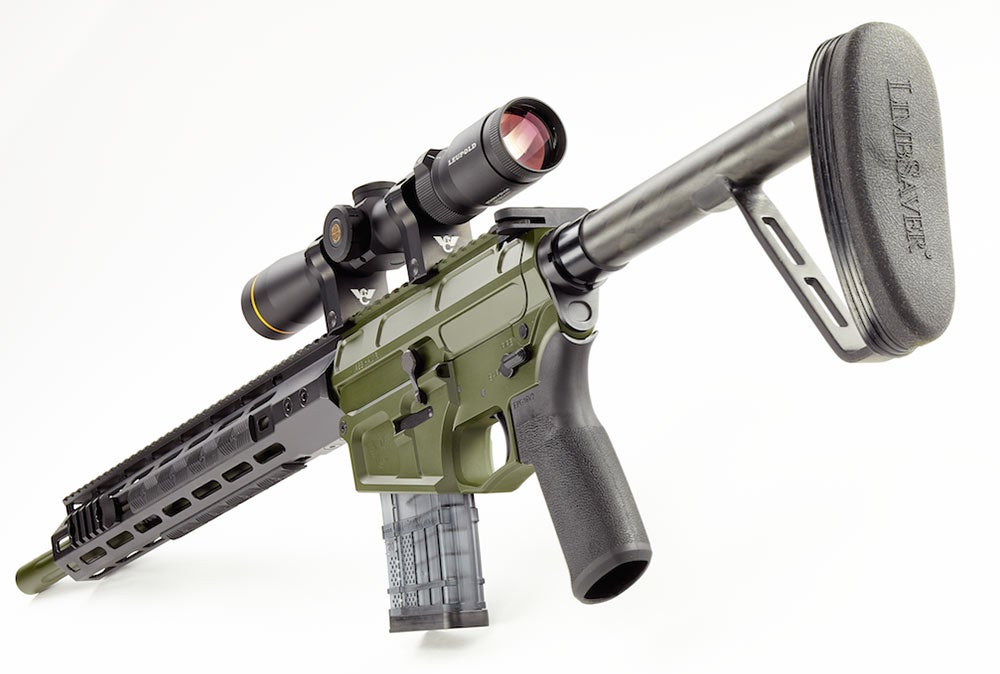 Bill Wilson, who is one of the foremost firearms innovators of the new millennium, has taken the MSR platform to a place it’s never before been. Wilson Combat’s new 7-pound, 5-ounce Ultimate Hunter rifle is chambered for a cartridge capable of taking any animal on this planet—and probably any other planet for that matter. With its 18-inch barrel and mid-length gas system, this AR-15 sized MSR will push the 300-grain bullet from the .458 HAM’R cartridge to 2,100 fps. It’s mean, nasty, elegant, and exquisitely crafted. $3,055; Wilson Combat

The new MkG45 GUARD is a new pistol-caliber carbine MSR that’s chambered for the 45 Auto and feeds from Glock magazines. The rifle operates on CMMG’s patent-pending Radial Delayed Blowback system, and is offered in five configurations, with either an 8- or 16-inch barrel. For anyone looking for an alternative to a compact MSR chambered for a rifle cartridge for home defense, the MkG45 Guard is a solid option. Starts at around $1,300; CMMG

The Tommy-gun is one of the most iconic firearms of all time, and—you could argue—the first, true American-made tactical blaster. The original Thompson was chambered for the 45 ACP, and now Auto Ordnance is offering this classic in 9mm Luger. The T5-9L20 comes with a 16-inch barrel and feeds from a 20-round, stick magazine. The frame and receiver are machined from a solid billet of aluminum, and the buttstock, grip, and vertical fore grip are all made from American Walnut. It might not be all-black, but make no mistake, this is the gun Clyde wished Bonnie had. $1364; Auto Ordnance

The term “black guns” usually describes semi-auto, MSR, or sniper-type carbines, intended for law enforcement or personal protection. It’s not the category where you expect to find a rimfire rifle. On the other hand, there’s really no other way to classify this new and unique rifle from Ruger. The Precision Rimfire is a bolt-action rifle chambered for the .22 LR, but built on a one-piece chassis stock with a highly adjustable and ergonomic stock. The rifle has a Picatinny rail for mounting an optic, feeds from detachable 10-22-style magazines, and features a free-floating handguard, surrounding an 18-inch cold-hammer-forged target barrel with a threaded muzzle. And, well, its black. $529; Ruger

Best known for excellent aftermarket replacement barrels, E. R. Shaw has introduced a smaller, lighter, and more affordable AR-10. And like everything from this company, it’s quality stuff. The ERS-10 has precision-machined uppers and lowers, cut from 7075-T6 aluminum forgings. Specs include a 20-inch barrel, 15-inch handguard, Magpul ACS-L buttstock, and the gun tips the scales at 9.5 pounds. Available in .308 Winchester with a 1-10 twist or 6.5 Creedmoor with a 1-8 twist. $996; ER Shaw Barrels