The concealed-carry revolution continues to sweep across America, and firearms manufacturers are busy making handguns that are lighter and more... 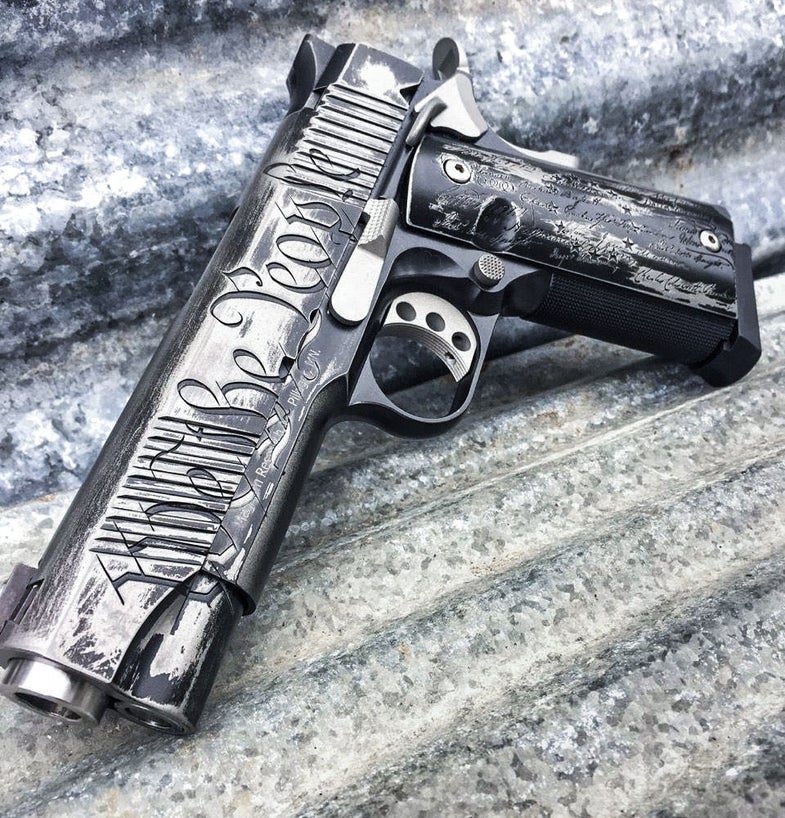 The concealed-carry revolution continues to sweep across America, and firearms manufacturers are busy making handguns that are lighter and more compact to satisfy the ever-growing number of shooters who want to take responsibility for their own safety. Consumers are also demanding—and getting—pistols that are compatible with suppressors. And, believe it or not, the revolver is not as extinct as many might think; it’s still a viable option for personal protection, as well as hunting. This is unquestionably the best time ever to go to a gun store and get a new handgun. 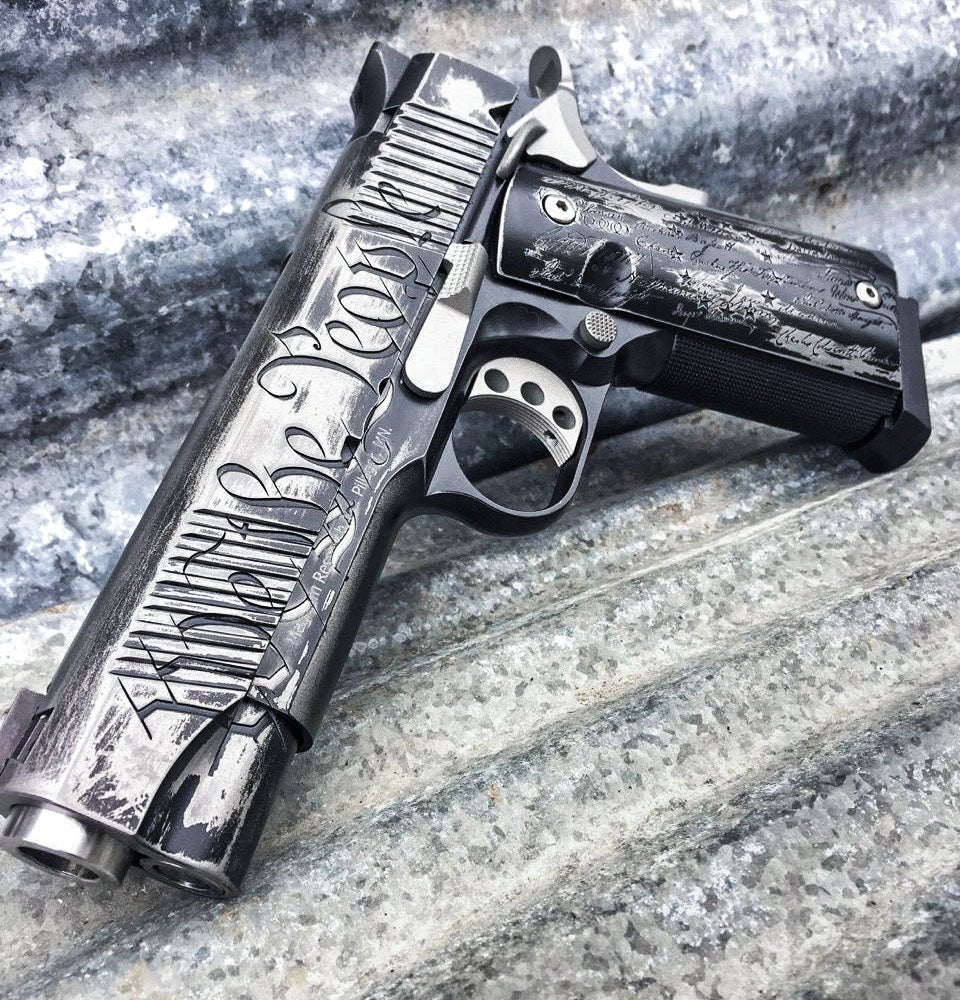 Magnum Research is well known for semi-auto handguns chambered for the .44 Magnum. For 2018, they worked with Outlaw Ordnance to offer something truly special. This new Desert Eagle 1911CSS is chambered for the .45 ACP, has a stainless frame and slide, and a 4.33-inch bull barrel. But what truly sets the pistol apart is the two-tone, distressed Cerakote finish with deep laser engraving of “We the People,” plus grips engraved with approximately 40 signatures from the Constitution. This might be the ultimate barbecue pistol! $1,225; Khar.com —R.M. 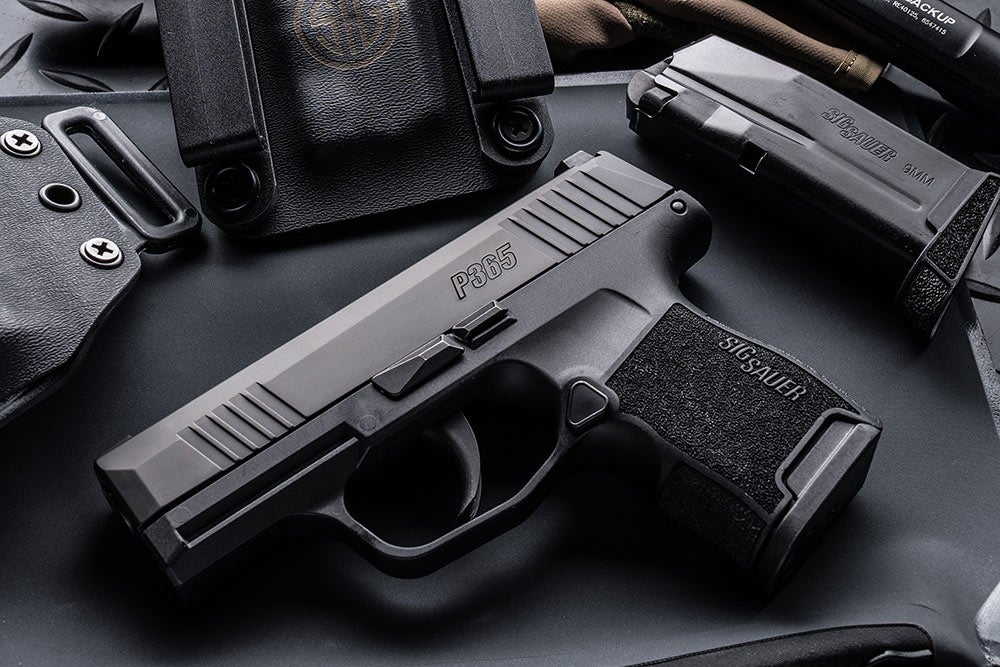 If you can’t tell right away from the name, the new P365 from SIG is intended to be a handgun you can comfortably carry 365 days per year. Chambered for the 9mm Luger and rated for +P ammunition, this 5.8-inch-long, polymer framed, striker-fired pistol has a 10+1 capacity and weighs less than 18 ounces. It comes standard with SIGLITE night sights, and has an affordable real-world price of less than $600. Concealed-carry holsters are available direct from SIG to help you make this your every day carry handgun. Sig Sauer —R.M. 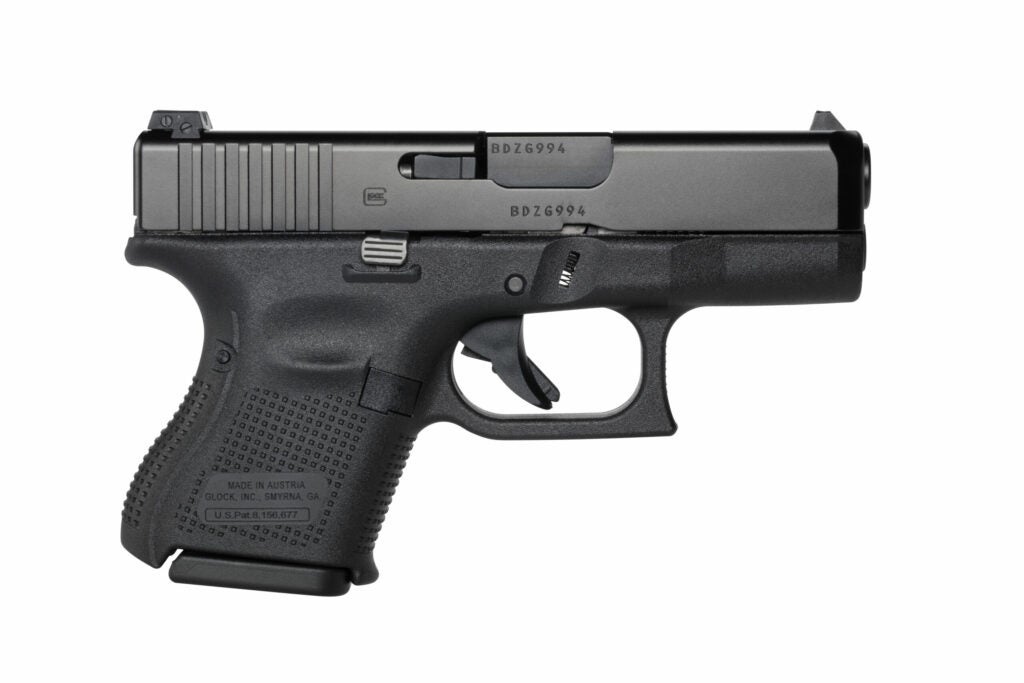 The G26 is the latest in Glock’s Generation 5 line.

The Glock 26 is one of the modern classic carry guns. It handles and shoots like a full-sized pistol (especially with a magazine pinkie extension), holds 10 rounds of 9mm, and conceals easily as a j-frame revolver. I’ve had my Gen 3 version for years now, and it goes hidden with me just about everywhere it’s legally allowed, from Wal-Mart to the backcountry. The G26 is the newest model extension to Glock’s Generation 5 line. If you’re not a regular Glock shooter, changes from one pistol generation to the next can seem subtle, but Glock is not in the habit of throwing something new in the catalog just because the calendar year changes. Updates are carefully considered. The most noticeable change to the Gen5 G26 is an ambidextrous slide-stop lever (meaning there’s a button on both sides of the slide), and removal of the finger grooves on the grip. Inside is the Glock Marksman Barrel, and the gun wears the new nDLC Finish, which Glock claims is tougher and more durable. My old G26 is showing finish wear from years of carry in sweaty southern summers, and so the upgraded finish is a nice touch to a gun that’s designed to be packed a lot. I’ve put a bunch of rounds through my G26 and haven’t seen it malfunction yet—but I might have to go for this upgrade all the same. $699; Glock —W.B. 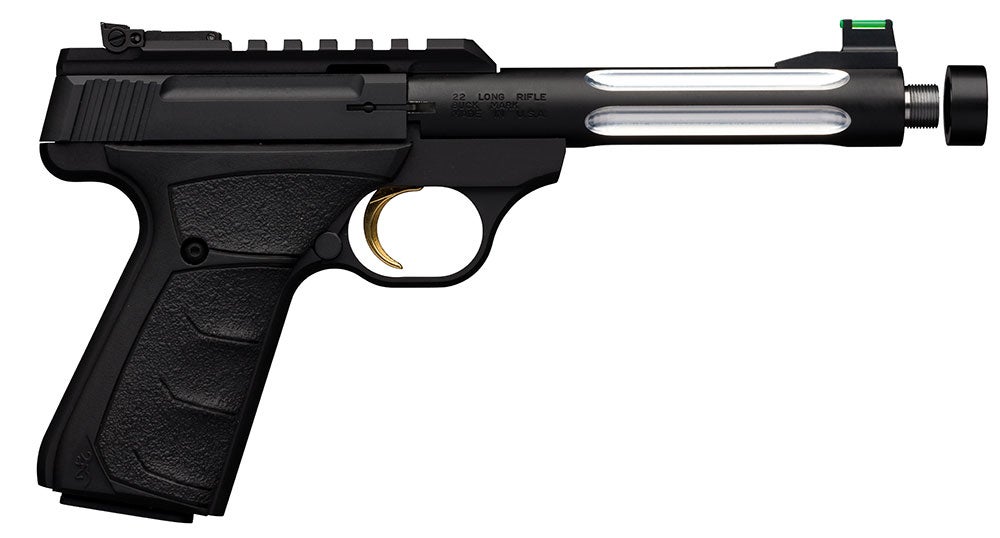 This new Browning Buck Mark is a fun .22 that’s suppressor-ready.

American shooters have been so fixated on handguns designed for concealed carry and personal protection, they often forget that shooting is fun—and that one of the most fun guns to shoot is a .22 pistol. Browning has not forgotten. Their new Buck Mark Lite Fluted UFX Suppressor Ready has fun written all over it. It comes with a great set of target sights, but its top rail is compatible with just about any type of red-dot sight you might like. Its feeds from 10-round magazines and, as the name suggests, it’s ready for a suppressor. $620; Browning —R.M.

Do you need a gun the size of a Super Redhawk to handle the 10mm Auto? Of course not. But it sure is fun to shoot, even with big-boy hunting loads. With three included moon clips, it’s fast to reload, too. The gun comes ready to go with Ruger rings, meaning you can top it with a real handgun scope. Now to be clear, I think the 10mm cartridge hits its best stride as a dual-purpose defensive and hunting gun in a service-sized autopistol. Still, there are a bunch of good, new 10mm rounds out there that are perfectly capable on whitetails and hogs. And nothing beats a good pistol scope for hunting. For a dedicated deer gun in 10mm, this might be the best option on the market right now. $1,159; ruger.com —W.B 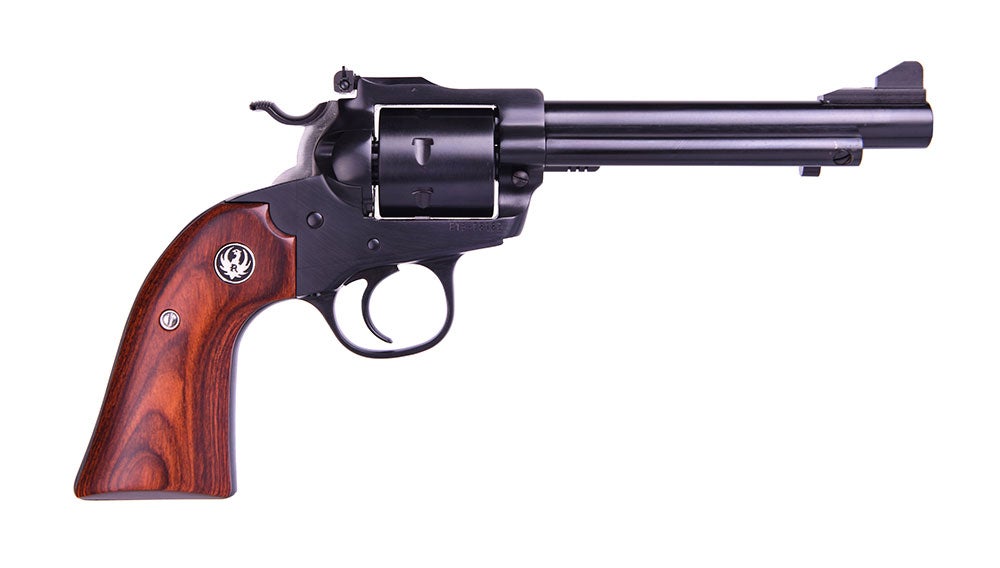 A Ruger Single Seven in .327 Federal, but with a Bisley grip.

The .327 Federal Magnum was originally introduced as a cartridge for self-defense, and never became very popular. According to Lipsey’s, a distributor that offers limited runs of various Ruger firearms, the .327 should have been marketed as a trail/general-purpose round. They clearly know their stuff, because Lispsey’s has sold thousands of Ruger Single Seven revolvers to hunters and shooters who appreciate the power of the .327 and the gun’s ability to fire other .32-caliber cartridges. For 2018, Lispey’s is offering a 5.5-inch-barreled Single Seven Ruger in .327 Federal, but with the Bisley grip. “Limited” means just what you think; best order one soon. $709; Lipsey’s —R.M. 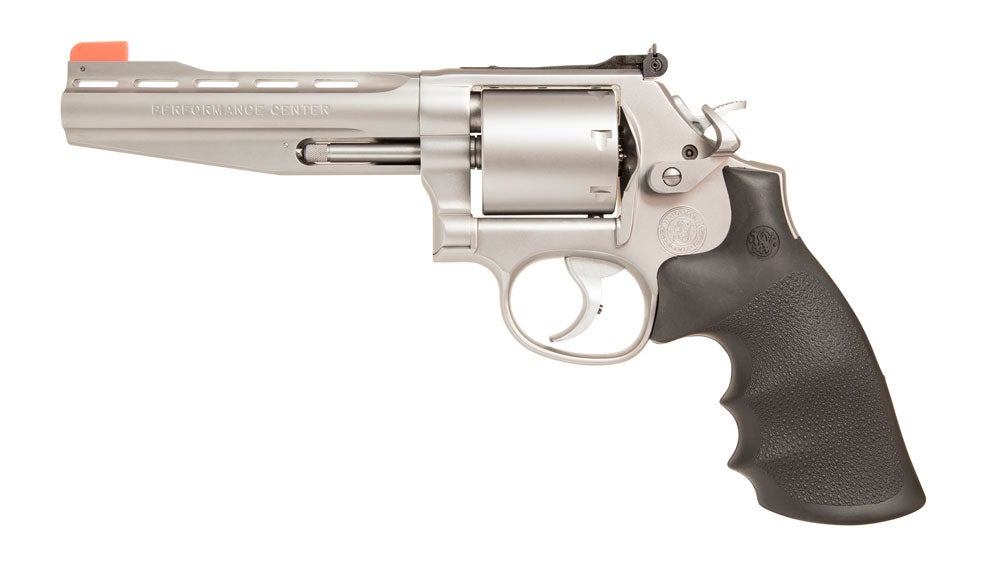 Smith & Wesson’s new Performance Center 686 Plus is made for competition, but is also just fun to shoot.

This is a gun made for competition, and I readily admit that I’m not a big competitive shooter. I am, however, a double-action revolver nut, and you don’t have to shoot with a timer running to appreciate a gun as smooth as this one. I have a standard 686 Plus at home that’s one of my favorite general-purpose guns. It’s stainless-steel, holds seven rounds of .357 Magnum, and would unquestionably be the gun I’d pick if I were only allowed to own one handgun. The new Performance Center version of the same revolver is predictably tuned and smooth, and has a variety of enhancements added in the name of speed, including a recessed cylinder for moon clips and an oversized, speed-release thumb piece for rapid reloads. It has a pronounced vent rib and interchangeable front sights, too. Could you use it for something besides competition shooting? Sure. I’m thinking tackling a bargain-sized bag of charcoal briquettes with a bucket of .38 Specials would be a good start. $966; Smith & Wesson —W.B. 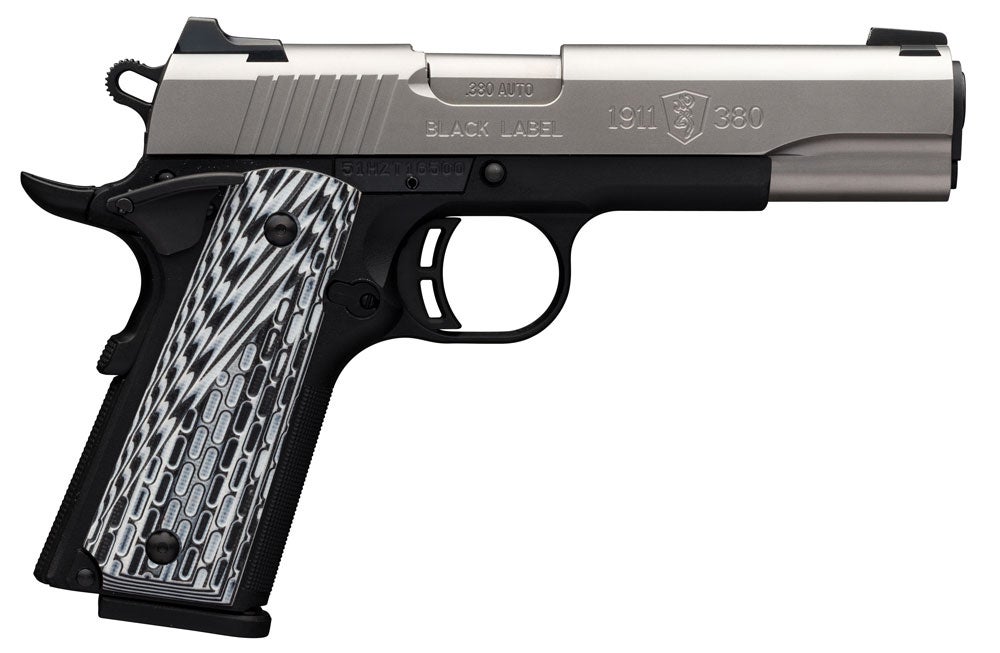 Browning’s new 1911-380 is only 85 percent the size of the original 1911 and is chambered for the .380 Auto. At 18 ounces, the gun is unbelievably light, and this secret-agent-sized pistol is loaded with features commonly found only on high-end 1911s. It has a satin stainless-steel finish on the slide, grooved black-and-white G10 grips, extended ambidextrous thumb safety, extended slide lock, beavertail grip safety, bar-dot combat sights, and it comes in an ABS carry case. Proportionally sized for the cartridge its chambers, this is a pistol you can carry all day for protection, or shoot all day for training, without fatigue. $800; Browning —R.M. 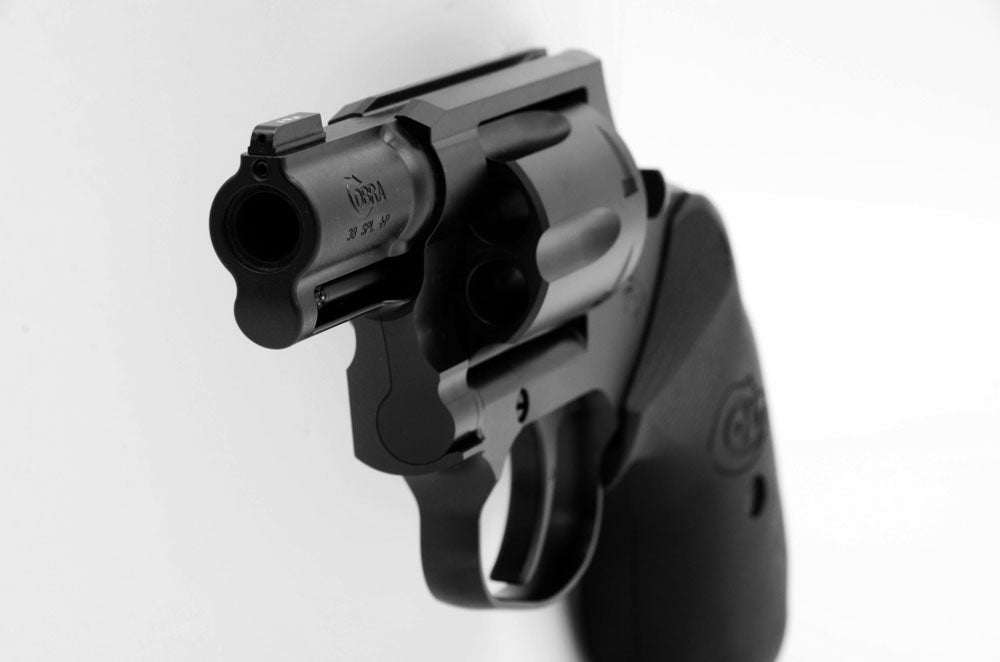 Colt’s Night Cobra is built to be modern carry gun.

Colt returned to the double-action revolver market in 2017 with the reintroduction of the Cobra, a stainless-steel .38 +P snubby with a six-round cylinder. The carry-gun market is competitive right now, dominated by single-stack polymer-frame autoloaders and chopped and bobbed 1911s. But snub-nosed revolvers continue to hold their place. The Night Cobra is built to be a modern carry gun. It’s covered with Matte black DLC (Diamond-Like Carbon) over stainless steel. If you carry much in the real world, you know that guns and sweat mix far more often than guns and oil. Every-day guns frequently end up with rust spots. I doubt this one will. The grip (called the Colt Custom G10) is comfortable and substantial—yet compact with rounded edges for a smooth draw. It comes from the factory with a bobbed hammer and night sights, but despite the modern touches, it still has that classy Colt feel. Silky double-action trigger included. $899; Colt —W.B.