In shotguns, the buzz of the 2018 SHOT show surrounds a pair of detachable-magazine pumps, from Remington and Mossberg. How...

In shotguns, the buzz of the 2018 SHOT show surrounds a pair of detachable-magazine pumps, from Remington and Mossberg. How they apply to our sporting purposes isn’t quite apparent to me yet, but they are definitely fun to shoot. Looking deeper, there’s no clear trend or breakthrough in shotguns this year. Rather, there’s a little something for everyone, including those high-capacity pump guns, several fine target guns, and a smattering of new traditional guns for Fudds like us. Here’s a look.

Remington’s new 870 DM might be the buzziest shotgun at the show. People line up for a chance to compete with other attendees at the Remington booth to see who can reload this gun the fastest in a simulated 3-gun stage.. The person with the best time at the show wins a new gun. Everybody else has to buy one. There are several versions, including a Model 870 DM Predator, clearly made for hunting, with a ghost-ring sight, 18½-inch barrel, tight choke, camo finish, and Remington’s SureShot semi-thumbhole stock. The 870 DM is available with three and six-round magazines. All controls are easy to use. There’s a large paddle release at the front of the mag well and extra-large slide release behind it. The mag well itself is attached to the bottom of a standard 870 receiver. $529 for base model, $799 for the Predator; Remington

The Citori White Lightning has gotten a makeover for 2018. It still features a silver-nitride receiver, but it’s now covered with deep-relief engraving. The wood got an upgrade, too, to Grade V. What I liked best about the gun, though, is that it shoots as good as it looks. The slimmed forend keeps your front hand close to the barrels, making the gun a natural pointer, and it complements the traditional Browning round-knob grip. The barrels, available in 26- or 28-inch, are overbored and feature Browning’s Vector Pro forcing cone to improve patterns and soften recoil. It comes with extended Midas choke tubes as well. I shot the 12-gauge at Industry Day at the Range and found it easy to hit with and soft shooting. $3,200; Browning

Franchi’s lightweight, alloy-framed Instinct SL over/under now comes in a 16-gauge version. At a weight of just 5.8 pounds, this new Instinct will live up to the 16’s reputation as the gun that carries like a 20 and hits like a 12. It joins Browning’s Sweet 16 A5 to offer bird hunters another choice in new lightweight 16s. Is this a trend? Probably not, but it is another very good option, and for that we can be grateful. The stock is AA walnut with a rounded Prince of Wales grip; the receiver is both matte and silver polished, and the barrels are 28 inches. $1,729; Franchi

“M” stands for “Mag-Fed,” and this new version of the Model 590 accepts 5-, 10-, 15-, and 20-round double-stack polymer magazines with steel feed lips. When I shot the 590M yesterday at Industry Day, I was impressed by how easily and securely the magazines snap into place. Once you empty a mag, you push an ambidextrous release at the front of the trigger guard, and it pops out. Personally, I preferred the handling of the Remington detachable-mag pump, but if what you’re after is fire power, this has more of it. In all other ways, this is the same Mossberg 590 that met the rigorous MilSpec 3443 requirements for a pump action shotgun. It features a top-tang safety and comes in both a bare-bones 18.5-inch-barrel version and a tri-rail version with rails for accessories, a vented handguard, and ghost-ring sights. The 590M comes with one ten-round magazine, and more are available as accessories. $801; Mossberg

When people ask me what they should buy as an all-around first shotgun, I recommend the A300 Outlander. Based on the very successful 391, the A300 is affordable, reliable, soft-shooting, and easy to maintain on those rare occasions it needs to be cleaned to keep shooting. Now, the A300 comes in a dedicated target version for those whose interests run more to clay than to feathers. The Sporting model has a 30-inch barrel with a wider, target-style rib and both front and middle beads. It comes with extended choke tubes, and the beefier stock features a redesigned grip with the right-hand palm swell found on many target guns. A shim kit allows you to fine-tune the stock fit, as well. While this gun is made with clays in mind, the 3-inch chamber makes it right at home in the field, too, where it would make a terrific gun for doves and waterfowl. $1,099 in 12 gauge; Beretta

The Syren line of women’s shotguns from Caesar Guerini and Fabarm expands this year to include a sporting-clays semiauto, the L4S Sporting. The Fabarm L4S is a terrific gas gun, one I use regularly for dove hunting. A look under the hood shows beautifully polished gas-system parts and a return spring on the magazine tube. Mine hits what I shoot it at, handles well, and never fails. The Syren version features the Syren stock designed to fit women, with a Monte Carlo comb, shorter length of pull, tighter grip radius, and some cast at the toe. It has stock shims for extra adjustability and lavender highights on the bolt handle and enlarged bolt release. It’s available with left or right-hand stocks, with 28- or 30-inch barrels. Starts at $1,895 Syren

Savage has brought one of the great names in American shotguns back with the A Grade Fox, the first double gun made in the USA for who knows how many years. Savage bought A.H. Fox in 1929, and made its guns through World War II, when they met the fate of all the great American doubles—death by progress. Expensive to make and out of step with a post-war taste for repeaters, the Foxes, Parkers, Ithacas, and others disappeared. Now the Fox is back. Made for Savage by Connecticut Shotgun Manufacturing Company and styled after the original A.H. Fox shotgun, internally this gun bears a strong resemblance to CSMC’s excellent RBL double. It’s a traditional double with straight grip and twin triggers, and it comes in 12 and 20 gauge versions, with 26 or 28 inch barrels. The gun has high-grade walnut and a beautifully case-colored receiver sculpted and lightly engraved in the style of the original A Grade Fox. The flush-mounted, nearly invisible choke tubes are one sign that this gun, despite its old-school looks, is a thoroughly modern 21st century double gun. $5,000; Savage Arms 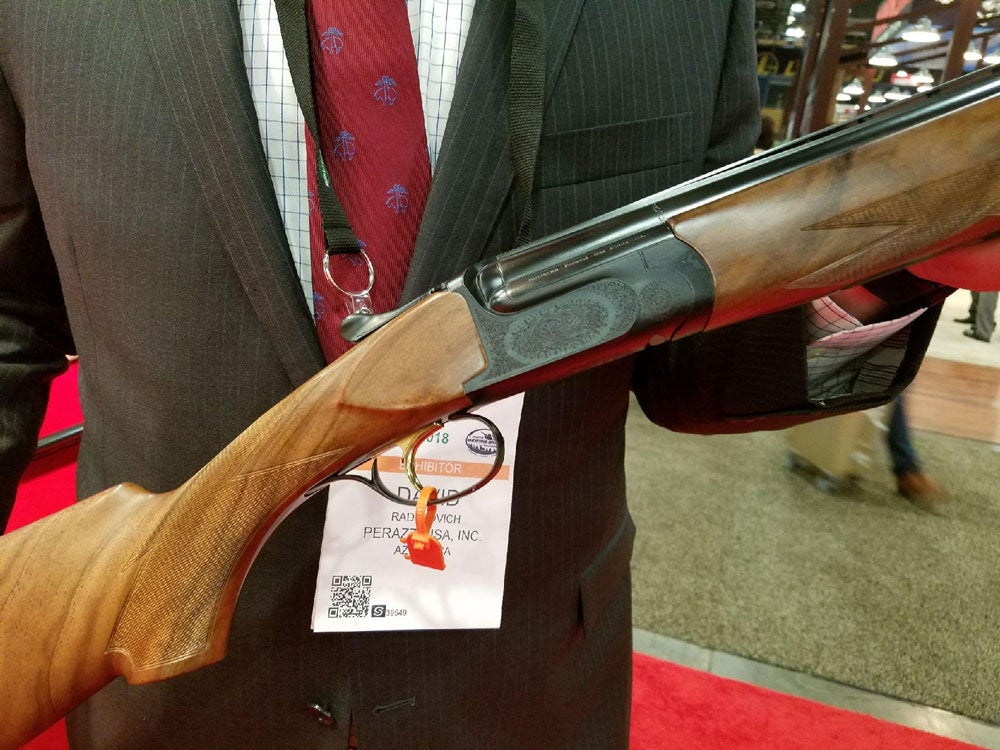 Because a person can dream, one of my favorite new guns of the 2018 show is this Perazzi MX Lusso game gun. Perazzis are best known as the choice of top clay shooters in all disciplines, but the company makes wonderful hunting guns, too, and the low-profile Perazzi action is a perfect match to a scaled-down 16-gauge receiver, as found on the MX 16. Understated and elegant, with a bit of scroll engraving, it’s a rich person’s game gun for the gentlemen who would forgo the gold inlays to remain unostentatious. That would be me, if only I were rich. $18,460; Perazzi