Aside from the big splash made by the Super Black Eagle III, SHOT 2017 wasn’t a huge shotgun year, although... 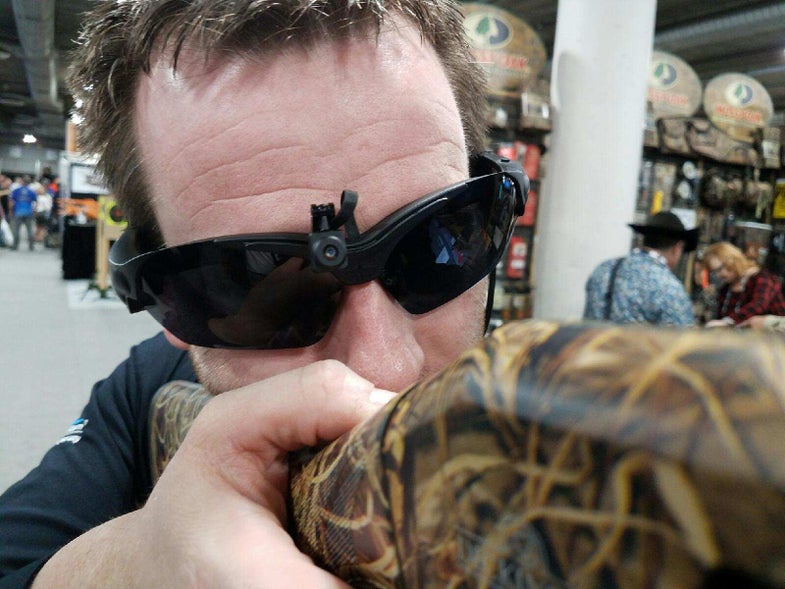 Aside from the big splash made by the Super Black Eagle III, SHOT 2017 wasn’t a huge shotgun year, although there were several guns of interest. Looking around for other shotgun-related stuff yielded a few interesting products.

AimCam: If you hate watching GoPro videos made by someone with a camera on their head or gun as much as I do, the AimCam is a great alternative. While the GoPro has a wide angle that makes birds or targets so tiny they disappear, the AimCam has a tighter focus on the bird. Equally important, most GoPro mounts don’t sight right down the gun, so it looks as if the muzzle isn’t pointing at the target. The AimCam sits on the frame of a set of glasses, and it adjusts so you can dial it in perfectly over your gun. The result is a perspective that looks very much like the first-person shooter games my kids play. And, it sells for just $250.

TangleFree Panel Blind: While I was at SHOT, we had a warm spell and a rare reverse goose migration at home, so my friends were killing geese while I was trudging the aisles. Perhaps it’s natural that, with geese on my mind, I found two waterfowl blinds to write about. TangleFree’s Panel Blind was introduced earlier this year, although it didn’t appear at last year’s SHOT. It’s a very simple three-panel field blind that can be combined with others to hide several hunters along fencelines, brushy field edges, river banks or whatever. It can also be folded down to hide one hunter on all sides. It has small viewing ports so everyone can watch birds without popping heads up over the top, and you can buy flip-top lids for it as an accessory, to keep you hidden from sharp eyes directly overhead. The blind sells for $300, and a set of three flip-tops is $150.

Final Approach X-Land’r: It is too often the case with good products that they are either improved and therefore made more expensive, or cheapened to fit into a lower price point, and therefore ruined. Manufacturers have a hard time leaving good things alone.

A perfect example was the Final Approach X-Land’r. It was a no-frills layout blind that required minimal setup, was very low-profile for ease of hiding, yet it was very comfortable. And, therefore, it was too good to last. It was discontinued and replaced by the horrible X2, a cheapened and worthless redo. Then the X2 was discontinued because it wasn’t any good and the X-Land’r was still gone. I was delighted, therefore, to see the original X-Land’r on display in the VistaOutdoor booth. Apparently enough people asked for it that FA decided to bring it back. And it is back, and even improved a little, with better, coated fabrics. $279

B&P smallbore ammo: I have saved the best for last: B&P has affordable small gauge target ammo. Twenty-eight gauge and .410 ammo shouldn’t cost as much as it does ($9-$10 a box and more), given that it doesn’t contain as much powder and shot than bigger gauge shells. I had always been told it was a question of sales volume. Baschieri and Pellagri, the Italian maker of very good target loads, offers .410 target loads for $68 per case, and 28s for $78, which undercuts everyone else by a lot.

B&P’s Kelly Sorensen says B&P maintains separate production lines for the small gauges rather than switching machines back and forth, and they are committed to charging based on the price of the components. However they do it, it’s great news for owners of little guns.