Should You Change Chokes in the Field?

During a hunt, if you’re worrying about choosing the right choke instead of getting yourself ready for the shot, changing chokes won’t help you—it’ll hurt you 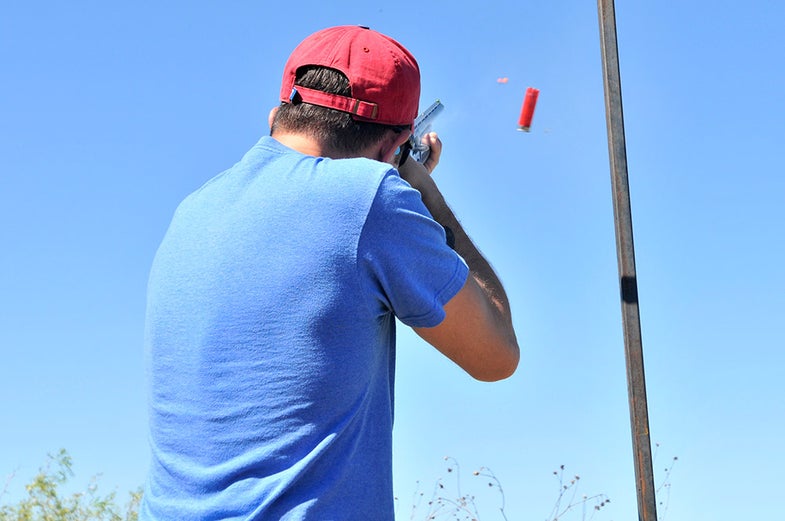 *Sporting clays, unlike hunting, is a situation where changing chokes on the fly may help you. *. Wikimedia Commons
SHARE

Back when I started hunting, my shotgun was an Auto 5 Light 12 that weighed a ton and had a vented Polychoke on the barrel. If you’re young and unfamiliar with the Polychoke, it was the shotgun equivalent of those adjustable hose nozzles that let you widen and narrow the spray with a turn of your wrist. I would twirl the choke in and out, setting it for the shot I expected next as I walked the fields. It didn’t really matter, because unbeknownst to me, the Polychoke had been twirled out so far that turning the collet didn’t make any difference. All it ever shot was Cylinder patterns.

If you can’t shoot very well in the first place, especially at longer ranges, and you’re carrying a 12 gauge that slings a lot of shot, a pure Cylinder choke is not the worst way to go. I killed a fair amount of game with that gun. But I digress.

Time passed, guns came and went, and interchangeable choke tubes become popular. It became possible to switch chokes in any gun. That said, I can’t ever remember switching chokes in the field, and I don’t think I’ve ever seen anyone do it, either. I would welcome insight from any who have.

That’s not to say chokes are worthless. Far from it: they let one shotgun meet many needs, but the instant choke-change feature is not one I take advantage of in the field. And, honestly, I keep the same tubes in most of my guns all the time: Light Modified patterns well with steel and tungsten-iron for waterfowl; Improved Cylinder kills doves near and far; and Improved Cylinder/Improved Modified gives me a first shot with a generous spread for flushing birds, followed by a tight barrel if I have to shoot again.

Sporting clays are a different story. You get to see the targets before you shoot, and you know exactly where you plan to break them. Why not screw in exactly the choke you need? The answer is, if it distracts you, it’s not helping.

I read a quote by skeet legend Todd Bender recently, who said by his conservative estimate, 70 percent of shots are missed before they are ever called for. If that’s true—and who am I to doubt Todd Bender—and if you’re worrying about choosing the right choke instead of getting yourself physically and mentally ready for the shot, changing chokes isn’t helping you, it’s hurting.

On the other hand, if it makes you feel more prepared and in control, go ahead and change. Some people bring enough choke tubes that they clank on their way around the course, and switch constantly while others keep it simple. Instructor Gil Ash recommends a good, simple approach. Bring two Skeet and two Modified chokes, he counsels. Look at the target. If it’s “close” use Skeet. If it’s “not close” go with Modified.

That’s easy advice to follow. If you don’t want to change chokes at all and you shoot an O/U, put a Skeet or IC choke in one barrel and Modified or IM in the other, and switch barrels as needed.