From the world’s largest grouse to the planet’s toughest sheep, from the Arctic Circle to the Australian bush, here’s what your wildest dreams are made of 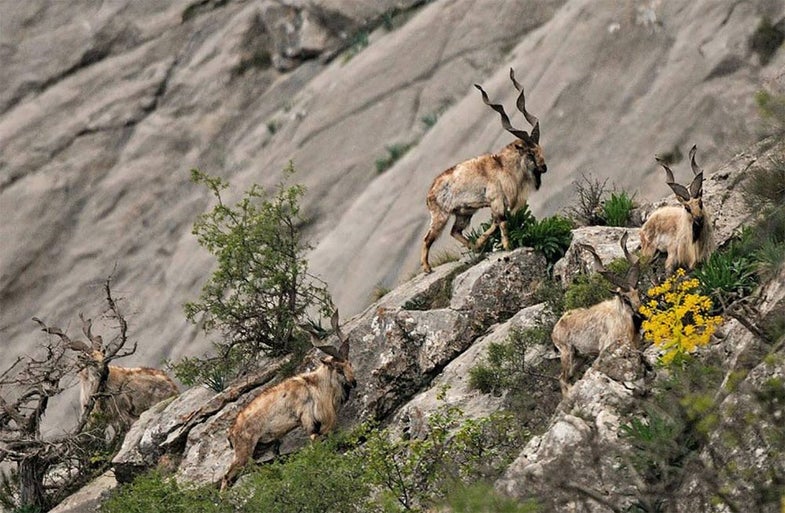 Markhor on a rocky slope in Tajikistan. Courtesy of the Hunting and Conservation Alliance of Tajikistan (H&CAT)
SHARE

All the world is a hunt camp. Or at least that was the feeling as I walked the aisles at the Safari Club International’s annual convention, held earlier this month in Las Vegas. Mongol outfitters with brochures on hunting with eagles sat two stalls down from a fly-in operation specializing in Yukon moose. There were layout hunts for graylag geese in Iceland, mountain hunts for snow sheep in Kamchatka, and more African adventures than you can shake an assegai at. Of all the incredible hunts I learned about at SCI, these six struck me as the most far-flung, the most exotic—the wildest. Some (O.K. one) are surprisingly affordable. Others cost more than a Maserati. All will have you dreaming about international adventure.

(Note on prices: In most cases, the figures below are entry points and do not include trophy fees, permits and licensing, airfare, tips, or taxes.)

This hunting excursion inside the Arctic Circle can result in three big-game trophies and includes some of the best char fishing anywhere. Lax-á outfitters established the first permanent hunting and fishing camp in Greenland in 2012 and have since run trips for musk ox, caribou, char, and small game. Hunting season goes from the end of July through September. The caribou typically come out of velvet around August 10. Greenland offers two subspecies of caribou, or reindeer as they call them: the native Barren Ground Caribou and the larger feral reindeer that was brought in from Scandinavia in 1952. But the big draw, of course, is musk ox. The best hunting for these Ice Age giants takes place on Greenland’s west coast. Hunter and guide motor along the coastline and glass up into the rolling tundra. When a trophy is spotted, the stalk begins. Herd sizes range from a couple to a couple dozen. Archery tackle is legal and close-range bow shots are very possible. “The game is plentiful,” said Lax-á CEO Árni Baldursson. “When we’re in Greenland, we only eat from nature.” Ptarmigan and artic hair hunts can be had from camp. Hunters typically fly from the U.S. to Reykjavik, Iceland, then board a puddle jumper to Narsarsuaq before a three-hour sail to camp. Hunts can be as short as three-days, so it’s worth considering layover opportunities in Iceland. Planning my dream Greenland hunt would definitely include a bonus jag for waterfowl south of Reykjavik.

The Russian Capercaillie is the world’s largest grouse, and during the May breeding season the big males sing a four-note song. Between the second and third note they go momentarily deaf, and hunters do what’s called the “capercaillie shuffle,” taking two steps, then freezing until the next call. It’s like a high-stakes game of red-light, green-light. World-renowned waterfowler Ramsey Russell personally guides this spring adventure and told me it’s one of the most exciting trips he runs. The window for the hunt is limited—only about 10 days, from late April to early May. American’s fly into St. Petersburg, then travel six to 12 hours into the Black Forest and stay at a traditional European hunt camp. Black grouse and hazel grouse hunting is also possible, making this a mixed-bag dream for the international upland hunter.

No list of exotic hunts is complete without a trip to Africa. Yet this adventure specializes in a critter many hunters don’t know. The yellow-backed duiker is the largest of the 22 duiker subspecies, and among the hardest critters to hunt in all of Africa. This elusive antelope, which grows to about the stature of a domestic goat, lives in the forests of central and western Africa. The surest way to tag one is via a trip to Central African Republic with Jacques Lemaux, who specializes in yellow-backs and the equally slippery forest bongo. Lemaux’s hunting concession is a mix of grasslands and dense forests, and the yellow-back and bongo hunts unfold at the edge of the two habitats. In the late evening and early morning, duikers trickle out of the forest to feed, at which point Lemaux and his client put on a careful stalk. The hunts run from late May through July, which is the peak of rainy season. It takes wet, muddy ground to find duiker tracks and get the hunt started, Lemaux told me. Local Pigmy hunters assist in camp and on the stalk. Lemaux strongly recommends the full 21-day combo hunt, as it can take that long to find a trophy duiker and bongo. If you’re looking for a challenging, deep African bush hunt, this is it.

Home to the planet’s highest peaks, Nepal offers mountain hunting unlike anything else. In 1991 the government closed hunting for all species except blue sheep, tahr, muntjac, hog deer, and wild boar, and the country has since become a destination for blue sheep and tahr combo trips. “This is an old-style hunt, as it was done 100 years ago,” said Bob Kern, the highly respected founder and CEO of The Hunting Consortium, which has helped open up several countries to international hunters over the years. “The trek to camp is a three-day hump—if you don’t want to use helicopters—with 20 Sherpas carrying the full camp kit. There’s no hunt like it anywhere in the world.” The season for blue sheep and tahr runs from March to late April, when the animals are found between 14,000 and 15,000 feet, and again in early October through late November, when they range from 16,000 and higher. If you’re into extreme, this is about as extreme as any mountain hunting gets.

There’s a rampant misconception that the feral water buffalo of Australia are in some way domesticated. This couldn’t before further from the truth, according to Simon Kyle-Little, who’s been running down big buffalo in the outback since 1988. Introduced to Australia from Indonesia between 1824 and 1849, the animals have been wild and free-roaming for almost 200 years. Aussie buffs even look different than their ancestral Asian forebears with wider, heavier horns. They can also be as deadly as any Cape Buffalo. “Just before this show, a guide of 25 years was almost killed. His career is probably over,” Kyle-Little told me. A client shot a good bull and during the track they didn’t notice a cow lying in a nearby thicket. She charged, connected, and nearly tore the guide’s calf off his leg. “He got off one shot from the hip before he was thrown,” Kyle-Little said. “If he hadn’t, he’d be dead.” So, definitely not domesticated.

For this down under dangerous-game adventure, American hunters typically fly to Darwin, then catch a charter flight northwest, before a final 12-hour drive into the Arnhem Aboriginal Territories–28 million acres of wild country. The terrain is flat, overgrown, and wet. Hunters can plan on 4 to 6 miles of tough walking per day. Shots are typically close, inside 50 yards, and if you connect early there are also opportunities for feral camels, wild ox, and boar, as well as excellent river fishing.

Ask dedicated wild sheep and goat fanatics what’s the hardest critter to hunt, and the conversation always veers toward markhor, the spiral-horned goat of Central Asia. There are three huntable subspecies in Pakistan and one in Tajikistan, but it can take years of planning to secure a hunt, if you can afford it. Pakistan only issues 12 permits a year. Tajikistan typically offers six or seven. Much of the proceeds from these very expensive permits go back into habitat management, which benefits markhor, Marco Polo sheep, ibex, and snow leopards, among other mountain species. Hunting fees in Tajikistan, for example, support a network of 150 rangers and more than 100 local families that help anti-poaching efforts, according to the Hunting and Conservation Alliance of Tajikistan. And the program has been a great success: Since the late 1990s, the number of wild markhor in Tajikistan has increased from only 350 to about 1,900 today. It’s not just the animal’s rarity that makes it special, though; the markhor stands taller than any other wild goat in the world and can weigh up to 240 pounds. And then there are the horns.

“Markhor” is thought to come from the Persian words for snake (mar) and eater (khor­)–a reference to those magnificent snake-like spiral horns, reminiscent of a kudu, and in some subspecies surpassing 60 inches. Whether hunting Pakistan or Tajikistan, Americans typically fly into the region via Istanbul, and then on to the respective capital cities. Once in country, a network of charter flights and caravans take hunters into local mountain communities, where many of the guides and porters live and work. Depending on subspecies and region, the hunts unfold between 6,000 and 9,500 feet, in landscapes that vary from subalpine oak forestland to nosebleed elevations well above the tree line. Markhor seasons generally run September through March, but vary by country, region, and year.