Snake Wrangling at a Kid’s Birthday Party. What Could Go Wrong?

Arizona man is bitten in the face by a rattler 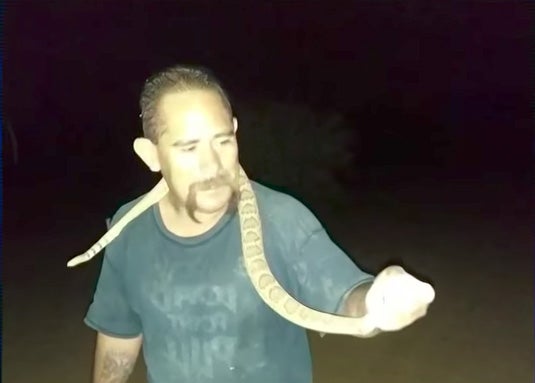 Stupidity never takes a holiday. That’s the lesson in a news story (video link below) about a Phoenix man who tried to wrangle and barbecue a rattlesnake at his son’s birthday party. Let that sink in for a moment. Your friends are entrusting their children to your care, and you decide it’s a good time to impress them by grabbing the same reptiles that you, every parent, schools, and park rangers have told to avoid. After all, Victor Pratt had been a snake hunter when he was 19—he’d been bitten then at least once—and rattlesnakes hadn’t evolved much in that time. He saw it and acted without thinking.

Pratt, 48, succeeded in grabbing the snake and posing for a few photos before starting the grill. But then he lost control of the snake and it bit him in the face. To his credit—and he clearly doesn’t deserve much for anything else he did that night—Pratt knew enough to get himself to a hospital ASAP. He was unconscious for five days and reportedly required 26 vials of anitvenin, but he recovered.

Was it a stupid thing to do? Overwhelmingly. Was it irresponsible? Yup. Was it made infinitely worse by the fact that he was showing off for both his own child and other children whose welfare he was responsible for? Double yup.

This particular incident is too recent to have elicited a great deal of comment. But you know what’s coming. Just listen to the smugness of the TV personalities in the video:

Channel 12’s newsman, speaking in ironic understatement, said, “He says his snake wrangling days are over. I think we’re all relieved to hear that.” And then he and both female newscasters have a little giggle.

The conclusion of nearly everyone who sees stuff like this is that it is only done by morons, people very different from you and me. People who deserve exactly what they get. In similar videos, I’ve seen countless scornful comments along the lines of “Serves you right!” and “Dumbass!” Then there are the gratuitously vicious ones. “I hope he dies,” and “Better to remove guys like this from the gene pool before they breed more imbeciles.” These baffle me. Why would anyone hope that another human being, in this case a father, dies? Where does that particular brand of snake venom originate?

I’ve read a bit about the peculiar nature of web vitriol. The ability to vent it both instantly and anonymously is a new thing in the world. Maybe it opens a direct path to our meanest selves, the devils of our worser nature. Maybe it’s an irresistibly secure place to spew out all the nameless rage from the indignities daily life heaps upon us.

I don’t understand how this works, but it’s worth understanding because we all do it. l will tell you this. When I see people like Victor Pratt at their worst, once that first wave of smugness dies, other feelings often show up. Like maybe I’m not that different. And that when something unexpected happens—a snake shows up, somebody’s pet tiger gets loose and strolls down the sidewalk, whatever—I might do something equally stupid. When I think of some of the incredibly dumb things I’ve done in my life, I’m mighty glad nobody had a video camera to capture it.