A Snakehead for Dinner

A slow day on the water yields an interesting, and delicious, fish 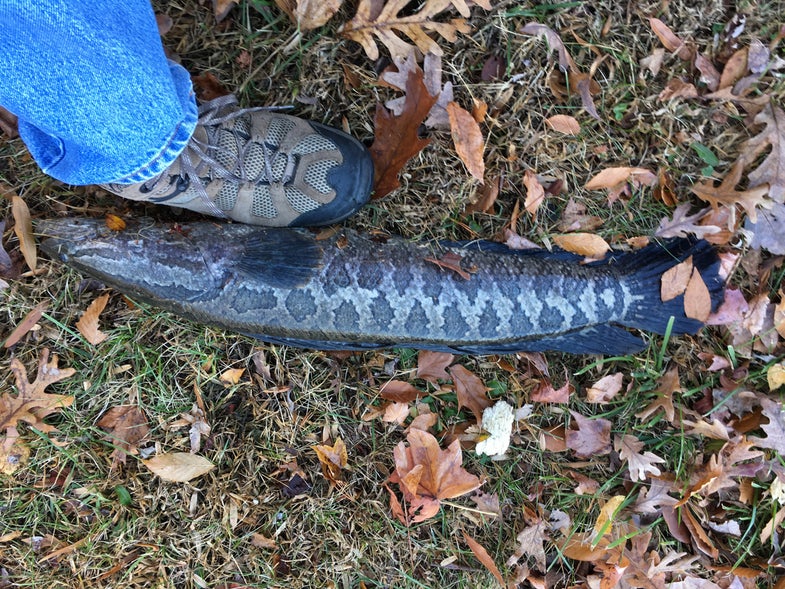 I’d been bouncing a tube jig off the flats near Mount Vernon on the Potomac River without so much as a bump for a couple of hours. The subaquatic grass had turned brown and brittle, so I had to clear the tube after each cast. I could have thrown a Spro frog or some other other weedless topwater, but I figured it was too cold for anything to have the energy to come up and smack it. I was fishing with my friend Ken Schmidt, who, being a Wisconsin transplant, has a Lund, which draws funny looks on the Potomac. As if he were wearing tights to a dinner party or something. Why are boaters snobby about this? Like you’re supposed to buy a new boat when you move?

As we drifted below the arch of a stone bridge into Little Hunting Creek, something grabbed my tube. It felt like a decent catfish—sluggish at first, as if roused from sleep. But the longer we tussled, the more animated it became. We were in 6 feet of water, but it took a good while before I got him up enough to see that I’d tied into a northern snakehead, Channa argus, an invasive fish from the Yangtze River basin. In other words, another Chinese import.

There was a good deal of snakehead hysteria when the toothy, scary-looking “Frankenfish” were first discovered in the Potomac, but their impact has been far less than anticipated. The real Frankenfish of the Potomac is the blue catfish, also introduced, which can live 30 years, grow to more than 100 pounds, and eats damn near everything: mussels, vegetation, and every other fish from shad to striped bass. The record blue in the Potomac is 84 pounds and likely to go up soon. In parts of the nearby James River, blue cats now account for 75 percent of the biomass. That’s bad news any way you look at it. But they’re not as scary looking as snakeheads, so there’s not much fuss.

I raised the fish to the surface four times, but he dove back down. A hooked snakehead is a motivated fish. At last Ken netted him. That’s when I noticed the tiny green wire attached to its back. The first snakehead I’d ever caught turned out to be a tagged one. And I happened to know from Rob Curtin, aka the Snakehead King, that reporting a tagged fish—you call the 800 number and give them the fish ID number, which was 7255 in my case—entitles you to a Snakehead Control ball cap and a certificate. Further, snakeheads are fantastic eating—a mild, white fish that’s forgiving to ham-fisted cooks like me.

We threw it in the livewell. Back on shore, I clubbed it in the head with a plank I found in the parking lot. I’d have guessed it was 6 pounds. I’d heard snakeheads were not the easiest fish to fillet, so I stopped by Paula and Gordon’s on the way home. Paula has a way with a knife. I gave her and Gordon one fillet and took the other home. That night, I baked it for 30 minutes at 350 with some garlic butter and lemon juice. Delicious. That such an ugly critter yields such delectable flesh is actually completely in keeping with the universe as I understand it. Take me, for example. While I’m not great looking, I’m an amazing person.

I called in the tag the next day, and two days later received a big envelope containing my hat and certificate (below). The fish had measured 26.38 inches when it was tagged in the same creek on July 2, 2017. So it was probably 28 or 29 inches when I caught it, because they grow like kudzu. And it hadn’t moved an inch.

Between dinner and a new hat, it turned out to be about as good a one-fish day as I’ve had. But I still have no idea how you go out and target snakeheads with hook and line. The biologist I spoke to said, “Well, when they’re hitting, they’ll hit pretty much anything you throw. When they’re not, you can throw anything at them and it doesn’t make any difference.”

I’m guessing I must have bonked mine on the head and gotten a reaction strike. But he sure was tasty.