The Snakehead King (And So Much More)

Rob Curtin sure knows his way around rivers and woods 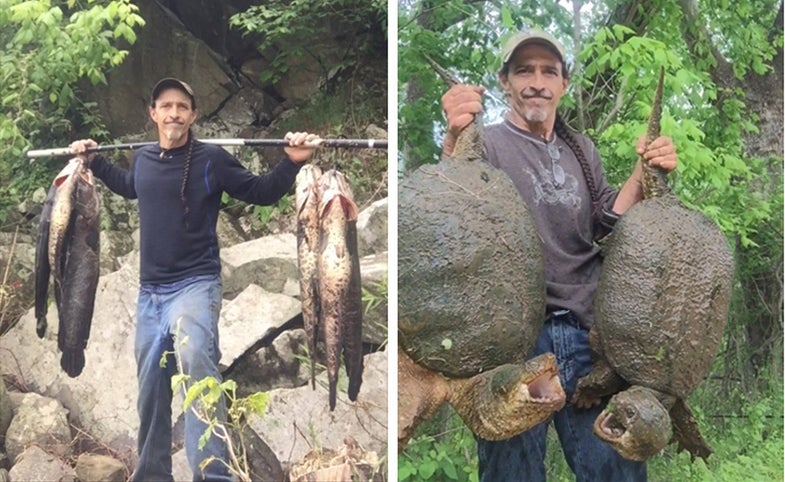 Curtin with snakeheads for a fish fry and two snappers. By Rob Curtin
SHARE

I’m trying to write a feature about this guy, so I don’t want to spill too many beans, but around Fletcher’s Boathouse on the Potomac, he’s known as The Snakehead King. He sight-fishes from the bluffs on the Virginia side, and when he spots a fish basking at or just below the surface, he descends so fast you have to see it a few times to realize that he’s not falling but just getting to the water as quickly as possible. He’ll snag them if he has to, but what he lives for is to spear snakeheads. He pins them to the bottom with a homemade spear, slips a gaff in from below, then lifts and swings them ashore. To spear, you have to be right on top of the fish. It’s more like hunting than fishing. He’s the only guy I’ve seen do this.

If the snakeheads aren’t moving, he amuses himself catching giant blue cats. He’s convinced that there are 100-pounders in the river, thinks he may have had a few on, but says they’re all but impossible to land in the fast water and sharp rocks where he goes for snakehead.

What I love about the guy is that he’s an all-arounder, a hunter-gatherer. He just loves being out there, being in touch with what nature is up to today. Sure, he hunts turkeys and deer with a recurve, but he also gathers wineberries, blackberries, and wild grapes. He knows where to find mushrooms: morels, chanterelles, oysters, hens and chickens. He knows the name—or so it has seemed to me on every outing—of every plant and critter we come across. And he can’t restrain himself from picking them up, whether they’re snakes or snapping turtles. He told me has had four beavers by the tail, two by accident that he didn’t see and somehow went after lures. The trick with beavers, he says, is to choke up close to the the body so they can’t turn tight enough to turn on you. He could be hosing me, but I don’t think so. His name is Rob Curtin.

Above are a few pictures. There’s a stringer of about 80 pounds of snakeheads that he donated to the Fletcher’s fish fry (they’re fantastic eating and went quicker than the walleye). And he saw the snapping turtles one day and “just had to pick them up.”