Snakes in a Toilet

Cassie McFadden was trying to get her two boys organized and out the door one morning when her younger son,... 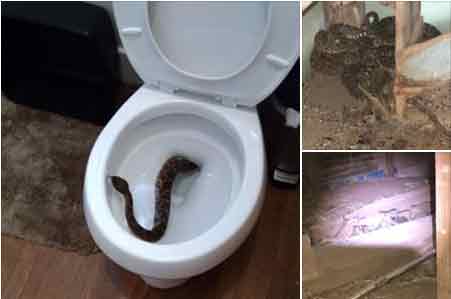 Cassie McFadden was trying to get her two boys organized and out the door one morning when her younger son, 4, reported a snake in the toilet. She didn’t think much of it at first. The family has stuffed animal snakes and rubber snakes. And most boys—including those up to the age of 45 or 50—will do anything to avoid going to pre-school, school, or actual places of employment. But when her older boy yelled confirmation, Cassie went to investigate. She discovered a fair-sized rattlesnake halfway out of the toilet, looking like an elongated bowel movement come to life and about to begin exploring the house.

She texted a photo to her husband at work, along with an unintentionally apt question—”What the crap do I do?” Jason McFadden told his wife to kill it and headed home. Cassie grabbed a broom in an attempt to confine the serpent to the bowl. It pushed past the broom and onto the floor. She upgraded to heavier implements—a garden hoe, a shovel, and loppers. Thus armed, she persuaded the snake to die. When he got home, Jason, being a prudent husband and father, called in a local outfit, Big Country Snake Removal.

Good thing, too, because it turned out that there were more western diamondbacks in the house. As in 23 more. There were 13 adult rattlers in the storm cellar and 10 more under the house. The one in the toilet had gotten in through a relief pipe.

The 23 others were released unharmed in an undisclosed location. Nathan Hawkins, who runs Big Country Snake Removal, says on the company’s Facebook page that western diamondbacks are “fairly communal,” so it’s not unusual to find them in groups. “The fear that is associated with snakes is…irrational,” he said. “They’re just—they’re unique. There’s nothing else on the planet like them.”

It’s true that of the 7,000 venomous snake bites annually in this country, only about five of these are fatal. The fatality rate from untreated western diamondback bites, however, is between 10% and 20%. So it’s a good idea to get bitten near a hospital if possible.

I have an irrational fear of venomous snakes. I didn’t grow up with them and have had almost direct experience with them. And I have the greatest respect for people who view snakes as a hazard that can be avoided or dealt with rationally. I just don’t happen to be one of these people. I only know what I read in Wikipedia. Which is that their venom contains a particularly nasty cocktail you shouldn’t drink—hemotoxins, cytotoxins, and myotoxins. This mixture causes extensive, often permanent, tissue damage, damage to cells and muscles that can result in failure of the cardiovascular system and heavy internal bleeding. Then there are the convulsions, vomiting, diarrhea, severe headaches, and other side effects. Also, it really hurts.

My recommendation is that you inspect any toilet you are about to expose your bare bottom to for rattlesnakes before sitting on it. Otherwise, it really could bite you in the ass.