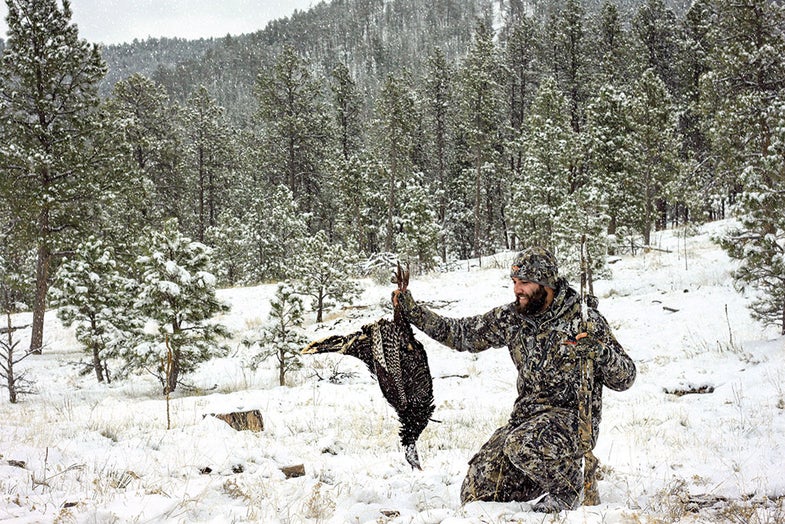 I was on my way to check one last piece of public ground for my evening hunt, when something out of place on the trail, covered with fresh snow, caught my eye: a set of turkey tracks. I hopped out of my truck for a closer look. They were small, but I hoped they belonged to a jake, rather than a hen. I grabbed my shotgun and set off to follow the footsteps like mountain lion hunters in the area had been doing a few months earlier after their quarry.

It had been a grueling day in the snow and cold of the Black Hills, but this line of prints took the bite out of the air. I crept alongside the tracks, making some quiet yelps along the way. At any moment, I expected a gobble back but didn’t hear a sound. I kept going.

Change in the Weather

I’d already had a successful spring turkey season, with an Eastern that I shot in early April and the new state-record Rio Grande that I killed with my bow not long after. To complete my South Dakota slam, I just needed a ­Merriam’s, and the Black Hills offered the best chance to get one.

As this is one of the few places in North America where all three species are found, I was in a unique position to take each bird in the same state and season. This would be my toughest turkey hunt yet, though, tackling unfamiliar public ground. The Hills are known for their abundance of birds and rough topography, both of which allow South Dakota to be liberal with its unlimited resident and nonresident tag allocation: There might be a lot of turkeys here, but they’re all hard-earned.

The Black Hills are also known for moody weather. According to the National Weather Service, Spear­fish experienced one of the most remarkable weather events in history with a 49-­degree temperature change in Dec. 1943, when the mercury jumped from minus 4 to 45 degrees in two minutes. The Köppen climate map tells a similar story, with a humid subtropic climate and a subarctic climate existing within just 50 miles of each other inside the Black Hills. On my hunt, I’d have both.

The day prior, it had been 70 degrees with clear skies. But that morning, I sat in my truck with the glow of my rearview mirror reading 25 degrees as a bland radio host warned that a foot of snow was on its way. I got out of the vehicle and stepped into total darkness. Tall pines cloaked the lights of Rapid City, and dense clouds eclipsed the moon and stars. As I started up an old logging road, the forest was dead silent. No wind, no footsteps, no songbirds and, worst of all, no turkeys. I could hear only the snow—now trending closer to ice—pelting off my hood before it began to collect in my beard. When the sun finally rose, the hills felt emptier than they did in the dark.

For two hours, I hiked the trail without hearing or seeing a turkey. I’d stop on tall ridges to glass the vast mountains, and call with hopes of coaxing a gobble. It was a fruitless hunt, and a march that only a desperate turkey hunter would make.

With these conditions, the birds were in survival mode. The blizzard drove the turkeys to bunch up and seek shelter and food near bird feeders and feedlots. With 1.2 million acres of public land at my disposal, though, the last place I wanted to see a bird was within eyesight of someone’s patio.

I stuck to the logging roads all morning and afternoon. When I’d get cold or tired, which usually took just a couple miles of hiking, I’d head back to my pickup and relocate to a new piece of ground. I did this three times, dreading the next time I’d have to get out of my truck to take my shotgun for a walk. I took the scenic route to the last trailhead, consciously getting behind schedule so I’d have more time to stay in my dry and warm vehicle. That’s when I spotted the turkey tracks.

After a quarter mile, I arrived at a steep cliff face where the tracks temporarily ended. If the turkey wasn’t on the other side of this, I figured, I’d start my descent back to the trail. Just over the crest, there stood my Merriam’s. I raised my shotgun—only to realize it was trained on the blue head of a hen. I brought the gun to my side, mumbling something about my luck with the unknowing bird at 30 yards. Accepting that this hunt was over, I kneeled in the snow and watched the hen. Then the bird turned broadside to me, exposing a 6-inch beard, making her legal to shoot with a male turkey tag. After I was absolutely certain the beard wasn’t a mirage that my greedy brain was projecting, I reshouldered my gun and touched off a concluding shot.

As I stood over the bird, I took a mental picture of the scene. This rare bird was a fitting reward to a demanding day afield—a salve for my aching feet, numb fingers, and chapped face. I’d do it all over again in a second.

Shock-gobbling is a weakness in the turkey’s armor, since it gives away a tom’s location on the roost. Hunters can use this to their advantage in areas they’ve never hunted; the technique is great in big woods like the Black Hills. The most common locator calls mimic an owl or crow and are most effective just before daylight. I like the H.S. Mega Hoot Owl Call ($12; hunterspec.com), which takes some practice but makes lifelike calls. If you’re able to get a tom to answer, move in on his turf and surprise him with a couple of hen yelps at daylight.