Last month ended without much fanfare in the South. It was the slowest November my crew has had in years.... 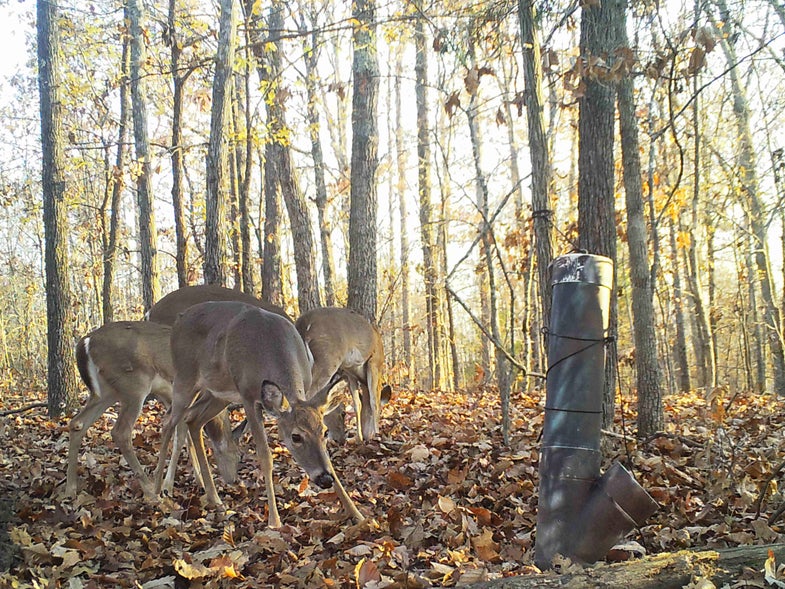 Does and fawns are beginning to gather into winter groups.. Will Brantley
SHARE

Last month ended without much fanfare in the South. It was the slowest November my crew has had in years. Much of the eleventh month was warm and windy, and combined with a bumper acorn crop, the deer just weren’t moving in places where it was easy to see them. The little action we did have happened during the latter part of the month, and in nasty thickets. All signs this year pointed to an early rut—but the best chasing action we saw was just before Thanksgiving. Many of my buddies hunting western Kentucky and northern Tennessee reported the same thing.

Last week, I took a road trip to Ohio to hunt the shotgun opener about an hour northeast of Columbus, at Wolf Creek Outfitters. Those guys had a similar report. Early November was tough, and then things began picking up. Though our first couple days in the woods were relatively slow (and the statewide harvest was down from the previous opener), the action picked up big time after a cold front passed through. Later in the week, everyone in camp saw at least saw a shooter buck—though we struggled a bit to get shots at them. One guy in camp killed a heavy 10-pointer, while the rest of us struck out.

After I got home, I made a run Saturday through my farm on the Tennessee line to pull trail cameras. The SD cards confirmed a flurry of daylight activity right around the first of December. It’s gotten cold here, and the deer are responding. Does and fawns are assembling into large, winter groups, and they’re hitting fields and bait sites better than they have in more than a month. Buck sign is opening back up, too. I found half a dozen fresh scrapes and several new rubs during my short walk.

Of course, down around the Mississippi line and into Alabama, things are really just getting started. The peak of the rut in much of northern Mississippi happens in early December. In the Alabama Blackbelt, the best action is still a few weeks away.

Despite the warm weather of the past month, we finally have a cold forecast ahead of us. Overnight lows are supposed to drop into the teens this week, and that’s exactly what we need to get those doe groups on their feet to feed. The peak breeding may be over in much of the region, but bucks haven’t lost interest just yet. This time of year, if there’s a doe group around, I promise you—there’s a buck or two not far away.