Southern Rut Report: Bucks Are Ready Despite the Heat

If you’re holding a buck tag, hunting in the South, and here for advice, I’ll tell you this: Don’t skip... 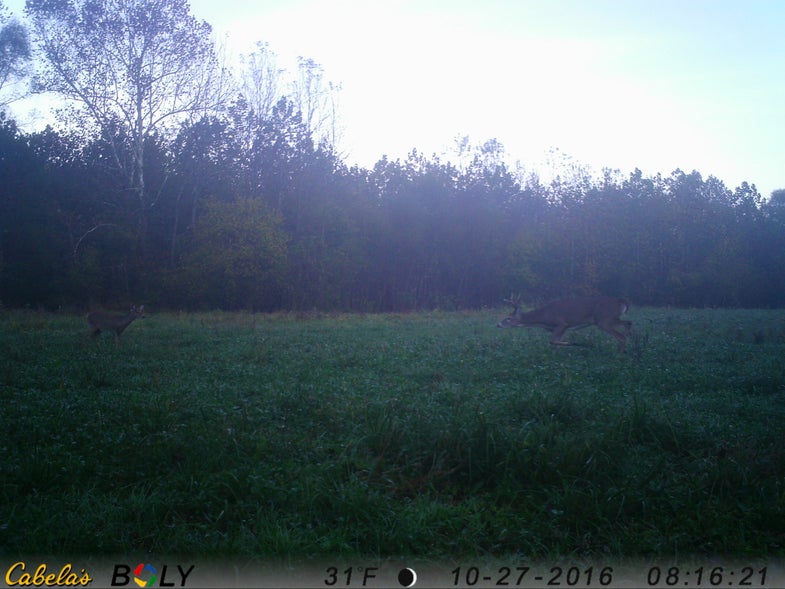 An 8-point checks out a young doe at 8:16 a.m. last Thursday. High temperatures mean that deer aren't moving during the daylight hours; instead, peak activity is happening at night and carrying over into the early morning. Courtesy of Cabela's
SHARE

If you’re holding a buck tag, hunting in the South, and here for advice, I’ll tell you this: Don’t skip a morning hunt right now. If you think your boss probably wouldn’t care if you showed up three hours late, tempt fate. Set two alarms if you’re prone to oversleeping. The bucks—including the big ones—want to move right now, and at night, they’re moving a lot. We’re on the leading edge of the seeking and chasing phase of the rut, which is easily the best part of the show.

Trouble is, it’s been hitting 80 degrees—even the mid-80s—most days this week, and it’s forecast to be the same over the next several upcoming days. Trail cameras and hunting reports alike show that the deer just aren’t moving during daylight hours like we’d hope and expect during this phase of the rut. The afternoon activity is mirroring the early season right now. We’re seeing a few does and fawns on their feet and feeding 15 minutes before dark, and that’s about it.

But the morning hours tell a different story. I pulled a couple trail cameras over the weekend. Each of them was set at the intersection of a firebreak and a large food plot. These places are deer highways, and right now, they’re torn up with buck sign. They’re capturing pictures of bucks working scrapes and bumping does throughout the night, when temps have been dropping into the 50s. But the action is carrying on a few hours into the morning as well. I captured photos of good bucks on their feet almost every morning last week—but the action was universally over by 9 a.m. Case in point is the nice 8-point in this photo checking out this young doe at 8:16 Thursday morning.

Truth be told, this weather is making it supremely difficult to see a big buck in legal shooting light. But the rut doesn’t wait on cold fronts. Continue to hunt smart, but if you have historically good morning stands for this time of year, don’t let the forecast stop you from hunting them. You only need one buck to make a mistake—and this time of year and for the next few weeks to come, they will be making mistakes.