In the seventh installment of our long-range series, we look at how to analyze your ammunition for long-distance shooting 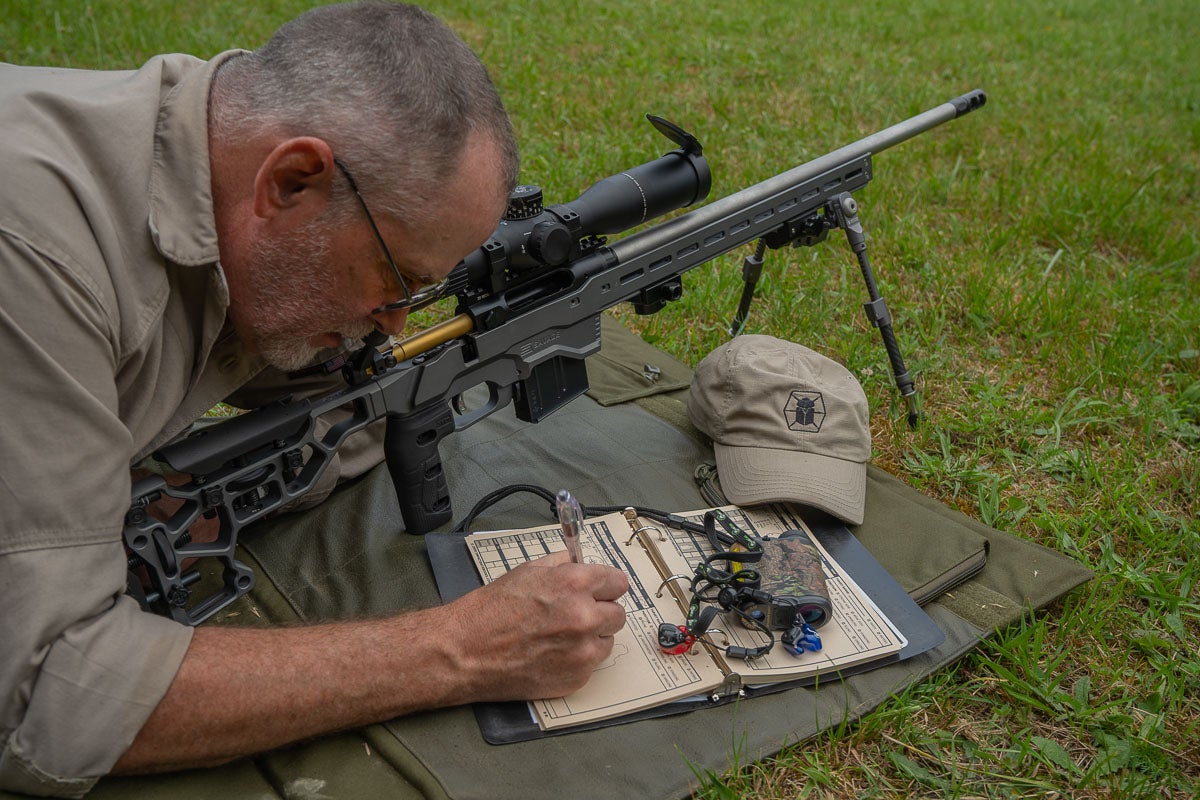 Not only must you select quality ammunition for your long-range shooting, you should keep comprehensive notes on its performance in your data book. Richard Mann
SHARE

The Long Game is a new series designed to improve your long-range-shooting skills. This story is the seventh installment.

Precision rifles are only as good as the long-range ammunition you feed them. To be successful at 1,000 yards, you must not only use quality ammunition—but ammunition that your rifle likes. When it comes to rifles and ammunition, even the best rifles can be a little picky. You’ll need to find a load that will deliver the external ballistics and precision you’re looking for. So, where you do begin that process?

Start by selecting a load—factory or handload—that uses a high BC bullet. Bullet BCs are generally listed as either G1 or G7, and G7 BCs are a more accurate representation of modern bullet’s ability to overcome air resistance. And, when fired at the same velocity, a difference in a G7 BC of .315 and a G7 BC of .335 can amount to a point of impact difference at 1,000 yards of 10 inches. With a launch velocity of 2680 fps, the higher BC bullet will arrive on target sooner as well. This means gravity and wind will have less time to act upon it. It also means errors in range and condition assessment are less critical.

Next, you want to make sure the ammo will feed and function properly in your rifle. Before you even attempt to shoot, cycle several rounds through the rifle’s action to make sure there are no hiccups and issues with feeding, extraction, and ejection.

Now you need to determine the velocity consistency and precision potential of the load. To do this requires a chronograph and at least a 100-yard rifle range. A perfect zero of the rifle is not necessary. You’re not shooting for accuracy; you only want to evaluate velocity consistency and precision. Still, you need to be able to hit the target so a rough zero on paper at 100 yards is required.

You can measure velocity consistency and precision potential at the same time. A box of ammo generally contains 20 rounds and that’s usually enough to ascertain how well your rifle will like a certain load. Fire four 5-shot groups, and allow the barrel to completely cool between each group. While firing these groups measure the velocity of each shot with the chronograph. When you’re done you should have an average velocity for 20 shots and four separate, five-shot groups to measure.

The gold-standard for precision is a five-shot group that measures less than an inch (one MOA) at 100 yards. This level of precision will allow for consistent hits at 1,000 yards. A smaller average group size is better, but it takes a very well-made rifle, quality ammunition the rifle likes, and a good shooter to consistently deliver that level of precision.

However, just because a rifle will consistently deliver sub-MOA groups at 100 yards, does not mean it will do the same at 1,000 yards. There are several reasons for this but the most common is inconsistent muzzle velocities. After firing your 20 shots, you should have a velocity for each shot. Take the first 10 shots and calculate the average velocity, the maximum velocity deviation, and the standard velocity deviation. Do this for the second 10 shots as well.

What you’re looking for is a very low maximum velocity spread and a very low standard velocity deviation. Standard deviation is often thought to be the most important velocity measurement but for long-range shooting the spread between the slowest and fastest velocity is very critical. This is because a large spread will be illustrated on the target vertically, the larger the velocity spread, the more vertical separation you will see.

For example, with a bullet that has a G7 BC of 0.335, the difference in the point of impact at 1,000 yards, between one traveling 2680 fps and one traveling 2640 fps, will result in a vertical separation of about 11 inches. This is actually quite good performance from factory ammo, and assuming the average muzzle velocity is between those two extremes, our load will still be recording a lot of impacts at 1,000 yards, since we’re looking at a vertical variation of 5.5 inches from the point of aim.

With high quality factory ammo, an extreme spread of 40 fps over 10 or 20 shots is about as good as you’ll see and if your standard deviations are 15 or under, you are good to go. With handloads these numbers can be improved a bit, allowing for an even greater level of confidence. You however must use a chronograph to discover these velocity variations because they will not be revealed by group size alone.

The ultimate goal when selecting ammunition is to find a load that delivers at least sub-MOA average groups at 100 yards, while at the same time meeting your minimum velocity variation thresholds. Good rifles and good ammo are required for this, but so is good shooting and shooting from the prone position will be covered in the next part of this series.