Rather than foam inserts, the KOR case provides protection through a unique patented bladder system 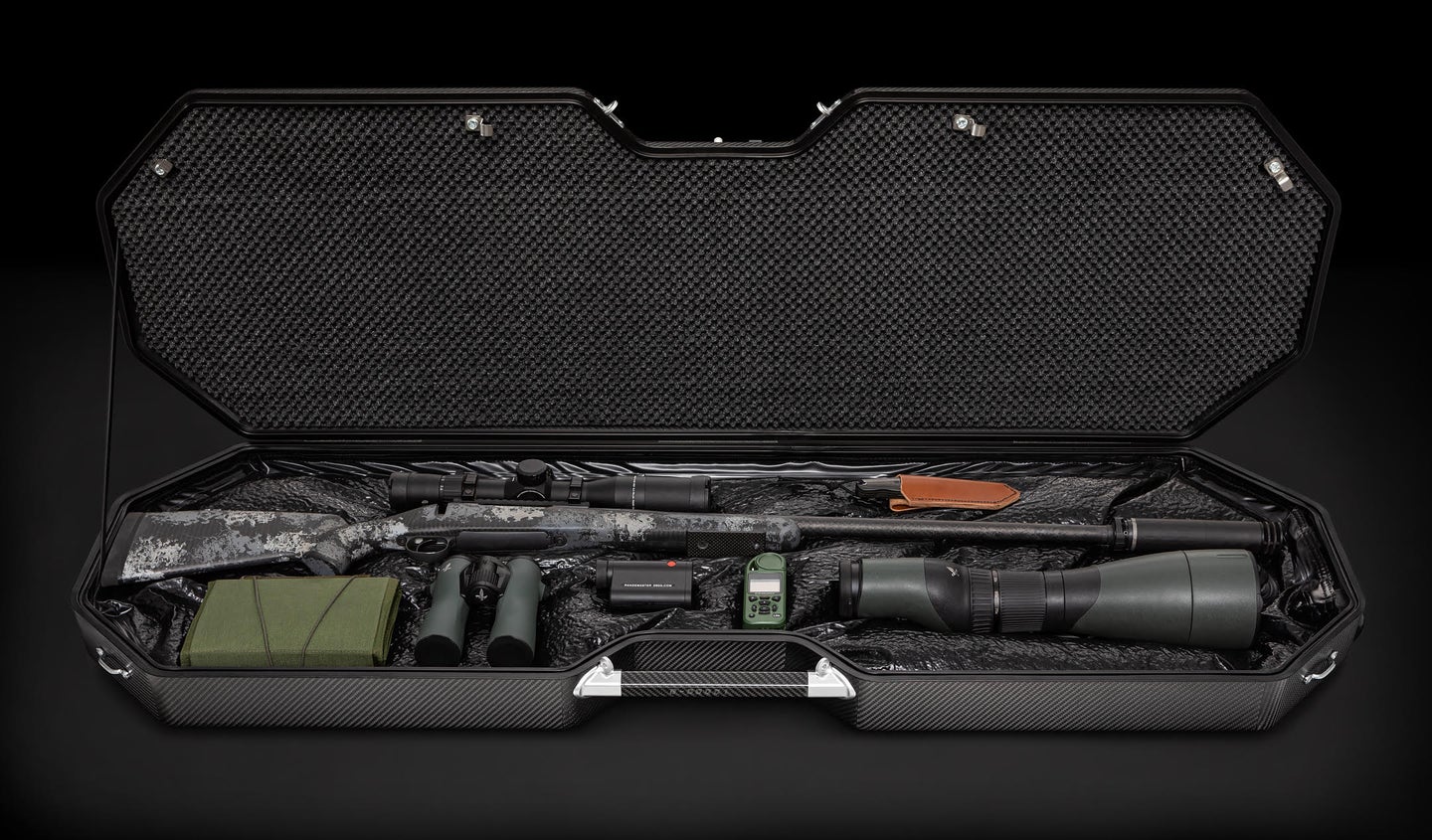 It has been said, many times, that “necessity is the mother of invention.” For western big-game hunter G.P. Searle, that moment of inspiration came from his wife as she was trying to organize the basement of their house.

She asked him, “Why do you need all these gun cases?” His response: “Because there isn’t one case that works for every trip.”

And with that, he began to think about building a better mousetrap.

The traveling hunter, whether he’s headed to Montana for elk, Wyoming for pronghorn antelope, or Africa for Cape buffalo, needs a stout case that can protect his rifle, scope, and other valuable accessories. Upland bird hunters also need such a device, especially if they fly to Argentina for doves, Spain for red-legged partridge, or Scotland for a driven pheasant hunt. This kind of protection isn’t cheap, and sportsmen who choose poorly often live to regret the choice when a battered case slides down the baggage carousel exposing a rifle or shotgun badly in need of repair.

Basically, Searle wanted to completely rethink gun case design. He had an edge, as he is the founder of KOR Cases, a company based in Scottsdale, Arizona, that develops ultralight, durable, and technologically advanced gun cases. So, he sat down with his engineers to discuss a new direction in case design and construction.

“By utilizing carbon-fiber construction, our-patent-pending breakthrough vacuum technology, and advanced design, we came up with an entirely new case, which we call KOR. I believe it will change the way sportsmen carry their firearms to the field,” he says.

“Until now, firearms and sensitive accessories had to fit in pre-cut foam forms, which meant each firearm required its own case. But KOR’s revolutionary design employs a patent-pending Vacuum Rigidizing Structure ™ (VRS) technology that creates enveloping custom forms around any type of gun and accompanying gear. This means that instead of a case for every type of firearm, there can be just one case for all.”

Here’s how it works. You place the firearm (or firearms) you wish to transport on top of a specially designed bag inside each KOR case. Then, you attach a hand-held syphon pump, which is included with every case, to the valve and begin to pull out the excess air. As you do this, the space between the fill material decreases and transforms the bag’s media from a fluid to a solid state. Once complete, the bag will hold the objects in their original position until the VRS valve is released, allowing air to re-enter the bladder. The vacuum will hold the shape of the objects and significantly reduce the vertical and horizontal movement of these objects during transit. The process takes no more than two minutes to complete.

The case is roomy enough to also hold valuable accessories, such as spotting scopes, rangefinders, and hunting knives. You’ll even have room for ammunition.

To match the custom protection provided on the inside, Searle also went to work with his engineers and designers to strengthen and streamline the case exterior. For that, he looked to the racing world, which for years has used carbon-fiber construction to make Formula 1 cars lighter and stronger. Six layers of such material in each gun case create the sort of tensile strength found in steel cables, resulting in a tough but sleek exterior.

Searle and the team then fashioned chamfered edges that absorb the force of dropping, stacking, or other mishandling during transit. Seamless Kevlar hinges have no moving parts, thus assuring the hinges will not separate from the case under duress. The KOR case is waterproof, dustproof and thermally stable to -75 degrees F.

The design process wasn’t a straight line from prototype to finished product.

“About 18 months ago I received a pre-production prototype at my house,” Searle says. “My two young boys wanted to play with it. They jumped on and off of it, and they must have turned the key latches one hundred times. After they were finished playing, I went to pick up the case. I forgot to ensure that the latches were closed, and upon picking up the case the top shell fell open and one of the hinges failed. It had delaminated from the case. As a result of this failure, we added a mechanical bond by incorporating rivets into the hinge to ensure this does not happen to a customer.”

KOR cases are available in two versions. The 13er (13-pounder) Twill Carbon sells for $1,699. The Camo Carbon is $1,849. The 19er has wheels and an adjustable pull strap, making transport through airports a breeze. You’ll also notice four “footman” loops on each corner of this case. These can serve as convenient tie-down sites for the drag strap or securing the case while in the field to a UTV, boat, plane or horse. The Twill Carbon is $1,899. The Camo Carbon is $2,199.

KOR cases are available directly from www.korcases.com. Searle prefers to sell direct to the consumer in order to assure high quality and great customer service. He also says that with the purchase of a KOR case, the company will ship the customer desiccant packs free for five years.