What do do when life hands you a cinder block 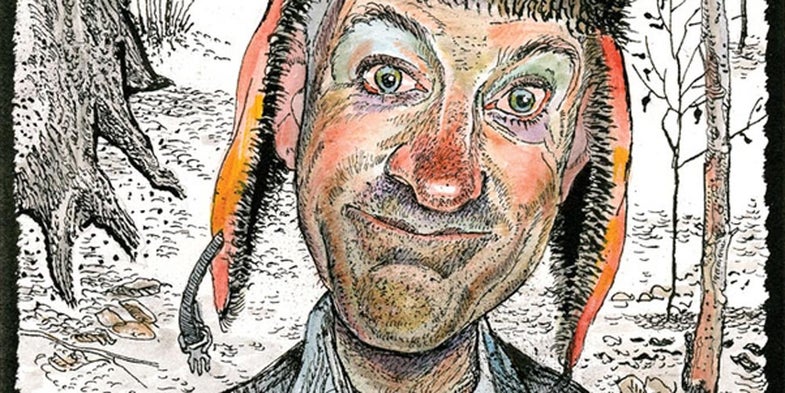 Around the time you think you’ve earned a bit of peace and predictability, life springs the trap door beneath your feet, your feet churn like in a Road Runner cartoon, and you start to fall. “I’m too old for this crap,” you protest as you plummet. To which life shrugs and smiles. “Maybe not.”

While no single part of the crap I’m too old for is remarkable, the combo platter is more than I bargained for. To wit:

• I’m recently and unwillingly single, six months out of a seven-year relationship that—for all its faults—was the most solid I’ve had. I miss my ex when I’m awake or asleep but am fine the rest of the time. She seems to have grieved and moved on. The very notion of the grief “process” eludes me. I understand processed cheese, hair, and tax returns. But grief? I might as well ask my garbage disposal to process a cinder block.

• I’m back in a town I left four years ago so I can be closer to Emma during her senior year of high school. By the time you read this, she’ll have graduated and decamped to Denver with her mom. By then I’ll need to be in a smaller house with lower rent. That will take more initiative than I’ve been able to muster in months.

• Mom’s gone. Five weeks now. She was 90, in hospice care, on morphine for pain and to relax the throat muscles that would seize up and leave her panicked and unable to breathe. Her spirit was ready, but the body gets its own say in such matters. At first, I was just relieved that her suffering had ended. Then I was just stunned. I hardly remember giving her eulogy, except that I followed a minister and family friend who believes in the gospel and just tore it up. I stood clueless at the lectern before a ­silent congregation. “Well,” I finally said, “I think I just found out what it feels like to be John Denver following James Brown.” The reality T-boned me a week later. No matter how long you’ve had to prepare, you’re not ready. The death of your mom turns you back into the boy still inside, the one who needed a lift to reach the water fountain. You are that boy and you are now an orphan. Nobody on Earth will ever love you unconditionally, whether you are a saint or a psychopath.

So, to one extent or another, the three women in my life are gone. It’s not the ideal time to be alone and working from home in an almost-strange town. If, for example, you find yourself offering free cognitive restructuring to a late-night TV pitchman selling Chinese kitchen knives, maybe you need to get out more. It’s still too early for fishing here. I tried for the migratory white perch that usually show first on the flats off the boathouse parking lot. Nobody home. I walked upriver and threw shad darts for an hour. I liked that at least my hands had something to do. But when the cormorants just sulk from their rocks midstream, you eventually reel in and go home. I’ve been shed hunting, but either the antlers are MIA or I am. All I’ve found are two bleached, gnawed relics from years past. They look like skeletons of skeletons.

The Buddhists say there’s a tsunami out there bearing down on each of us. Until then, I keep reminding myself that I’ll do better by focusing on what’s here than what isn’t. Sure, my vertebrae are like a string of cheap Christmas lights, and the doc has warned me off anything—like humping a backpack or a 72-pound ­canoe—that might further compress them. Still, with trekking poles and pre-­emptive Ibuprofen, I can manage to do 10-mile hikes with Emma. I’m looking into a lightweight fishing kayak. Once—like full-size rental cars or the right mattress—I’d have thought this an expensive indulgence. Right now, a $3,000 kayak seems like money well spent.

The present is made more vivid and urgent by a growing awareness of mortality. This current moment—I mean right now, this instant—is all any of us has. It also happens to be the only place you can get a good piece of pie. Right now, Emma and I are in Utah for spring break. She chose Utah “because it has cool rocks.” We’re bumming around various parks, not knowing where we’ll hike next or spend the night. It’s costing about $5,000 that I don’t technically have, but it’s been worth it from day one.

A couple of hours east of the black hole of Las Vegas, the road appeared to run smack into a mountainside. Instead, it entered the maw of the Virgin River Gorge, rock walls soaring out of sight on both sides of the road. We corkscrewed around spires and over bridges. It was dizzying, gorgeous, and alive. Emma momentarily lost her 18-year-old cool. “I can’t believe this!” she shouted. “This is the craziest thing ever! If we don’t see anything else this whole trip, this is…insane!”

If you are the father of an 18-year-old girl, you’d give your left one for a moment like this.

Emma will be gone soon—which I dread—but now isn’t the moment to focus on that. Maybe the best I can do before the tsunami arrives is try to live in the moment, not get too attached to my endless judgments about things, to be happy while I’m alive. I’ve been forgetting and relearning this all my life. Is that a bad thing? Once again, life shrugs and smiles. “Maybe not.”