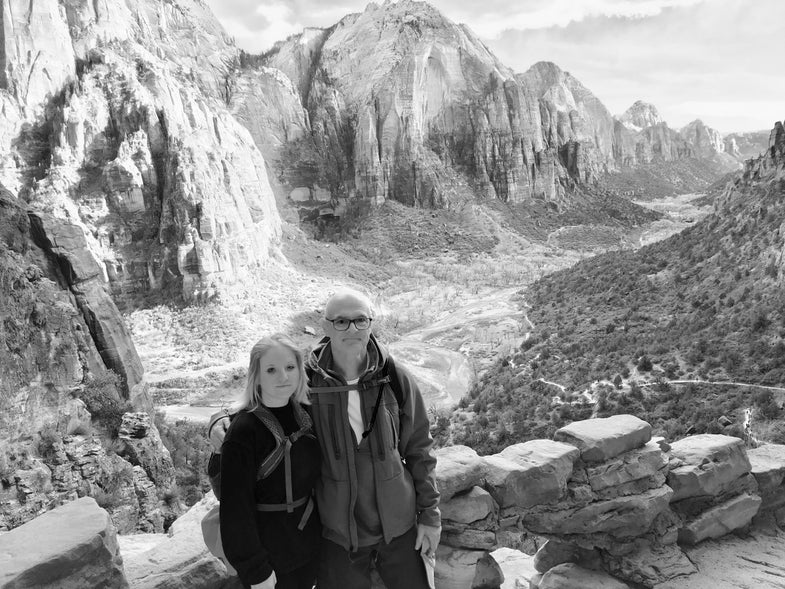 I will never again rent a car from Expedia. They tempt you with rates that are lower than the car company’s own website, then find some way to stick it to you. Emma and I were told at the Las Vegas Airport that our car wasn’t there but downtown at a hotel named Circus Circus, a mere $40 cab ride way. There was nothing the car company could do, since the booking had been through a third party. I’ll spare you the details of attempting to deal with Expedia customer service, except to say that if it were possible to assault someone through a phone line, I’d now be in jail.

But we made it to Zion National Park, which is ridiculously gorgeous and, because it’s spring break, ridiculously crowded. Being no smarter than other people, we opted for its most popular hike, Angels Landing. It’s about 5 miles roundtrip, with 1,500 feet of elevation gain, and it has spectacular views. It’s not really dangerous unless you let go of the heavy chain bolted into the rock for the last half mile or so leading up a knife-edge ridge to the top. Six people have died on it since 2004. It’s actually surprising that it’s that low.

When we got to where the chain started, I got—there’s no polite word for this—scared. I saw crowds of people crammed onto rock ledges waiting their turn to ascend or descend the chain and little kids scampering around like goats. The people going up and down the chain in the distance looked unnervingly like ants. Emma was keen on going, and I told her to have at it, that I’d be waiting. I spent a worried 90 minutes wondering if she was okay before she reappeared, ebullient, saying it was about the coolest thing she’d ever done and that she was proud of herself. She also noted that a little boy had been running free along the ledges, jostling people in the heedless manner of boys, which scared the crap out of her. He could easily have bumped someone over the edge.

We made it down. I took a photo of a couple from Guatemala, who obliged us by taking one of Emma and me.

It is a stunning place. Go, but avoid spring break if at all possible. Zion is one of the most-visited parks in the country, hosting 4.5 million people annually. Budget cuts have limited and trail maintenance and cut the museum’s open hours to just 4 per day. One metal post meant to anchor the chain had broken cleanly in half, so the Park Service had made a temporary repair, bolting it to a pine tree. In the meantime, the pine tree has been all but uprooted. It ain’t safe.

By all means, go. If you see a little kid running around dangerously, swatt some sense into him. It’s undoubtedly a criminal offense, but it beats a 2,000 foot drop.