Stand Your Ground, but Watch Your Legal Footing

Before you shoot, know that your right to self-defense is mired in a legal and political minefield 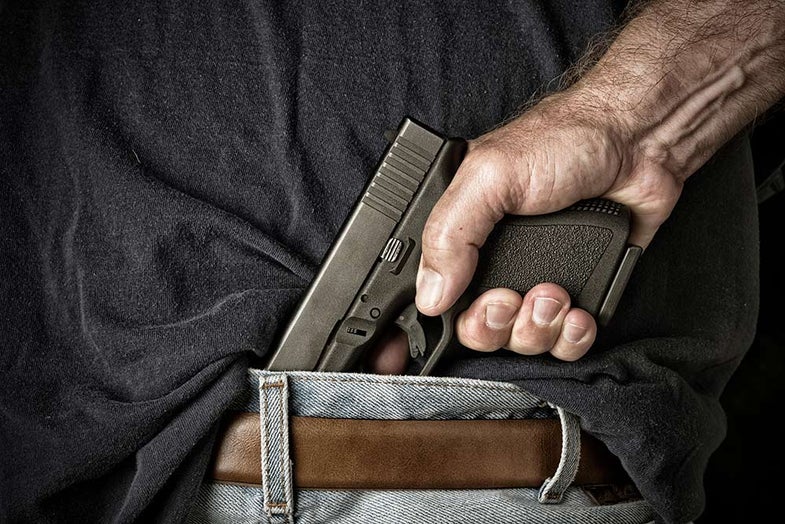 “Stand Your Ground” is an alleged remedy for laws that require you to retreat, not fight, in the face of danger, regardless of the circumstances. Thirty-three states have Stand Your Ground laws in some form or another. In some states, the law is being weakened. In some, it’s either being strengthened or is not on the books and has been proposed. In some states, it applies only in the home. In other states, it has force in the home, but with limitations—you can shoot intruders in some rooms, but not in others. In short, confusion reigns. This hell’s brew is good news for lawyers. For people who go heeled in the belief that they have the right to shoot in self defense, it’s a trap.

This was illustrated yet again by a shooting in Clearwater, Florida, in July. After an argument over a parking space at a convenience store, Party A shoved Party B to the ground, hard. Party B then drew a handgun, causing Party A to back away, facing him, hands halfway raised. When Party A was roughly 10 feet away, Party B fired, mortally wounding him.

The local sheriff declined to charge Party B based on his understanding of the Florida Stand Your Ground law. However, the state prosecutor whose jurisdiction it was, disagreed. After a nine-day review, Party B was charged with manslaughter and is currently in jail, unable to make his $100,000 bail. If he’s tried and convicted, he’s looking at 30 years.

This wretched business reinforces what has been preached in every self-defense class I’ve taken, and by every cop I’ve known, which is a lot of cops: The law on self defense shooting is not what’s in the statute books, but is what the District Attorney says it is. And, since district attorneys and sheriffs are elected, the political popularity of prosecuting or not prosecuting a case is going to be a major factor. If you think that such decisions are based on the facts and on the law alone, there is a bridge joining Manhattan Island to Brooklyn that I would like to sell you.

When Party A broke off the attack and retreated, the matter should have been over. If Party B had not fired, it’s unlikely that the police would have even been called. If the cops had come, there might not have been an arrest. They would have warned A and B to stop acting like assholes and checked to see if B had a carry permit, and that would have been that.

Then there is the Rule of Equivalent Force. This may not have the force of actual law, but it always figures in cases of this type, and says that if you punch me in the snout, I’m entitled to punch you in the snout. I’m not entitled to take a tire iron out of the trunk and stove in your skull, or pull a gun and shoot. Before you ignore the Rule of Equivalent Force, you should consider how you’ll look dressed all in orange, and what kind of person you’d like as a cellmate.

The old-time cops I knew very often boasted, at the end of their careers, that they never had to draw their guns, or if they drew them, they never had to shoot. (One retired New York State trooper I know fired one shot in anger in 20 years, and that was at a Saint Bernard that had run amok and had to be put down.) By keeping their revolvers holstered, they saved themselves a ton of grief.

If you pull that trigger, you may not find yourself going to city hall for tea and medals. Quite the opposite, in fact.

And now, a Monstrous Omission on My Part: In my review of The Fighters, I said that Michael Herr’s Dispatches was the best book on combat in Vietnam. Not so. It must share that honor with A Rumor of War, Philip Caputo’s 1977 masterpiece. Caputo was a Marine platoon commander who served in Vietnam during the earliest days of our involvement. The book has been translated into fifteen languages, has sold two million copies, and a 40th anniversary edition was published last year.

I don’t know what the hell I could have been thinking, or not thinking. To paraphrase General Lewis Armistead, “I have done both Philip and you a great disservice, which I shall never cease to regret.”