Staying Safe in the Turkey Woods 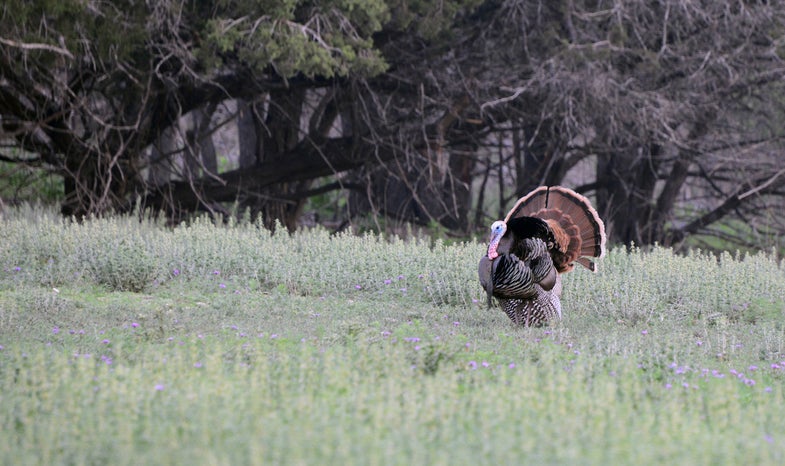 Turkey hunting has always been about the most dangerous kind of hunting around. You’ve got armed guys in full camo calling and chasing a very spooky animal. The guys are jittery, eager, and desperately want to kill a bird. These are the perfect breeding grounds for what safety experts call “premature closure,” which is jumping to a conclusion before you’ve got enough information to justify pulling the trigger.

With the advent of fanning or reaping, the potential for premature closure goes up by orders of magnitude if you’re hunting on public land where there are likely competing hunters or if you and your partners don’t first formulate a safe careful hunting plan and stick to it. Now you’ve got partial visual evidence of a gobbler along with the calls being made by whoever is doing the fanning.

Just last week, on opening day in Kansas, two brothers and a close friend split up into two parties at dawn to hunt their private lease. Three hours later, two of the men were calling from behind a fan as they lay on their bellies. Unbeknownst to them, the third was stalking them. At some point, at some distance, the stalker fired a 12-gauge at the fan, striking both men in their faces and upper bodies. He was able to help them walk to his vehicle and drove them directly to the Girard Medical Center. From there, they were airlifted to Freeman Hospital West in Joplin, Kansas. Two days later, they were still in critical condition and had yet to be interviewed, so some details aren’t entirely clear.

It really doesn’t matter. One detail that is clear is that a man shot his brother and a close friend and that this didn’t have to happen.

I’m no expert on turkey hunting or turkey hunting safety. Your state DNR site probably offers safety tips. Maryland’s are here. RealTree has some here with photos showing how things might go wrong.

You don’t need to be an expert to realize that the smart attitude to take into the woods with you is the same one they teach you in driving school. Hunt defensively. Watch out for the other guy. Each time you set up, anticipate what might go wrong, and which direction trouble is likeliest to come from. Assume that anything that looks and sounds like a turkey is another hunter until you are 100 percent sure it’s not. Itchy turkey hunters fire at movement, so if you see another hunter, freeze and call out to him or her in a loud, clear voice.

Anytime you’re on the move in the turkey woods, you’re a target. Wear orange. Even if you’re only getting up to pee. Many hunters will wrap the the trunk of the tree in orange tape before they sit down. This seems wise. Turkeys see orange tape all the time. If it isn’t moving, they won’t perceive it as a threat. If you’re lucky enough to get a bird, put it in a bag or tag it with orange tape immediately.

Lists of rules are great things. But so is a realistic fear of the guys around you. Assume the woods are full of the dumbest guy you ever hunted with. A bit of self-doubt is also a good thing. If you’re sure you’ve got all the bases covered and you’re okay, that’s a pretty sure sign that you don’t and you aren’t.