Stop Asian Carp From Getting Into Lake Michigan, Win $1 Million 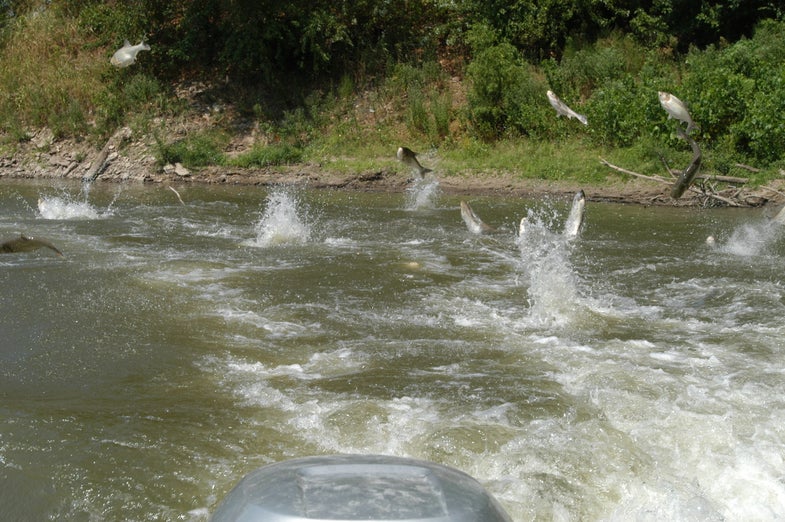 A school of silver Asian carp leap from the water. Jason Jenkins/Flickr
SHARE

Federal agencies recently announced that they’ve set aside $42 million to prevent Asian carp from reaching the Great Lakes. Officials say that the money will go toward numerous projects, such as fortifying defenses at Lake Michigan, reports the Associated Press.

The Michigan Department of Natural Resources has a slightly different plan, however—reaching out to the public. The state has launched a global search for innovative ways to prevent Asian carp from reaching the Great Lakes. They’re offering to compensate the person or party with the best proposal $1 million.

Though $1 million is a lot of cash, what’s at stake for the DNR is worth way more than that. The Great Lakes support a $7 billion fishing industry, and generate another $38 billion from recreational activities, both of which Asian carp could jeopardize.

The current threat lies at three electric barriers on the Chicago Area Waterway System, where silver carp and bighead carp are just 10 miles from entering Lake Michigan. If the carp make it through the dams, they’ll no doubt wreak havoc on native species and boaters, as they have elsewhere.

So, if you’ve got a solution for this looming crisis, the DNR would like to hear from you. They want ideas at any stage of development, from concepts with sound rationale to projects that are already in testing. For more information, or to submit your proposal, visit Michigan.gov.