The Story Behind the SCI World-Record Alligator 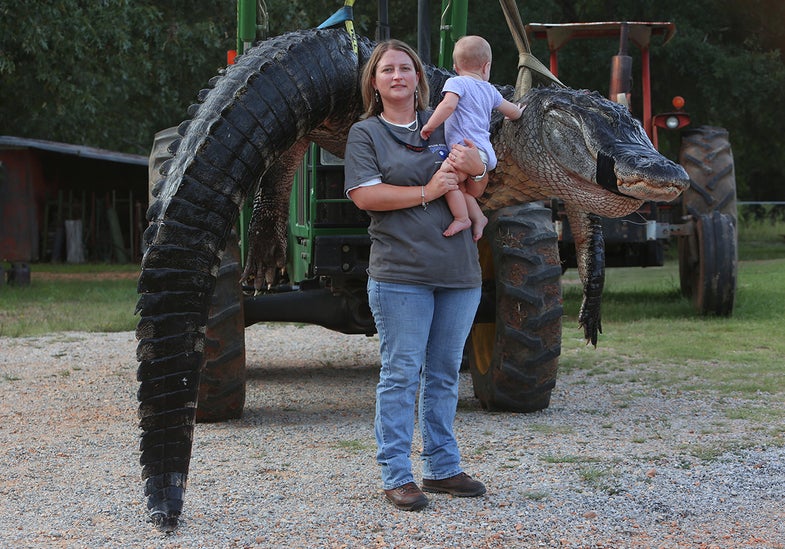 We’re taking a look back at one of the biggest gators ever caught. Mandy Stokes, a mother of two from Alabama, killed the SCI world-record gator in 2014, and the feat remains just as impressive today. Here’s the full story behind that record-breaking reptile.

Stokes is a lifelong deer and hog hunter. But gator hunting was a new interest. In fact, she killed her world record, verified by Safari Club International, on her very first gator hunt. The American alligator she tagged on Aug. 16, 2014, measured 15 feet 9 inches long, and weighed 1,011.5 pounds, besting the former SCI record—a 14-foot 8-inch gator killed in Chalk Creek, Texas, in 2008. Stokes’s trophy is currently on display at Millers Ferry Powerhouse on the Alabama River in Camden, Ala. “He’s a sight to be seen,” Stokes says. “This is the truth: Every time I see that alligator mount, I say to myself, ‘How in the world did we do that?’ It really is remarkable.”

For her very first alligator hunt that August night, Stokes—along with her husband, John, and brother-in-law Kevin Jenkins—borrowed a 17-foot aluminum boat to take out. In true Southern style, she wore pearls and perfume to stalk alligators that evening. “My husband sniffed the air and said, ‘You have perfume on?’” Stokes recalls. “Pearls are part of that story, too. I wore my pearls hunting that gator.” But Stokes wasn’t messing around, as the monster she wrangled would prove.

At around 10:45 that evening, the team hooked into what they knew was a big gator. But the reptile, though hooked and lined in multiple places, sat on the bottom of the slough for an hour and a half. It held to the bottom for so long, in fact, that Stokes thought he had drowned—until it started walking across the bottom of the slough toward some lily pads. That’s when things got interesting for Stokes and her hunting partners.

“There were stumps everywhere, cypress knees,” she says. “His head came out from under lily pads, I pulled the trigger, and the bullet ricocheted.” The gator took off, with Stokes and the crew still attached to it. The gator jerked the boat through the water. “He snatched the boat and smashed us into the stumps,” she says. The boat nearly flipped, she says. “Somebody really could have gone into the water. It was pretty serious.”

After the boat nearly overturned, the three hunters considered whether to cut the lines and let the gator go, but ultimately decided to give it one final attempt. With one snare left, Jenkins hooked the gator’s lip and slowly raised it to the surface. With her husband holding the light, she stood ready with the shotgun. “When his head broke water, I had the gun right where it needed to be and pulled the trigger,” she says. “He immediately rolled over just belly up. Two back feet sticking up. The first thing that came to my mind was, Wow, that’s a big foot. We got a really nice gator here.“

Turns out, the gator was better than “really nice.” It was the world’s largest, setting the record at 15 feet 9 inches long, and weighing 1,011.5 pounds.

The hype that followed the hunt made going to work nearly impossible for Stokes, she says. She soon found herself juggling family and media attention while traveling with a full-body gator mount around the South for appearances. “It was extremely busy,” she says. “I got to know reporters like I never thought I would. It got real hectic so we try not to take [the gator] places anymore.”

The taxidermist found a 3-year-old doe, two squirrels, a duck, and part of a cow or calf in the alligator’s belly. That impressive autopsy has not kept Stokes off the water, however. She went gator hunting again this year, though she was not lucky enough to catch one. “We ended up empty-handed. It was awful,” Stokes says. “We were all fired up thinking it was going to be great. …We couldn’t kill a little gator this year.”