Yes, You Can Go Ice Fishing For Catfish. Here’s How 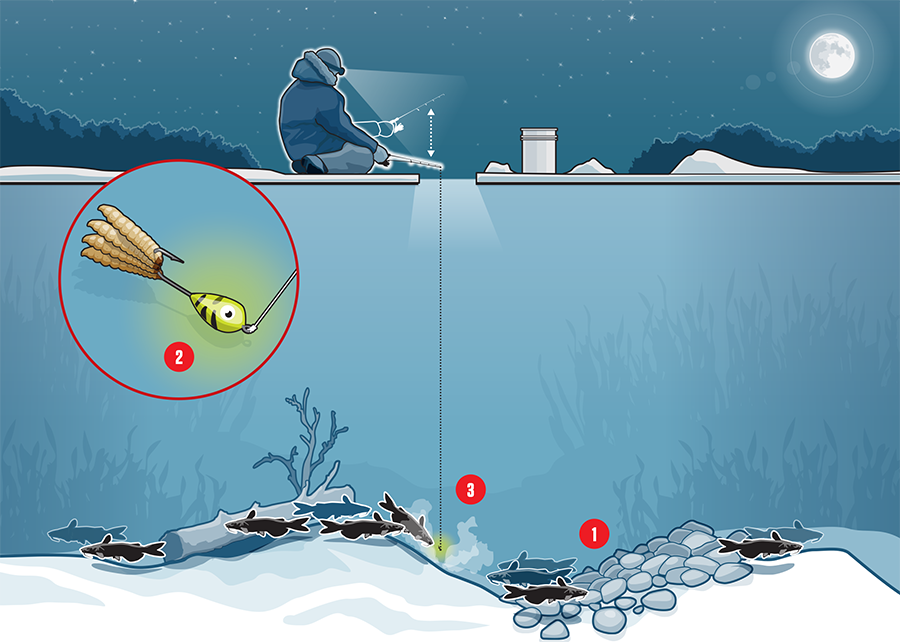 Summer isn’t the only time to reel in catfish. Mike Sudal
SHARE

Dog days and catfish nights are a hallmark of summer, but the whiskered fish don’t just bite when it’s balmy. They feed all winter long under the ice and, when hooked on a light jigging rod, put up a much better fight than trout or walleyes. The trick to catching a mess of them is getting the first one on the line. After that, the action should be drop-and-reel.

How to Catch Catfish Through the Ice

A catfish’s metabolism slows down considerably in winter. As a result, they seek out the warmest water, which is often found in the deepest hole in the lake. If you find one catfish, you’ll usually find a dozen or more, all lying close to the bottom, tucked tight against humps, rockpiles, or wood structure.

Read Next: Getting Wild on the Ice for Yellow Perch

2. Use glow-in-the-dark baits at night.

Just like summertime cats, wintertime whisker fish are most active at night. Dawn and dusk are good, but if you can stick it out until well past sundown, you’re likely to be rewarded. Cats under the ice also respond well to glow-in-the-dark baits and jigs, and the later it gets, the more effective these become.

3. Work baits on the bottom to shake things up.

Even for bigger cats, smaller baits are more productive, so stick with fathead minnows, juvenile chubs, and my favorite catfish bait: three or four waxworms threaded onto a tiny teardrop-style jig. Drop your baited jig down to the bottom and work it aggressively. This action stirs up sediment and starts a feeding frenzy.

Lean on longer rods to win hard-water cat fights. Catfish hooked on an ultralight combo are fun to fight, but between the energy of the fish and the need to work it up into a hole in the ice, the angler often loses the battle. For this game, I leave the panfish rods home and step up to a longer, medium-action stick. The 29 1⁄2-inch Whiteout from 13 Fishing does a great job of wrenching winter cats through the hard water.

Read Next: When, Where, and How to Catch Ice-Out Catfish

Can you catch catfish in the winter?

Yes. A catfish’s metabolism slows down as the weather gets colder, but it’s still possible to target them during the winter. Try fishing deep warmer water and using a jig to stir up the bottom and entice the fish to strike. If you can find one catfish under the ice, you’ll likely find a whole bunch of them.

What’s the best bait for catfish in the winter?

If you’re ice fishing for catfish, try fathead minnows, juvenile chubs or three or four waxworms threaded onto a small teardrop-style jig. As said before, glow-in-the-dark baits can work really well after dark. No matter what bait you choose, or what size fish you’re targeting, stick to smaller-sized baits.

Is it better to ice fish in deep or shallow water?

When it comes to catching catfish through the ice, water depth is important. Stick with deep, warmer water rather than shallow water. Catfish usually feed 6 inches to 4 feet from the bottom during the winter. Depending on local regulations, you can use rigs like tip-ups to probe different depths at once. You can also use a sonar or camera to find where catfish are holding under the ice.