Don’t let tough conditions keep you off the ice. Brave winter weather and hook up like the pros 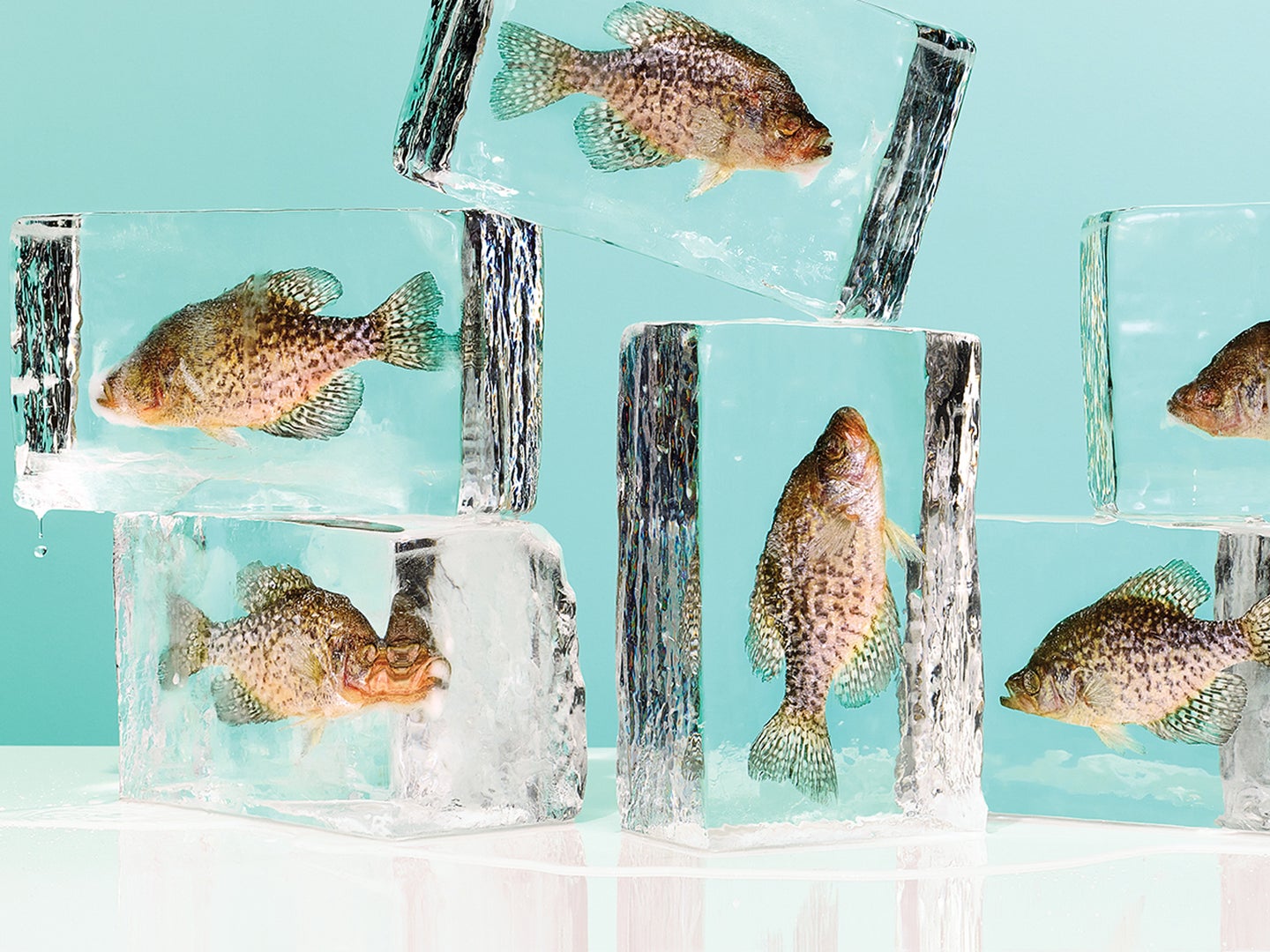 During the hard-water season, everyone loves to wake up to an unseasonably warm air mass, near normal barometer, light wind, and bearable precipitation. Too bad that combination of conditions comes around so rarely. When Mother Nature throws a curveball on the day you plan to fish, you have to make the call between toughing it out or sitting at home. If you’re an ice-fishing guide, choosing the latter means no pay. I talked with four of the best guides in the country to find out how they keep the rods bent during the toughest conditions on the ice. Their tips and tricks can help you turn what would have been a couch trip into the ice-fishing trip you’ll never forget.

1. Hook Shallow-Water Crappies in a Blizzard

If the news is calling for a blizzard, the average ice angler is staying home. Kloet says that’s a huge mistake. Crappies and other panfish actually get very aggressive before and during a storm; you just have to know where to find them. According to Kloet, crappies stay deep for most of the winter, sitting just off the bottom in 20 to 22 feet of water. As a storm moves in, however, the fish will move up in the water column, suspending as shallow as 5 or 10 feet. If you didn’t know to make that depth adjustment, you’d be fishing below the fish.

Kloet takes advantage of the crappies’ pre-blizzard aggression by upsizing his baits. Three-inch Rapala Jigging Raps are his favorite, but he notes that it’s essential to use light 2- or 3-pound monofilament to detect subtle bites and avoid line twist. Kloet likes to tip his Jigging Rap with a fathead-minnow head, as crappies are attracted to both the eyes and the scent it exudes. “Suspending crappies will almost always be stacked on top of each other,” he says. “Once we find them, we stay put.”

After the storm rolls in, fish are less likely to suspend in the water column and will move around with the baitfish. “Once you’re into the blizzard, they’ll be on the go,” Kloet says. He stays with the fish by drilling more holes but never ventures far from his starting point. The all-out blitz may be over, but the crappies will remain active until the storm’s end. Kloet downsizes to a Northland Mud Bug tipped with a spike during the blizzard; the smaller jig elicits more strikes when the crappies get a bit more selective.

2. Jig Slowly for Lethargic Fish During a Cold Front

The perch and walleye populations in Devils Lake are legendary, and according to Bry, when a cold front pushes in, the fish do not usually change their location. What does change, however, is their behavior. During a front, Bry begins his day by looking for perch and walleyes in the last place he caught them, regardless of what weather changes have occurred. Despite popular belief, Bry says, fish can still be very shallow during a front, holding in 6 feet of water or less. “The fish aren’t very active,” he says. “They’re not going to move far for a meal, so you have to bring the meal to them. That’s why I drill lots of holes until I find them.”

During cold fronts, it’s essential to start off with a subtle approach, Bry says. He downsizes to a jig as small as 1⁄32 ounce. A Scheels Outfitters Jig is his go-to, tipped with waxworms. And he often uses a dropper rig, which consists of a small spoon attached to his 4-pound braided main line with a No. 1 snap. Bry then connects his jig to the bottom of the spoon with 4 to 6 inches of 4-pound braid. The flashy spoon positioned in-line above the jig helps get the attention of fish, making it easier for them to find the baited jig below.

Bry says it’s common practice to frantically jig this rig to entice a bite, but not during a cold front. The sluggish fish are often turned off by a fast presentation. A lure that’s barely moving is more likely to get bit. “When I see a fish near the bait on my electronics, I slow down my jigging right away,” he says.

If you’ve put your time in working a hole slowly with a downsized jig and still can’t draw any strikes, at that point, you can also try the other extreme: coaxing a reaction strike with a larger lure and more aggressive presentation. While this is a last resort, Bry says it’s worth a try before changing locations and attacking with a small jig and a slow presentation again.

“When I’m seeing fish on my electronics and just can’t get them to eat, I’ll change over to a Rapala Jigging Rap,” Bry says. “These are larger jigs, and I’ll tip them with a spike or waxworm. I work them faster to see if I can just annoy a fish into biting.”

RELATED: Getting Wild on the Ice for Yellow Perch

More than any other tough winter condition, Moore hates high winds. “It’s my personal belief that fish respond to the noise and change in pressure created by the wind,” he says. “Sound travels faster in water than in the air, so the sound made by the wind blowing across the ice goes right to the fish.” Moore also believes the wind compresses the ice and puts more pressure in the water, similar to how high barometric pressure affects fish. During windy conditions, the fish don’t want to move.

Moore concentrates on basins that run 20 to 40 feet deep, and on windy days, he plans on drilling a lot of holes until he finds the fish, because he knows they won’t be cruising around. If he locates a school and they don’t eat right away, he’ll try them again later. Sometimes a second or third look may be all it takes to trigger a strike, and one bite can spark a chain reaction from nearby fish. If Moore can’t get any of the fish he marks to feed, he’ll wait them out. “Even on the worst day,” he says, “I know there will be a flurry of activity just before dark.”

His go-to lure on windy days is a 1⁄64-ounce Clam Epoxy Drop tipped with a chunk of earthworm, which he fishes on 4-pound copolymer line. Though an ice shelter can be cumbersome to keep moving as you look for fish, Moore says it’s a necessity. He points out that with added pressure and noise in the water, bites are going to be subtle and difficult to detect. If your line is vibrating in the wind, you’re going to miss fish, and on tough, windy days, you need to make every bite count.

High barometric pressure usually comes with a sunny, cloudless blue sky. It looks appealing, but anglers know this is the kiss of death. High pressure has the magical effect of grinding fishing to a halt, but Martins is a veteran who’s learned to overcome this hurdle. “On high-pressure days, fish can be triggered into biting, but it takes work,” he says. The fish often make tiny beds on the bottom when the pressure is high and refuse to move. “Even if you put something right on their nose, they’d more likely move away than eat it.”

Martins focuses on appealing to the fish with sound. Using a Northland Buck Shot Rattle Spoon, he’ll pound the bottom in the area where he last had action. “The fish feel that thumping with their lateral lines and they’ll come in to investigate, but it takes patience,” he says. “The ones you can attract may take 30 minutes to travel 100 yards. If you don’t see fish on your sonar or get a bite in a half hour, it’s time to move.”

On high-pressure days, Martins makes sure his line and terminal tackle are as light as possible; 3-pound fluorocarbon is key. He also rigs his Rattle Spoons below a barrel swivel a foot up the main line to prevent line twist. Martins says it’s critical to vary your jigging presentation until the fish respond. He’ll try everything from shaking his spoon quickly to letting it sit still on the bottom.

“I bring a thermos of hot tea and snack on peanuts or deer jerky.” —Mark Bry

“I prefer Gatorade to stay hydrated, and I eat protein bars and fruit.” —Doug Kloet

“Absolutely nothing I eat on the ice is cold. I always have hot tea, and I warm my sandwiches in my parka before eating.” —Mark Martins

RELATED: 10 High-Tech Tools to Change the Way You Ice Fish

Spikes are the larvae of the bluebottle fly. “I never go out on the ice without a package of spikes,” says Tim Moore. “They appeal to a variety of species, from sunfish to walleyes.” The one drawback is their size. They can be difficult to handle with cold hands, but two or three on a jig hook will up its potency big-time.

These meaty grubs, the caterpillar larvae of wax moths, are often used as pet food for reptiles. They get their name from the yellowish liquid they excrete when put on the hook. Waxworms are good for a number of species but excel at catching jumbo white perch and walleyes. They’re Mark Bry’s jig tipper of choice on Devils Lake.

A fathead minnow can be an effective bait by itself, but using just the minnow’s head on a jig is downright deadly. Most panfish attack a bait headfirst, which is why you might occasionally have reeled in a minnow with no eyes. Doug Kloet cleans up on Fox Chain crappies by spicing his jigs with the meaty morsels.

Some panfish prefer maggots over earthworms, but Tim Moore says big white perch are always partial to a chunkier piece of meat than a spike. Moore adds just enough worm to cover the tip of his jig hooks, so a single container can last him up to two weeks.