5 Ultra-Realistic Flies That Can Fool Trout (And Humans, Too) 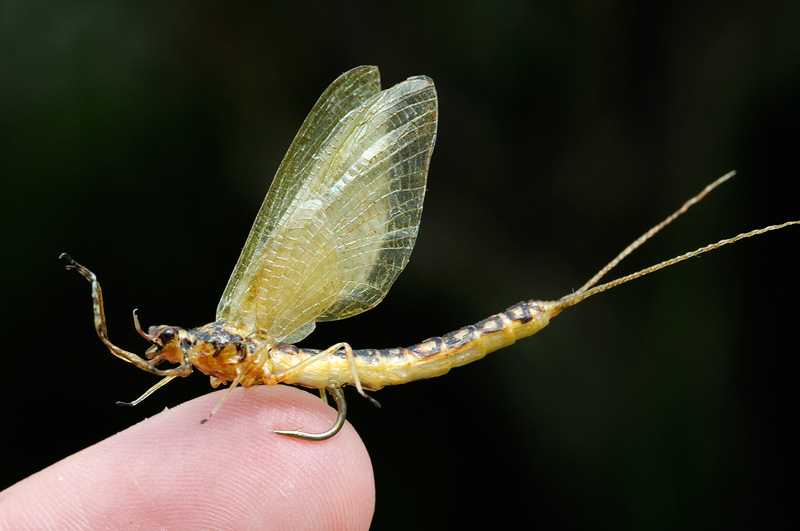 Naturally, the whole point of fly-tying is to make lures that look like the things fish eat. Proven patterns suggest insects, baitfish, amphibians, or even small reptiles. But some vise-meisters aren’t satisfied with suggesting. They use their skills to painstakingly build dead-ringer replicas of living things, often spending many hours on a single creation. Some are made only for display, while others meant to be fished. Many require imaginative use of materials, both traditional and otherwise.

How real do they look? Ask Bob Mead, whose praying mantis fly appears below. Mead ties mosquitoes that look so realistic, they were used in an ad for itch cream. Once at a fly show, he recalls, “this old-timer, he had a cane and these thick glasses on. He put the cane over his left arm, slapped the mosquito on the table, and brushed it onto the floor.” That was a $100 fly.

Here’s a small sample of some of the ingenuity and craftsmanship of fly-tiers who specialize in the ultra-realistic.

Tradd Little of Greenville, South Carolina, has been tying flies since he was 11 and tying realistic flies since he was 12—which was all of six years ago. He ties the realistics for fun and gives most of them away at fly-fishing shows; for his own fishing, he’s more likely to use standard patterns. “To tie realistic flies, it sometimes takes the nontraditional application of traditional materials,” he says. “The creative use of a simple material like ordinary fly-tying thread can result in a beautiful realistic fly.” This extraordinary fly is no doubt beautiful to another spider, but most of us wouldn’t want to find it in the shower.

Bob Mead of Glenville, New York was one of the founders of the ultra-realistic fly-tying genre. First inspired to try imitating a walking stick that climbed onto his trousers at a harness track, he became famous when this praying mantis appeared in The Art of the Trout Fly by Judith Dunham in 1988. As word of his flies got around, Mead struggled to meet the demand. “I raised the price to $200, and I got over a dozen orders. I was working for the phone company at the time, and working overtime,” he remembers. “I thought, ‘I’m gonna have to use vacation time just to tie these things.’” Along with the itch cream ad mentioned above, his flies have had roles on the TV drama Royal Pains.

Some of Fred Hannie’s frogs, bees, shrimp, and other creations are flies tied with traditional materials and methods, while others he considers fly-rod lures. But none are destined for display cases. “They’re absolutely fishable, and they’re not delicate,” the Lake Charles, Louisiana resident says. “They’re gonna hold up to being fished repeatedly.” Hannie was first inspired, and later mentored, by the late David Martin, whose lionfish fly is among the best-known examples of realistic tying. When he saw Martin’s flies in a catalog, “they just blew my mind,” Hannie says. “I thought, ‘I’ve got to learn how to do this.’ I took his techniques and went a different way, down here on the Gulf Coast.” Hannie’s book, Fly Tying with Monofilament, available in softcover and e-book, details the innovative material prep and assembly of some of his designs.

At a glance, nymphs of aquatic insects don’t look like much—crawling bugs, mostly brown. Look closely, however, and you see complex creatures with numerous distinct parts and colors. Adam Harman of Kernersville, North Carolina, was first moved to attempt realistic fly-tying by the nymphs of stoneflies, perhaps the most richly decorated of the streambed denizens. This Cyborg Crawler is a mayfly nymph, and it’s hard to imagine a hungry trout letting it go by. Harman admires the many gifted realistic tiers on social media, in particular tiers from across the pond. “They are some of the most detail-oriented, articulate tiers I’ve ever seen,” he says. “I wouldn’t want to fish one of their flies, not because it’s not fishable but because I wouldn’t want to lose it.” For his own fishing, Harman usually goes with more basic patterns. ”You just want something that imitates the profile of the fly,” he says. “It doesn’t have to be fancy. But tying realistic flies is fun, and it’s an art.”

Many realistic fly tiers are familiar with artist and photographer, Graham Owen’s remarkable artificial insects, and so are lots of movie fans, whether they realize it or not. The combination of mad tying skills and a Burbank address helped Owen parlay his hobby into a career creating prop insects for the film industry. “Flyfishing and fly-tying are what led to my midlife career change,” he says. “My friends would tease me a bit about my realistic tying, especially the amount of time consumed to make a fly. The teasing stopped when my first Hollywood gig came in; flies for Brad Pitt to hold in the movie, The Curious Case of Benjamin Button.” Owen’s butterflies and dragonflies have been incorporated in high-profile art installations, too.