Whether fish are feeding on the surface or the bottom, land trout this spring with these easy-to-tie flies 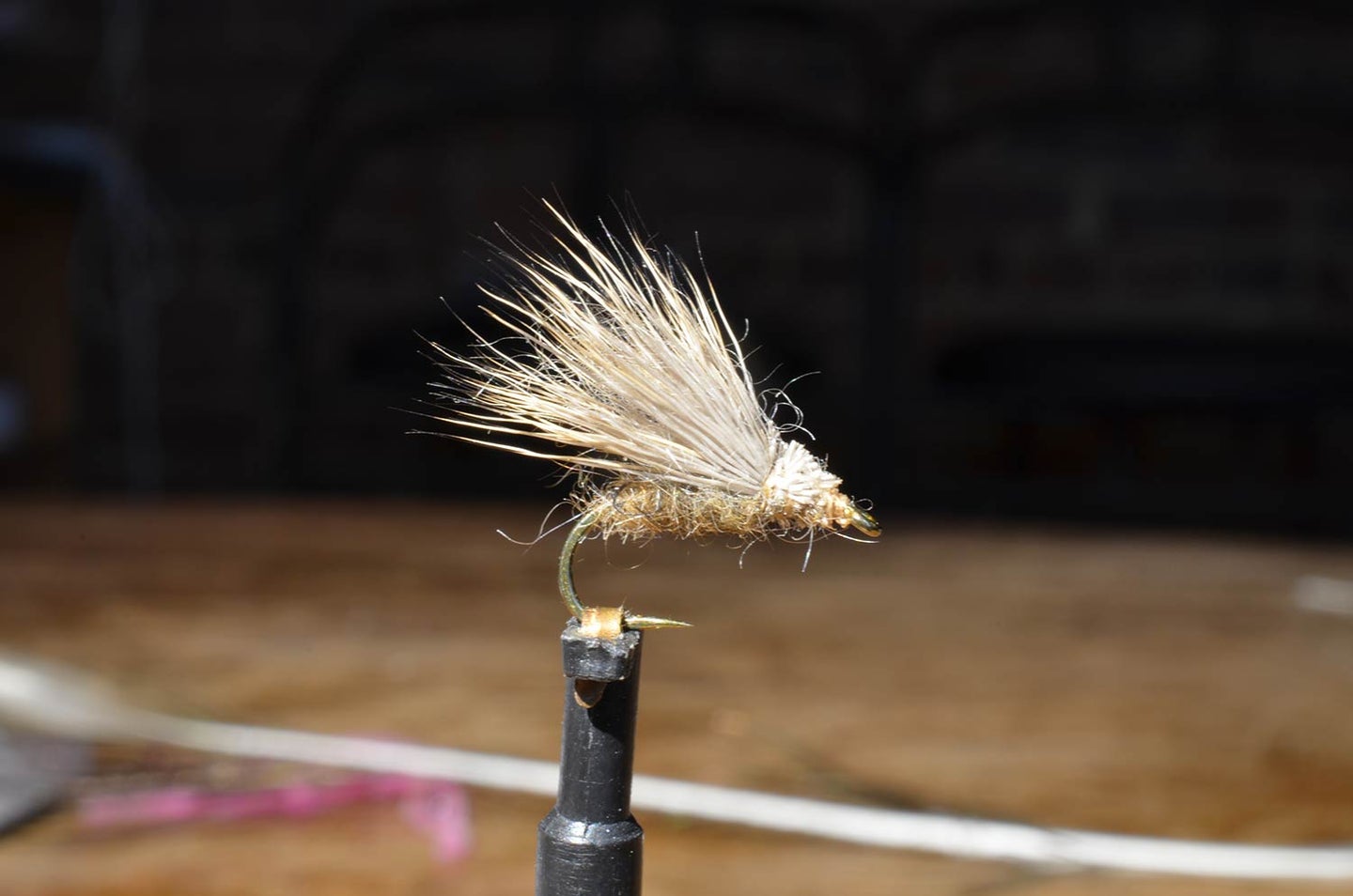 The Deer-Hair Sedge is an easy way to imitate a caddisfly. Morgan Lyle
SHARE

Early spring trout fishing can mean anything from sinking nymphs in cold, deep water to drifting dry flies to rising trout. Conditions are in flux, and the right method can change from day to day. Fortunately, a few simple flies made of readily available materials can get you in the game on most days, one way or the other. They’re not fancy, but they’re fun to tie and can be made reasonably quickly—so if your social media blows up with pictures of friends holding fish, you’ll be ready to get in on the bite.

Trout are often hunkered down deep during the early season, waiting for the water to warm and the flies to hatch. Perdigons, even small ones, drop quickly down to the trout—maybe more quickly than any other style of fly. That’s why Spanish competition fly anglers invented them and Team U.S.A. members brought them home to use on stateside trout. That great sink rate is due to the fly’s big tungsten bead head and the glassy coat of epoxy usually applied to it. The epoxy is the one thing that isn’t so simple on a Perdigon; you need the UV-cure resin and the little UV flashlight (which can be bought pretty cheaply). Some anglers tie them on jig hooks, so they ride with the hook point up, snag less, and result in solid upper-jaw hookups.

It doesn’t get much simpler than the Killer Bug. Invented by Frank Sawyer, who also invented the more famous Pheasant Tail nymph, it has no tail, no rib, no wing case, no hackle, and no head. And yet when I started fishing it 10 years ago, I caught trout like crazy. I was so impressed, I wrote a book called Simple Flies. You’ll notice there’s no thread involved in the construction of this fly. You wind the yarn onto the hook at the head the same way you would attach tying thread, then wrap to the bend, back to the head, back to the bend, and tie it off with the leftover wire. You can tie it in other colors of Spindrift yarn, and feel free to tie it with a bead to increase the sink rate and give it a bit of flash.

Here’s another fly that sinks well and catches tons of trout. Like the Perdigon, it really doesn’t look much like any living thing. However, the microfiber finger has a certain amount of lifelike movement underwater, and its oblong shape is similar to that of nymphs and grubs, albeit bigger than most. Whatever the reason, the Mop is a very effective fly that draws dirty looks from traditionalists and inspires trout to bite. Fish it dead drift through likely holes. The Mop is often tied in chartreuse or hot orange, though more subdued colors can be found.

Read Next: 10 Day-Saver Flies No Fish Can Resist

Earthworms aren’t aquatic insects, but as many of us learn at a young age, trout eat them with gusto. This silicone upgrade to the San Juan Worm is all but irresistible, wiggling in response to the slightest movement of the water. Invented by David Hise at Casters Fly Shop in Hickory, North Carolina, the Squirmy is so effective that some teams have demanded it be banned from international fly-fishing competitions. (Not the teams that used it to win, of course.) There are different ways to tie it. This is the method I learned from Devin Olsen’s Tactical Fly Fisher blog: Figure-eight the thread over the bead at mid-hook a few times; tie on the squirmy and wrap forward; throw a loop over it when you reach the bead; pull it over the bead and bind it down, then tie off at the eye.

Mayflies and caddisflies are the stars of dry-fly fishing, but if you see trout feeding at the surface in early spring, they may be eating midges. In fact, since some species of midges are designed for frigid water, trout sometimes eat them right through the winter. The Griffith’s Gnat is the best-known floating midge pattern and is usually tied in size 18 or smaller. It’s a straightforward tie: bind on the herl and the rooster feather, wind the herl up the shank, then wrap the feather forward with a little space between the wraps, a technique known as palmering. Like most of these flies, the Griffith’s Gnat doesn’t try to be a precise imitation, but rather suggests a little bug with a bunch of legs—just the ticket for a trout on a chilly afternoon.

Good-size mayflies (half-inch or bigger) will soon hatch, and trout will rise. The Haystack makes it easy to match the hatch. The deer hair wing and tail work for any species of mayfly; all you need to do is pick the right color dubbing for the body. In my home state of New York, for example, we’ll want a pinkish-tan body if we’re fishing a Hendrickson hatch, or something gray if the Quill Gordons are coming off. March Browns, Slate Drakes, Blue-Winged Olives, Pale Morning Duns, Sulfurs—all are easily imitated with this style of fly in the right size and body color. Tidy a Haystack up a little with neat split tails, and it becomes a Comparadun. Use a tail of brown Z-Lon yarn for a shuck, and it’s a Sparkle Dun. The one pictured above has a body of orange Australian opossum, purchased years ago from the late Fran Betters, who invented the Haystack at his fly shop in the Adirondacks.

Read Next: The 25 Best Lures and Flies for Spring Fishing

In the early season, you’ll probably see blue-winged olive mayflies, in sizes from small to really tiny. The Baetis flies, as most BWOs are scientifically known, hatch in good numbers and trout love them. The RS2 was developed on the hard-fished streams of Colorado’s Front Range to imitate these dainty insects. It’s considered an emerger, to be fished in the surface film or just below, yet some anglers fish it deeply with a split shot, like a nymph. Either way, this pattern does an especially good job of imitating a small, slim fly.

Sedges, more commonly called caddisflies by American anglers, are hugely important trout food. They differ from mayflies in that they don’t have tails and they tent their wings along their backs when at rest, like moths. The best-known caddis dry fly is the Elk Hair Caddis, and it’s a virtuously simple tie. I like Bob Wyatt’s Deer-Hair Sedge even better because it doesn’t even bother with a hackle. The pattern floats flush on the surface, like the Haystack, and it can even work when mayflies are hatching. Make a buggy body of hare’s mask fur (also referred to as hare’s ear), then lash on a bundle of Comparadun-style deer hair for the wing, trimming the butts to form a head.

There’s just no reason not to have a few Woolly Buggers handy when trout fishing, in the spring or any other time of year. This fly is one feeding trigger after another: a wavy tail, a segmented body, a caterpillar-like bristle of legs. Pennsylvanian, Russell Blessing’s original is pretty easy to tie; this one’s even easier. Instead of tying on a body of chenille, you just twist the stem of the marabou feather that forms the tail and wrap that forward, followed by the palmered saddle hackle. The one drawback is that the body and tail are always the same color, but the black hackle presents plenty of contrast to the olive body and tail.