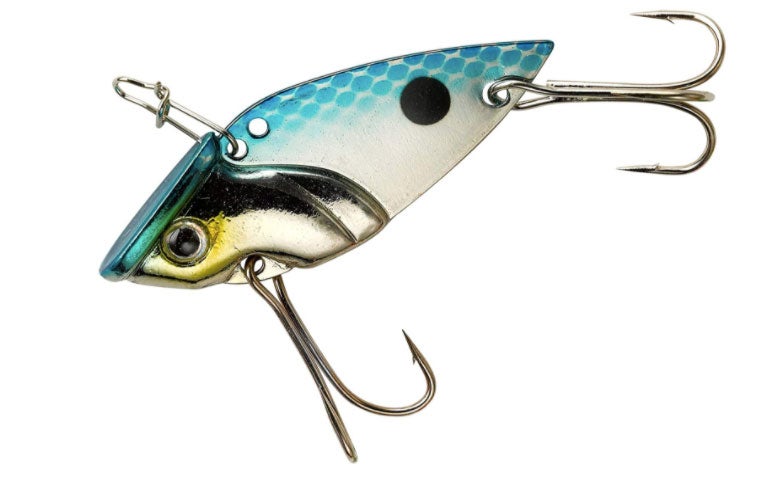 Crappie might be scrappy fighters, but they can also be a pain to pattern and a chore to figure out what they’re eating. So, we tracked down four professional crappie fishing guides to learn which lures they never leave the dock without.

Porter is an accomplished fishing writer and professional guide since 2002, and he says 50 percent of his guided trips are for crappie, during which he routinely boats fish weighing two pounds or better.

Crappie react well to flash, and a gold spinner has always been a productive standby, but I honestly don’t use them that often,” Porter says. “I’ve always found that Colorado blades have better rotation at slower speeds than other styles. I’ll cast and give a quick wrist snap just to get it turning, but once it’s going, you can slow down to the speed you need and the blade will stay in motion.”

”The Luhr Jensen Hot Shot is an odd-looking crankbait, but they have a very erratic action that makes them want to run to one side, then run back to center for a few beats, then go the other way,” Porter says. “I think the give off a different sound wave because of that action. To effectively fish crankbaits for crappie, you have to know the size of the fish you’re targeting. I use them primarily when I know there are lots of ten-plus-inchers around. Big crappie hit them no problem, but smaller fish will shy away from larger baits.”

“I developed these jigs because I wasn’t happy with what was out there,” Porter says. “The eye is offset so the jig hangs horizontally instead of tail down, which is unnatural. The marabou tail also undulates constantly, even while sitting still, which really triggers strikes. I actually don’t jig a jig at all. Instead, I find that a slow, steady retrieve is more productive. I think that might be because the jig doesn’t look nervous, therefore it’s more vulnerable because it doesn’t act like a baitfish that thinks it’s in trouble.”

”Many curly-tail grubs are molded in one piece, so the tail is stiff and takes some aggressive jigging to get it moving correctly,” Porter says. “The three strands on the Tripple Ripple have a nice wiggle even when worked super slowly. Lots of guys fish soft plastics under corks, which is effective but can also hold you back. Even when you think your depth is set just right, the lure will always find the one branch or rock sticking up higher and hang up. If you skip the float, you can adapt to quick changes in depth or structure height more efficiently, which means more time in the water.”

When anglers want the best shot at boating plenty of crappie weighing over two pounds, they book with Martin, who has guided on Kentucky Lake for a decade.

Martin opts for a 1/8-ounce Road Runner in chartreuse. Amazon

Martin opts for a 1/8-ounce Road Runner in chartreuse. Amazon

”The blade action on these lures does a good job of simulating a wounded baitfish,” Martin says. “Sometimes I’ll tip them with a tube or grub to add even more action. A tight line is key for fishing a Road Runner, because the blade spins on the fall just as well as on the retrieve, so many times the crappie will hit it as it drops over structure.”

”Any color that imitates a generic shad is a good crankbait choice,” Martin says. “I like a lure that can run shallow but dive up to 12 feet and has a good, tight wobble. Crappie tend to key in on erratic action over a steady retrieve. I instruct my clients to stop the lure frequently and change speeds often. It’s subtle changes that catch a crappie’s attention.”

“The jigs I use most often for crappie fishing are locally made, but they’re pretty standard,” Marin says. “Any plain, round head jig will work well, and I always do best with this head style. A 3/32-ounce jig is a middle-of-the-road weight that’s pretty versatile. When you’re vertical jigging over brush piles, or any structure, you want the jig to be parallel when you pause. Round head jigs stay evenly horizontal, which I think most accurately represents a real baitfish. I find that jigs that lay nose-up or down catch fewer crappie.”

”Tubes will always be a universal producer when you’re crappie fishing, and the Southern Pro Lit’l Hustler is effective all throughout the season,” Martin says. “Our water is often slightly stained, so you can never go wrong with chartreuse. When the crappie are up on the banks spawning in the spring, I remind my charters that most hits are out of egg defense rather than hunger. If you cast into spawning fish and retrieve quickly, they see the threat leave and might not chase. But if you cast and let the jig hang under a float right in the middle of them, keeping it perfectly still, they’ll get mad and attack it.”

A regular crappie hunter on Beaver Lake since 1992, Piper began guiding professionally in 2003 and now runs more than 100 trips a season to put clients on crappie that often reach 2 pounds.

”I fish the upper end of Beaver Lake, which can get really murky compared to the rest,” Piper says. “Black has a sharp silhouette and has always done well for me in dirty water. When you get out on the water and the clarity is bad, you’ve got to get something out there that has lots of vibration. Tubes and jigs will still catch fish, but they have to be right in front of their faces, whereas a spinnerbait they can find.”

“Threadfin shad are a favorite forage of our crappie,” Piper says. “Although it doesn’t seem like this color would match them, if you hold a threadfin in the sun, you’ll see twinges of green and purple. Lots of anglers will probably tell you to pause your retrieve with a Rat-L-Trap, but I don’t care for the way they fall. Dropping nose-down is not natural, so I’ll cast past the structure I want to fish and always maintain a steady retrieve over it all the way back to the boat.”

“The Arkie Jigs Shinneee Hinneee is incredibly simple but highly effective,” Piper says. “The bottom line is, crappies react to flash, and just the little bit off tinsel goes a long way. They’re absolutely my top-producing jig. This jig is a big producer because it takes hardly any action to make fish hit it. The trick is just barely flicking your wrist. It can almost be boring because it’s like dead-sticking, but the slightest twitch gets it done. If it’s windy and there are waves, I tell me clients to drop it and not do anything. The bounce of the boat is enough.”

“I’ve fished a lots of soft plastics over the years, and this is the best by far,” Piper says. “The tail is a little shorter, which helps avoid short strikes, and since it’s ribbed down the entire body length, the vibration, although slight, is a huge plus. No matter how deep the water is, I never use more than a 1/16-ounce jighead with grubs or tubes. Any bigger and they fall too fast, plus the hook size grows and may affect the number of fish you get. Rather than up head size, I’ll use split shots on the line to increase the weight, but keep the offering small.”

A Crappie U.S.A touring pro and guide on Lake Shelbyville since 1993, Welch has a widespread reputation for bringing heavy stringers back to the dock and has been guiding anglers for nearly two decades.

”There are spinners similar to the Slider, but most have curly tails and I believe the paddle tail out-fishes them three to one,” Welch says. “I also never go heavier than 1/16 ounce because the lure will drop too fast and end up under suspended crappie. People tend to attempt a 60-foot cast with a spinner when all you need to do is throw 30 feet. The worst thing you can do is throw high in the air and create a big loop between the lure and the water. When the lure splashes down, it’ll sink and end up in the brush before you get all of that slack reeled up. I’ll tell clients to only move the rod tip from 11 to 2 o’clock when they cast. A short stroke is all it takes.”

”I don’t often throw crankbaits for crappy, but I will use a Cotton Cordell Gay Blade on occasion as a search bait,” Welch says. “The vibration this lure gives off really stands out. I’ll fan-cast it in shallower water when I’m looking for crappie in the spring or if I think they’re on the move. Once I find them, I’ll switch to a move effetive method. Lures like this will, however, catch bigger fish over all.”

”Tubes are always going to produce crappie any time of year,” Welch says. “I think the trick to making them work for you is being able to adapt them to any situation. You have to know when to jig, when to let them sit under a float, and be really familiar with the depth of top spots. Chartreuse has always caught the most fish for me.”

”Tiny grubs are great because you can work them many different way,” Welch says. “Sometimes I find that a straight retrieve works best. But these particular grubs don’t require hard motion to get the tail going, which is really important.”