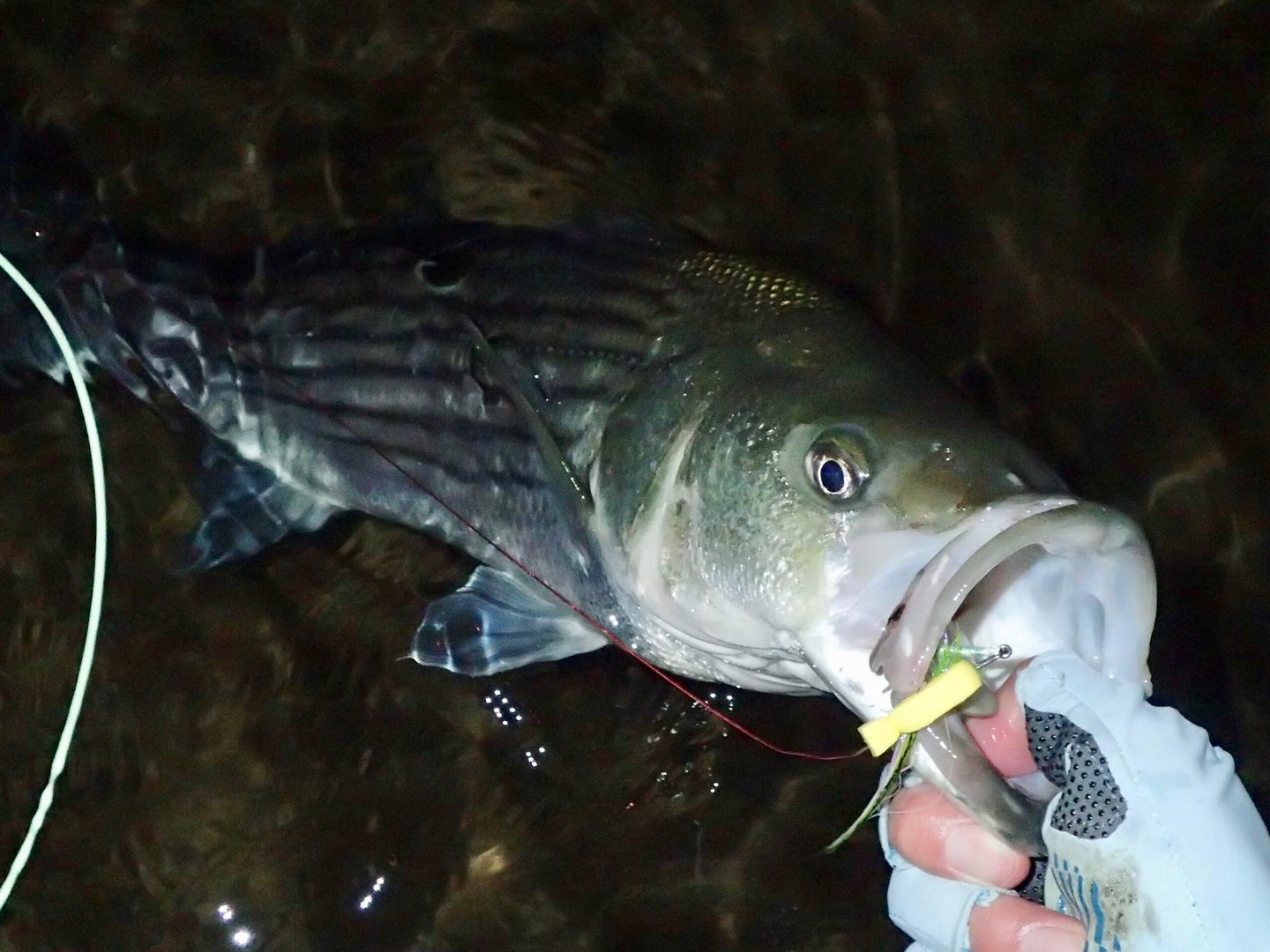 Casting distance matters in some cases, but often stripers can be caught right at your feet. Steve Culton
SHARE

I do most of my striper flyfishing alone. But this past fall I made friends with an exceptional surfcaster, and I jumped at the chance to fish with him. Since my new pal was primarily a plug angler, I knew I’d be treated to a wealth of real-time data for every mark we’d be fishing.

I’ve long held the belief that two anglers using different methods is one of the fastest ways to learn where the fish are—and what they’re willing to eat. This holds true for fly-bait, fly-plug, and even fly-fly (for example, one angler nymphing, the other fishing streamers). It’s also a tremendous opportunity for each angler to observe different styles, riff off of what the other is doing, and ultimately catch more fish. Here are a few tricks I’ve picked up from plug fishermen.

1. Casting distance makes a difference but not as much as you’d think.

When fishing with a surfcaster, a fly angler’s limits are obvious. You can’t cast as far, especially with the wind in your face. You can’t cast as much weight either. But that doesn’t mean you can’t learn from that surfcaster. If the surfcaster is tossing a plug, out-fishing you by a wide margin, and hooking up well past where you’re casting, your conclusion—and you’d be right—is that the bass are holding out of your casting range. Even if some of the fish are being caught closer in, it may be that the bass are following the plug from that distant zone. After a storm carved a new channel on my favorite striped bass river, positioning it well past single-hand fly casting range, I decided to invest in a powerful two-handed rod. It made a big difference. I don’t catch as many stripers as the pluggers, but I catch significantly more than the single-hand fly casters.

But it’s not always about distance. Dennis Zambrotta, author of Surfcasting Around The Block, notes that casting a mile is overrated. For those fly casters obsessed with distance, Zambrotta notes that stripers, “will eat in knee-deep water. There are probably more fish between you and the shore than you think. Some of the spots I fish on Block Island, the stripers are right off the beach.” That’s why, regardless of method, he advocates a cast-before-you-wade mentality.

Zambrotta also thinks fly anglers can benefit from learning the nuances of structure. He says that “some fly anglers waste a lot of time fan casting the water.” According to Zambrotta, it’s better to learn how stripers interact with structure—reefs, jetties, boulders, channels, and troughs—and then attack those areas with precision casts. “When fish relate tight to hard structure that’s always there, learning where those fish are, and presenting your fly into those alleys will make a big difference.”

2. Bring spinning gear, and use it to find fish.

Dan Wells, another hard-core striper angler, uses both spinning and fly gear to pursue linesiders. In fact, Wells considers spinning gear to be an essential part of his fly fishing success. Wells says that he tends to fish either the surface or near the bottom when he’s searching for bass. “I like using spin gear to find stripers because I can throw a surface lure or a jig,” he says. “I’m trying to find actively feeding fish by covering water with a surface presentation, or trying to hit deep structure to see if there are fish staged there.” Wells doesn’t go heavier than one ounce for his searching bucktails, because if he finds stripers, it’s hard to replicate more weight than that with a fly rod.

3. Put some scent on your flies.

Most anglers are aware of the powerful attraction scent has for fish. It’s one reason why fishing with eels or bait chunks is such a productive method for catching big bass. Wells has taken the essence of bait angling and incorporated it into his fly fishing. “Most fly anglers will say I’m a heretic. But if you’re fishing at night and you put some eel scent on your eel fly, you’re going to catch a lot more stripers, especially if you’re using larger flies.” According to Wells, “scent is very important at night.” He’s tested scent on his eel flies, green crab flies, and herring flies extensively. Wells estimates the hookup improvement ratio is 7:1. He uses “just a tiny dab of scented gel.”

Jerry Audet, one of southern New England’s best surfcasters, is no stranger to the long pole. His first bit of advice for fly casters is, as he puts it, going to ruffle a few feathers. “You’re making your flies way too complicated,” he says. “Stripers are dumb, especially at night.” Audet also thinks fly anglers could benefit by not slaving over leader formulas. “You don’t need tapered leaders and you don’t need fluorocarbon.” Audet says he sometimes uses a straight shot of 50-pound mono when he’s fly fishing a boulder field and has no trouble getting bass to eat his flies.

5. Pluggers: When it comes to bait presentation, less is more.

Going to school on other fishing methods works both ways. Audet says, “One thing I think plug anglers can learn from fly anglers is to do nothing. A lot of surfcasters want their plug to make a lot of commotion.” But much of the time, the bait is doing almost nothing. “Baitfish are trying to hide or trying not to waste calories that they’ll need to flee from a predator. Some fly casters are really good at letting the water do the presentation work.” Good bucktailers, he notes, do an excellent job of letting current deliver the lure to the fish.

Read Next: Why Making a Tide Calendar for Striper Fishing Will Help You Land More Bass

6. Find the right place to land your fish.

Audet is also aware that flyrodders are landing fish on tackle that has a fraction of the lifting power of a standard surfcasting rod. Certainly landing a large bass on a fly rod is part skill, part planning. Audet says planning how his fights will go has resulted in fewer big bass lost in tricky areas like boulder fields. Figure out how you’re going to fight a fish, and, just as critical, where you’re going to land it, and you’ll bring in more stripers on a fly rod.