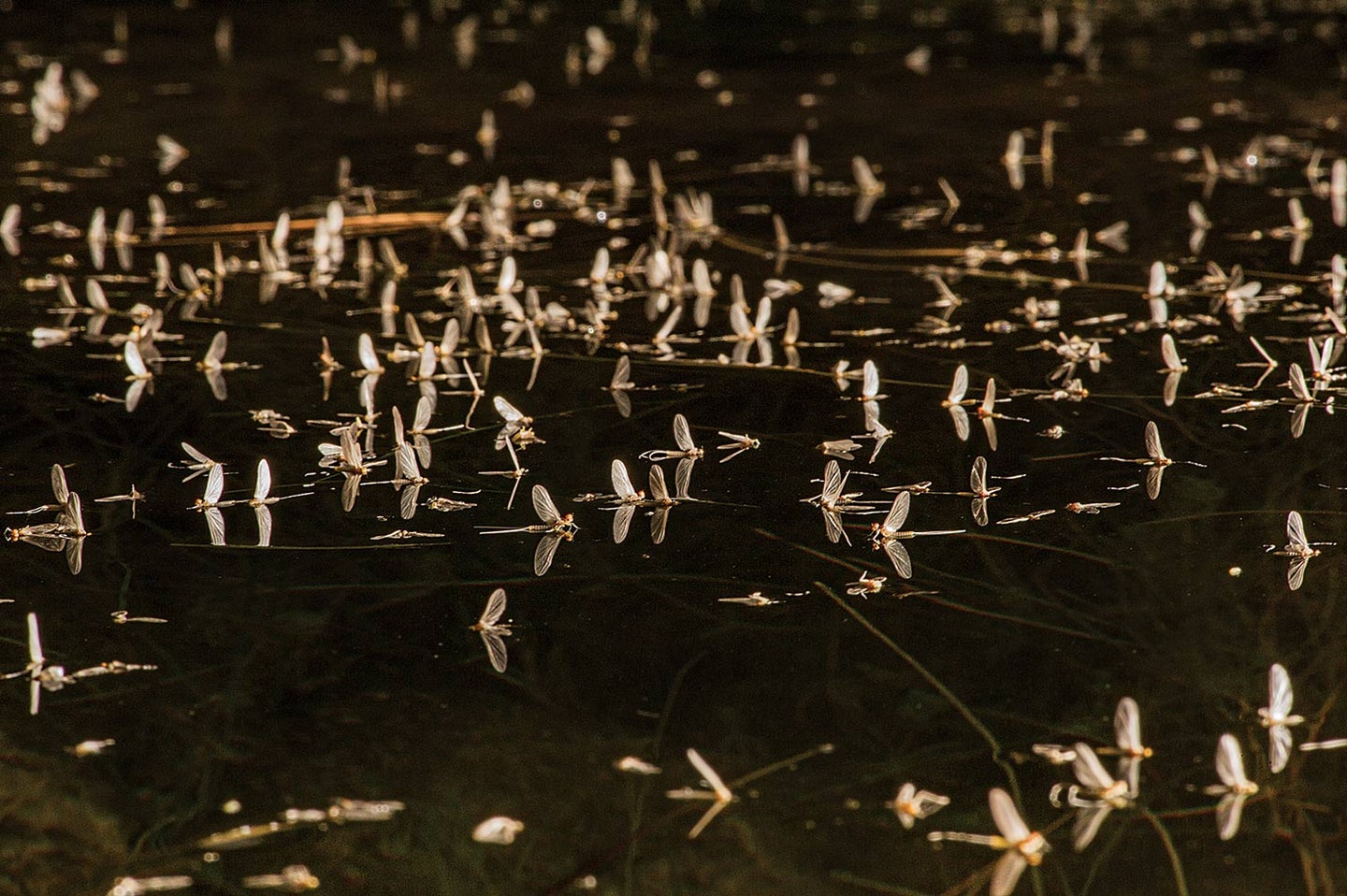 Down the steep bank and through dog-hair stands of invasive knotweed, the river opens up to a huge slow pool below and a riffle above. There are already a few bugs wafting by on the slight breeze, and I see two splashy rises in the tailout. But I head for the riffle, straight to a certain boulder, where I sit, waiting.

I think of this as John’s rock. He would sit here for hours and watch the river go by. It used to drive me crazy. We were buddies, but being 25 years my senior and Field & Stream’s legendary fishing editor, John Merwin was also enough of a mentor that I felt I couldn’t start fishing until he did. So, I’d sit next to him on this big, flat rock and wait.

Usually, after taking in our surroundings and considering things long enough, John would impart some little piece of wisdom. But only ever a piece. He’d lift his head, tracing the ascent of a mayfly through long shafts of sunlight and up past the tops of the trees, where the bug would disappear—and then he’d hint at what he was thinking. He might explain just enough to make me forget for a second that I’d rather be fishing, enough to make me ask what he was getting at.

Then he’d laugh his snuffling laugh, and say, “Oh…I’ll tell you when you’re older.”

This used to drive me a little crazy too.

I’ll never forget the first time he took me here. He drove his truck along the railroad bed so close to the tracks that I clutched the door handle, ready to bail if a train came. We scrambled down to the river and stood on the bank, scanning the tailout and then the broad riffle. On the far side, the skinny water gathered and poured into a chute that cut the bank of a towering cliff decked with leaning hemlocks.

We waded out and sat on his rock. And I waited.

Soon size 18 bluewing olives started to climb and disappear. Even as a few trout began to rise, we sat while he talked about the ephemeral nature of mayflies. John was steeped in angling literature, could quote poems and passages from memory. He knew that the transience of Ephemeroptera was a bit of a literary cliché—how the moments in our lives, and the people too, are like these gauzy bugs passing through the sun. But it was a lovely cliché, and one worth pondering on a windless day while watching a hatch of mayflies.

I nodded as he went on but didn’t pay much attention. I was 25. I wanted to get fishing.

“Oh well,” he said with a laugh, clutching my shoulder and standing up. “I’ll tell you when you’re older. Now it’s time to fish.”

Something on the water had changed, something he’d apparently been watching for. The distinct, intermittent rises I’d wanted to chase were gone. Now the river’s surface seemed to be pulsating as swaths of disturbed water appeared and spread over the film. We waded closer, and I finally realized what I was seeing—pods of huge porpoising trout, a dozen or more fish in each, but moving like a single entity, roaming and shape-­shifting.

I cast and caught my first-ever 20-inch rainbow. John laughed, taking it in. He still hadn’t started fishing. “Better soak it up,” he said and then turned to wade downstream. Before long, one pod of feeding rainbows melded into another, until the entire pool was blanketed and swarming with the backs of trout—a field of heads and tails and dorsal fins in continuous motion. I could close my eyes and cast.

I was so busy catching fish on olive spinners that I didn’t look up until there was only a narrow band of half-light over the tailout below. And in the middle of it was John, silhouetted, up to his armpits, fighting a huge somersaulting rainbow.

Years later, John had some serious health issues but seemed to recover. We fished together several times afterward, although he did a lot less fishing and a lot more sitting and mulling things over. I’m sure I complained, but he never did. We fished here again too. We sat on his rock together, and I waited while he talked about mayflies.

Then one day his wife called me, and the second I heard her voice I knew he was gone.

So here I sit this evening, waiting, and hoping just a little that those splashy rises downstream might morph and spread. I’m 50 years old now, and as much as it surprises me, I’m mostly content to just watch the river go by and to trace the flights of mayflies. It’s getting late in the evening, and spinners are beginning to dance over the riffle. These bugs are so delicate, so nearly transparent, that I can only see them when they climb into a shaft of sunlight, bright against the wall of hemlocks. They pass through the light, and the light passes through them. Like they are hardly there. And in a little while, they won’t be. It makes me think of a line John used to recite from a poem about mayflies, whenever he’d eye their spent bodies littered on the film.

“An hour of gossamer life…,” he would say.

It occurs to me now that the last time he said those words, he probably knew that the end was near for him, and he never did tell me. It would be just like him to let me figure it out later.

Everything is gone in a flash. That first time we fished here together, that incredible evening, was only a flicker of light. And the 18 years I had with John seem to have vanished just as quickly. What drives me crazy now, as I sit here, is the thought that I might have squandered any of it wishing I was fishing.

It was one of the many things he couldn’t make me understand when I was 25. That whatever is here, now, you better soak it up.

I’ll never see a night of fishing like that again, no matter how many times I come back. And I’ll never see John again. But when I wade out and sit on his rock—waiting, and getting older—once in a while, he finally tells me something.