Be good, gobbler nuts, because Santa is watching and there’s stuff on this list you really need 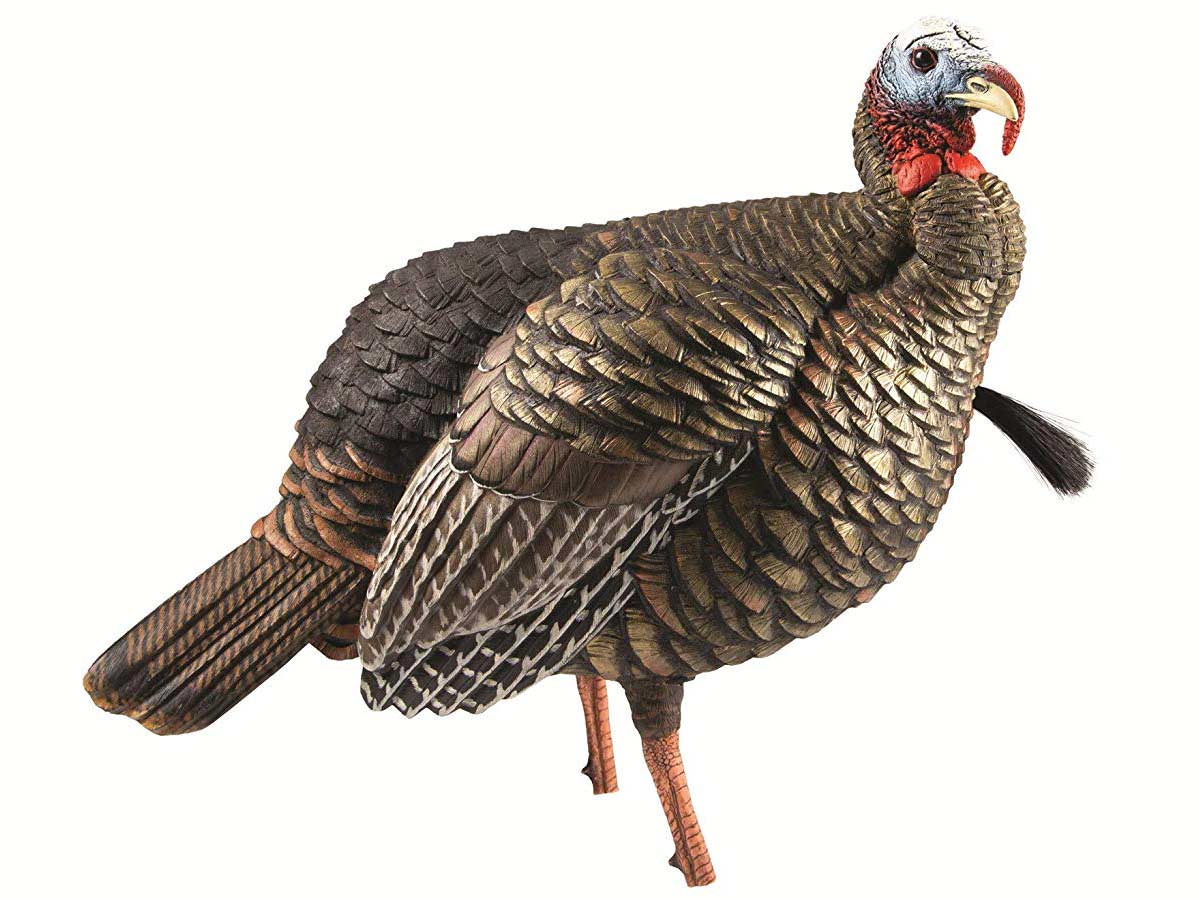 There’s still plenty of cold months ahead, but before Seasonal Affective Disorder sets in, consider this: The first spring turkey seasons of 2021 will open in about 100 days. That’s reason enough to pour yourself a whiskey and eggnog (or maybe just a whiskey, since eggnog is gross) and do a little yelping around the Christmas tree. With any luck, you’ll find some of these goodies wrapped up and waiting for you underneath. I’ve personally used and vouch for everything on this list.

Do you need a custom call to yelp up a gobbler? Nope. I do 95 percent of my turkey calling with a mouth call that gets thrown away at the end of May. But for the turkey hunter who doesn’t necessarily need anything anyway, there’s probably not a better gift.

Bob Fulcher, owner of Shadetree Callers, is an NWTF Grand National Champion call maker and a hell of a good guy. What you get by investing in one of his custom calls is a hand-turned-and-tuned work of art that’ll make the finest turkey music you’ve ever heard. I have several of Fulcher’s box calls but my favorite is one he actually made for my son, Anse. It’s a small “Shirt Pocket Box Call” made of black limba and bloodwood that sounds, well, just like a hen turkey. You can commission the call you want, made of other woods if you’d prefer. Fulcher makes his calls one at a time, and they’re worth the wait and the price.

This simple leather strap is one of my single-favorite pieces of turkey hunting gear. You could unfurl and use it to lash your buddy because he swatted a mosquito and scared away that silent strutter—but really, this thing is at its best for packing gobblers out of the woods. Simply double both ends of it under the spurs and haul him out. Or double one end around the spurs and the other around the wattles, cradle-style. Both work, and I promise, after someone packs a bird out with it, they won’t be caught without it.

There’s a perception that double-reed mouth calls are just for beginners. While it’s probably easier to make a basic turkey yelp on a double-reed than on any other cut, veteran callers know a good double-reed is capable of a wide range of sounds. It’s my favorite cut for working a bird off the limb, since it’s capable of soft tree yelps and clucks, but also perfect for higher-pitched, assembly-style yelps and “kee-kees”—sounds springtime birds don’t often hear from hunters. The Z-Yelper is one of the best off-the-shelf double-reeds you can get, and it makes a fine stocking stuffer.

The Grand Slam Subspecies of the North American Wild Turkey

Ryan Kirby’s art is probably familiar to longtime readers of both Field & Stream and Outdoor Life, as he’s created many of our illustrations. He handles the artwork for brands like Winchester ammunition, too. But don’t let all that talent fool you. Kirby is a genuine North Carolina redneck who probably turkey hunts more than you, and so when you see his work you think to yourself, “That guy knows what a turkey looks like.”

This print, depicting the Eastern, Osceola, Rio Grande, and Merriam’s subspecies, is one of several in a series that blends cool art with natural history. We have it on display in our lodge, and I find myself stopping to look at it all the time.

We used these blinds all deer season, including while outfitting hunters, and they’re one of the best deals going in ground blinds right now. They’re roomy, the fabric is a little heavier than the competition, making the blind more durable, and the windows have a silent hook-and-latch system that allows you to make adjustments without Velcro or noisy zippers. That’d be perfect at about 10 a.m., when you’re awakened from your nap by sounds of a gobbler flogging your decoy.

Ten-dollar-a-pop Tungsten shotgun shells are commonplace in today’s turkey woods, and worth every penny if you’re packing a lightweight sub-gauge shotgun (I still shoot lead through my 12-gauge). Browning’s TSS Tungsten Turkey is one of my favorite options. I’ve used the 7&9 Duplex load out of my 20-gauge on multiple gobblers, and it knocks them dead and still. No higher praise can be given to a turkey load.

Michelle and I could almost timeline our 15 years of marriage by the vacuum sealers we’ve scorched. They always seem like a great idea when we buy them, but then the reality of our yearly critter processing volume takes its toll, and it’s back to butcher paper and freezer tape for us. This one, at least, is still going strong after a year’s time—and overall, it just seems to be a little better than the comparable ones we’ve used. I got it before turkey season last year, and every package of turkey breast I’ve thawed since has been fresh and ready for a skillet of hot grease. Not that I’d cook it any other way.

MEAT! is a direct-to-consumer brand, and they have an entire line of processing equipment including these sealers, as well as grinders, dehydrators, and slicers. I’ve never talked to anyone who’s used their stuff and had something negative to say about it.

A joke that gets me laughing every time is the famous phrase uttered by funny man Billy Connolly, “Before you judge a man, walk a mile in his shoes. After that, who cares? You’re a mile away and you’ve got his shoes!” That’s exactly what I did this last year when a friend sent me a pair of Lacrosse Lodestar boots. I wore them bear hunting, on early-morning summer hikes with my boys, and through elk season, and they continue to impress. The thing I notice most is how lightweight they feel. I traditionally wear full leather boots, so to have something less dense on my heels made hiking up and downhill during elk archery season less exhausting. They’re also waterproof and have an exceptionally sticky tread design on the sole (I later learned Lacrosse worked with Vibram to create a unique and proprietary outsole). If you know someone that’s a stickler for durable but comfortable hunting footwear, the Lodestar gives it up in spades without breaking the bank.

If you know someone who prefers to hunt turkeys alone, there’s no need for them to carry big, portable blind into the field—just half of one. The Primos Double Bull Stakeout blind is essentially a V-shaped curtain with no roof that conceals a hunter for a full 180-degrees, which is perfect for setups against vegetation or a tree. There are three triangular shooting windows, it’s 59-inches wide and 37-inches tall, and it weighs only 4 ½ pounds. However, the best part is the upper half is made of SurroundView mesh, a one-way screen that lets hunters see out, but animals can’t see in. It’s a great gift for anyone getting into turkey hunting, or someone that enjoys moving around to several setups throughout the morning.

Earlier this year, Leupold announced the addition of a new scope to its VX-Freedom lineup, the VX-Freedom Red Dot Sight (RDS), and the timing couldn’t be better. Red dot sights are slowly but surely earning a solid reputation from turkey hunters everywhere because it’s easy to see the precise aiming point in any conditions. The RDS has scratch-resistant lenses and Leupold’s Twilight Red Dot System, which is designed to offer a crisp picture in different lighting scenarios. The sealed tube prevents any fogging and there are MOA adjustments for both elevation and wind. Weighing in at just seven ounces, it’s a lightweight tool someone might not even be able to tell is on their shotgun. There is a battery-saving sensor that turns the device off after five minutes of inactivity, it’s waterproof and shockproof, and a terrific gift for any turkey hunter that didn’t fill a tag because of a missed shot.

Any turkey hunter worth their salt knows the value of a realistic decoy setup, and there are many makes and models available that have fooled birds for years. However, Avian-X recently introduced what might be their most realistic deke ever—the HDR Jake. Avian says HDR stands for heavy-duty realism, which is why this decoy stands out. It’s painted with amazing details and lifelike features that anyone could easily mistake for the real thing. Each blow-molded decoy even comes with two interchangeable heads for submissive or aggressive poses. If you really want to prank the turkey hunter in your family, put an HDR under their bedsheets Godfather style and wait for their alarm to go off Christmas morning.

There are some people that just can’t dance, some people that can’t sing (even in the shower), and some people that can’t cluck, cut, and yelp like a turkey. Sadly, little can be done to help folks in the first two categories, but if you know someone that likely falls in the third, don’t worry, there’s help. Primos, which for decades has made calling easy, created the Foggy Bottom Snuff Tube turkey call specifically for gobbler hunters that can’t sing a turkey siren song at daybreak. Using a molded reed similar to the reeds used on other easy-to-use Primos calls, anyone can learn to sound like just another hen in the flock in no time. If you’re looking for a suitable stocking stuffer for a tone-deaf turkey junkie, this is it.

Dave Smith Decoys has been making a name for themselves the last few years as producers of some of the most lifelike decoys on the market. With so much work and detail going into each product, the decoys aren’t always the cheapest available, but once you own one of DSD’s true-to-life replicas, you’ll likely never need any other decoy ever again. The Mating Motion Jake Decoy includes all the realistic details DSD puts into all its products, but it also employs a hand-operated motion system, which really makes this decoy come to life in the field (especially if you use it in conjunction with a mating hen). Lightweight and easy to transport, the jake has iridescent features and reflections like real turkey feathers, and because the molds are made from a self-healing material, you don’t need to worry about accidentally peppering it with shot.