This year’s hottest new centerfire loads are designed to meet specific purposes, from long-range shooting to shotgun and handgun hunting 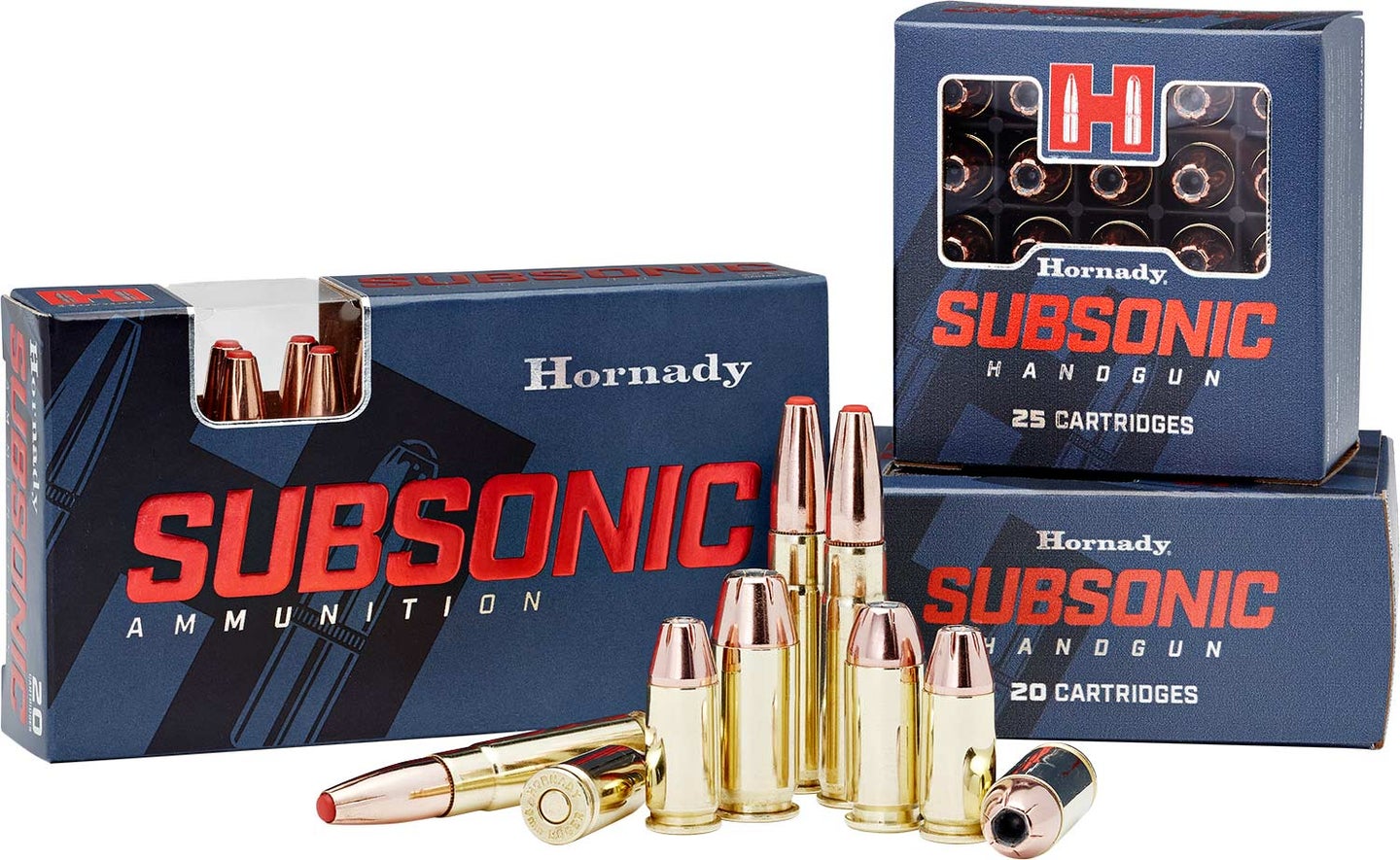 If you had just one word to describe the new centerfire ammunition for 2020, “specialized” would do nicely. Ammunition manufacturers are now making purpose-made munitions the way handloaders do in their basements—except you can buy these over the counter. Loads designed for long-distance hunting and for short-range work with handguns, shotguns, and lever-guns are just a few of the specialized options. We are also seeing a new type of ammunition that is capable of handling pressures more than 20 percent higher than what we’ve been shooting. Yeah, there are some cool new guns for 2020, but the real news—the real ingenuity—is in the ammunition arena.

Federal’s new Terminal Ascent loads use a bonded bullet to penetrate deep on close targets and a polymer tip to initiate expansion at velocities 200 fps slower than comparable designs at extended distances. The new bullet has a variety of new and advanced features including a SlipStream Polymer Tip, external jacket skiving, bonded construction, nickel plating, Accuchannel grooving, and a solid shank. What that all means is that the new bullet delivers enhanced terminal performance far and near, while also shooting extremely flat and accurately. In short, a better big-game bullet. The new Terminal Ascent loads will initially be available for the 6.5 Creedmoor, 6.5 PRC, .270 Winchester, .270 WSM, .280 Ackley Improved, 28 Nosler, 7mm Remington Magnum, .308 Winchester, .30-06 Springfield, .300 Winchester Magnum, and .300 Winchester Short Magnum. $42.95 to $53.95; federalpremium.com

A new wave of handgun hunters aren’t limiting themselves to traditional big-bore revolver cartridges anymore. Recognizing this, Hornady is now offering a line of ammo specifically for handgun hunters, regardless of whether they shoot a revolver or semi-auto. Handgun Hunter rounds are topped with a new super-tough, copper-alloy Mono-Flex bullet designed for better penetration and 95 percent weight retention. An elastomer material added to the bullet’s open cavity also aids in quick expansion across a range of velocities. Offerings for 2020 will include loads for the 9mm+P, .40 S&W, 10mm, .357 Magnum, .44 Magnum, .454 Casull, and .460 S&W Magnum. Starts at about $32 per 20; hornady.com

Sig Sauer’s new Elite Hunter Tipped line is designed to offer massive expansion and deep penetration. The ammunition features a lead-alloy bullet with an enhanced boat tail design for superior flight characteristics. The exclusive design of the concentric, blackened jacket ensures reliable, controlled expansion with maximum weight retention. And the translucent yellow tip, for which the load is named, increases the ballistic coefficient for flatter trajectories. Elite Hunter Tipped ammo will initially be available for the .243, .270, .308 Winchester, 6mm and 6.5mm Creedmoor, .260 Remington, .30-06 Springfield, and .300 Winchester Magnum. Starts at $37 per 20; sigsauer.com

A new addition to the Barnes VOR-TX line of ammunition are the Expander Tipped sabot-slug shotshells in 20 and 12-gauge. In a nutshell, they are controlled-expansion bullets for your shotgun, designed to deliver high muzzle velocities and flat trajectories, yet open up at comparatively low impact velocities to flatten game. Both 2¾- and 3-inch loads are available for anyone wanting to hard-whack anything from whitetail deer in shotgun only states to black bears and feral hogs anywhere they may be found. $15.13-$17.38 per 5; barnesbullets.com

Browning is now offering two new loads for the popular 350 Legend cartridge introduced by Winchester last year. Ideal for use in states that allow straight-wall cartridges for deer, the 350 Legend is also becoming popular for any hunters who want light recoil in a big-game round. The new 124-grain, full-metal-jacket load will be ideal for range time and practice, and the 155-grain load in the BXR Rapid Expansion Deer line should be perfect for deer and antelope. $9-$11 per box for FMJ, $20-$25 for BXR : browningammo.com

In celebration of their 150th anniversary, Marlin is offering a one-year limited-edition production run of ammunition specifically designed for the lever action rifles that have made Marlin one of the most iconic manufactures of lever guns in the world. This is the first time the Marlin brand has appeared on a box of ammunition, and may well be the last, so get them while you can. For 2020 only, the offerings will include .30-30 Winchester, .35 Remington, 444 Marlin, .45-70 Government, and even .22LR. Prices start at $13.87 for a box of 5 rounds of 22 LR and extend to $50 for 20 rounds of .444 Marlin ; marlinfirearms.com

For outdoorsmen who like to hunt in silence—or at least near-silence—Hornady has a new line of subsonic ammunition that has been engineered specifically to deliver fantastic terminal performance and low noise even without a suppressor. Loaded with either Sub-X or XTP bullets, these loads leave the muzzle quietly at sub-sonic velocities. Offerings include loads for the 9mm, .40 S&W, and .45 Auto, but maybe more exciting for hunters are the subsonic loads for the .30-30 Winchester, .450 Bushmaster, and even .45-70 Government. Prices start at $26.00 per box; hornady.com

To go with their revolutionary new rifle—the Cross—Sig Sauer has designed a new centerfire rifle cartridge. According to Sig Sauer, the new round will push a push a 140-grain .277/6.8mm bullet to 3000 fps from a 16-inch barrel. This is possible because of the unique two-piece case design, which utilizes a stainless-steel base and brass body. The case head is the same size as a 6.5 Creedmoor or .308 Winchester cartridge, and the overall cartridge length is similar as well. But its stainless-steel construction allows for maximum average chamber pressures of up to 80,000 psi. That’s 15,000 more psi than the very popular .270 Winchester, which requires a long action. It will be offered in Sig’s Elite Match Grade and Elite Hunter Tipped ammo. Price not yet available; sigsauer.com

Let me guess: You love your lever guns but you don’t love how a lots of standard ammo feeds and cycles through them. For 2020, Federal worked with Henry Repeating Arms to solve that problem and create the slickest-cycling lever load ever by tweaking the geometry of cartridge case and bullet for flawless performance. The result is Federal’s new Hammer Down ammo, topped with a controlled-expansion bonded bullet designed for optimal results at lever-gun velocities. Bottom line: it’s a better load for levers, and if you are as crazy about your lever-guns as I am, you’ll want to feed it right. Available in the usual suspects, from .30/30 up to .45-70. Starts at $20 per 20; federalpremium.com

Winchester is offering a new load for the (what else?) 6.5 Creedmoor in their Deer Season Copper Impact line. The uniquely large polymer tip of this load’s copper-solid bullet creates a larger impact diameter, creating immediate massive expansion for larger wound cavities and quicker kills. Combined with the penetration that can be expected from a monolithic, high-weight-retention bullet, Copper Impact promises excellent performance for deer-size game. In addition to the 6.5 Creedmoor load, Winchester has also added loads for the .270 Win and .300 WSM, as well as 20- and 12-gauge. Price $24-$28 per 20; winchester.com