With new ammo, chassis, triggers, and optics, there’s never been a better time to update your rimfire rifle 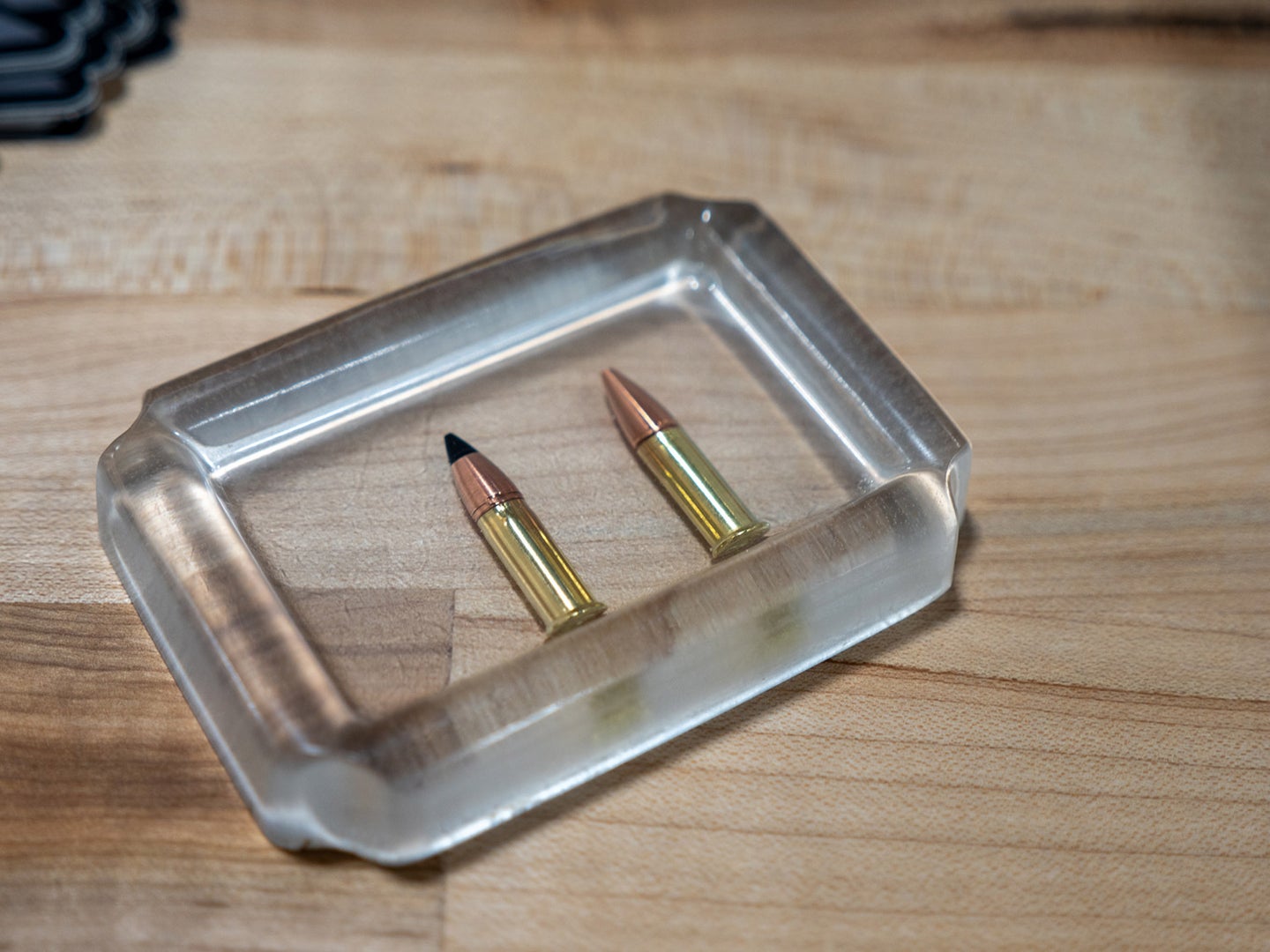 These new all copper projectiles from Cutting Edge Bullets aren't available yet. But if an ammo manufacturer decides to load them, they could make for some impressive groups downrange. Cutting Edge
SHARE

Make no mistake: The year of rimfire is upon us. Some of the best new rifles of the SHOT Show were chambered in .22 LR or .17 HMR, and some of the coolest new shooting and hunting accessories are rimfire specific, too. Nearly every name-brand chassis maker is now in-letting for small-bores, and a pair of highly respected AR-15 trigger builders are turning their attention to 10/22s. Throw in new ammo, barrels, and optics, and it’s a good time to be a rimfire shooter.

This is a rebranding year for the undisputed leader of American-made rimfire ammunition. CCI relaunched some of their best ammo lines in celebrity packaging, like uber-velocity Stingers dubbed “Stangers,” a play on 22Plinkster’s southern drawl, replete with his pretty mug on the box. CCI did, however, quietly launch two brand new loads as well, both in the CLEAN-22 lineup. The first is a suppressor-ready 45-grain .22 LR running 1,000 fps. The polymer wrapped lead pills reduce fouling by as much as 50 percent. Ask anyone with a can who runs them, and they’ll tell you the difference they make. This year CCI also released a CLEAN .22 WMR hunting load—a 46 grain segmented hollow point wrapped in a polymer skin. They say the coating means the bullet will separate at lower velocities and longer distances. I plan to find out what the foxes around here have to say about it. $23 for 200 and $18 for 50; cci-ammunition.com

Lone Star State trigger builder CMC is getting into the 10/22 game. It’s a first for the company that made its name with super-crisp AR-15 and AR-10 drop-ins. This new Ruger 10/22 trigger is based on CMC’s 3-½-pound AR single stage, and is scaled down with an optional flat, curved, or combat curved kill switch. It ships with push-button bolt hold open, an auto-bolt drop catch, and a captured ejector—with a few different paddle options for the mag release coming soon. That’s a lot of features wrapped around what will surely be a crystal clean break. $250; cmctriggers.com

Talking with competition shooters, firearm engineers, and assorted rimfire maniacs, they all asked me the same question: “Did you see the copper solids yet?” Pennsylvania precision machine shop Cutting Edge Bullets turns long-range projectiles on CNC Swiss-style lathes, and late last year they developed a prototype copper solid for .22 LR. On the show floor, they told me they’re still working out kinks, and the weights will range from 25 to 45 grains. They had a solid and ballistic-tipped hollow point in a glass display, but said the first run will be solids only, which they hope to complete by April. Then, it will require an ammo manufacturer like CCI, Federal, Remington, or Winchester, to pick up and load these bullets. So, they’re a long way off, but if these new .22 LRs get made, it’ll surely change the precision rimfire game. cuttingedgebullets.com

Not that you’d know it by watching the U.S. broadcast, but there are 15 shooting events in the Summer Olympics, and ELEY has won more medals than every other ammo manufacturer combined. This year, they’ve launched a new .22 LR line aimed not at gold medals, but the peculiar sport of Auto Benchrest, where shooters try to punch twenty 1/8-inch bullseyes in 15 minutes with a semi-auto—typically a highly refined 10/22. ELEY’s new Semi-Auto Benchrest Precision is a 40-grain round nose running 1,030 fps with a paraffin-based lubricant. There’s a less expensive Outlaw version, too—with a 42-grain round nose at 1,040 fps—intended for practice. You don’t need to be an Auto Benchrest Association shooter to love this new load. Knowing ELEY, they’ll surely work great in any rifle where accuracy matters most. eleyammunition.com

Binary triggers, of which Franklin makes several for AR platforms, fire a round when the trigger is squeezed, then fire again when the trigger is released. The two-for-one mechanics makes dumping ammo downrange fast, and fun. As you can see in this video from Franklin, the effect is something close to full auto. The selector goes three ways: safe, semi-auto, and binary. It will work with any 10/22 receiver, bolt, and barrel. $300; franklinarmory.com

With Nikon leaving the riflescope market—and taking with them a popular lineup of .22 LR BDC tubes—Fort Wayne, Indiana-based Hawke Optics is doubling down on rimfire. This year at SHOT, they released a new 30mm tube with a 50mm bell, in long-range friendly 4-to-16 power. The side-focused parallax adjustment runs from 10 yards to infinity and the exposed ¼ MOA locking turrets have the nice, positive “click,” of a well-made scope. But what really sets these new eyepieces apart are the two new BDC reticles set for .17 HMR and subsonic .22 LR. The .22 reticle was designed for 1,050 fps ammo, unlike most others on the market which are set for 1,600 fps CCI Stingers. Zero the rifle and Hawke .22 LR scope at 50 yards, and at 16x hashmarks in the scope show where to hold to 200 yards in 25-yard increments. The .17 reticle was pre-calculated to 2,500 fps ammo, and shows hold points to 300 yards in 50-yard increments when zeroed at 100 yards. I know what scope is going on my next squirrel rifle. $399; us.hawkeoptics.com

Eagle, Idaho-based KRG was formed in 2005 by a group of active-duty Army SF soldiers looking to improve their issued kit. They’ve gone on to design numerous small arms accessories, but are perhaps best known for their precision rifle chassis lineup. Last year, they caught fire in the rimfire world when they inletted their very excellent Bravo chassis for the hair-splitting accurate Tikka T1x .22 LR. (I tried to buy a Bravo T1x. They were back-ordered for months.) This year KRG hopes to catch fire again with a Bravo chassis for the Ruger 10/22. The backbone of this design is a full-length aluminum bedding rail that runs from the action to the tip of the forend. In the Bravo 10/22, the rail is designed to float a .920 bull or sporter contour Ruger barrel. The chassis material itself is polymer, much like a Magpul stock, which makes for a lighter overall package than full aluminum or fiberglass. The Bravo 10/22 has a shortened 11-inch length of pull for youth shooters, but the bevy of KRG chassis accessories like the tool-less adjustable butt pad and comb riser will work, along with ARCA rails, barricade stops, and everything else you may want for a match shooter. Plus it’s inletted with a mounting point for a KIDD rear tang. With a price of $250—less than half the cost of some other 10/22 chassis listed below—it’s bound to be a hit among the roll-your-own-rifle crowd. kineticresearchgroup.com

It was a strong SHOT Show for Manners. First off, they released a new flagship competition stock, the PRS-TCS (Tunable Competition Stock), with an innovative hidden-weights system, which will surely be home to more than a few open-class NRL22 barreled actions in the coming season. Second, they announced a dedicated Ruger 10/22 stock, based off their popular MCS-CS collapsible stock system. Compared to the centerfire version, this 10/22 model has a trimmed down grip for smaller hands. The snap-in-place, adjustable length-of-pull buttstock runs from 10 to 13.5 inches. At the booth, the Manners guys told me the CS 10/22 will ship with shims, so a wide variety of Ruger and aftermarket receivers will fit snug. $759; mannersstocks.com

Read Next: Best New Rimfire Rifles and Handguns of the 2020 SHOT Show

“Less space-gun, more traditional rifle feel.” That’s how an engineer at MDT described their new XRS Crossover. British Columbia-based MDT has become synonymous with 100-percent aluminum competition chassis. The XRS is their first stab at a polymer-wrapped stock system with more conventional rifle ergonomics. The core of the chassis is an aluminum bedding block with screwed in polymer panels and buttstock. The length-of-pull is spacer adjustable from 13.75 to 15 inches or more. An angled and vertical (space-gun style) grip is included, and it takes AICS pattern short-action mags. The initial inletting is centerfire-only (though I’m certain a few Rem700 .22 LRs will be early adaptors here) but rimfire nerds still need to pay attention. An inlet for CZ 455/457s will be available later this year. $499; mdttac.com

PROOF Research took the carbon-wrapped precision rifle barrel and made it mainstream. Now they’re making a hard charge for the rimfire aftermarket. Carbon is lighter than steel, dissipates heat better, and is strong enough for airplane wings. In a show of just how popular rimfire is getting, PROOF announced a slew of pre-fit barrel options. As one of their engineers told me at SHOT, “It’s the year of the .22.” In all cases, these are button rifled barrels, hand-lapped, and pre-fit for a DIY install, no gunsmith required. Available models include Ruger 10/22, Ruger Precision Rimfire, CZ 455/457, Anschutz 1761, Zermatt RimX, and Tikka T1x coming soon. $620 and up; proofresearch.com

If you’re annoyed that the very best .22 rifles now cost more than a used ATV, blame Vudoo Gunworks. This crew out of St. George, Utah single-handily disrupted the rimfire market by creating a blazingly accurate .22 LR action on a Remington 700 footprint that feeds on converted AICS short action magazines. The first Vudoo magazines were polymer. This year at SHOT they announced aluminum versions, in five-, ten-, and 15-round capacities. Why does this matter? First, aluminum doesn’t swell like polymer and create potential feed issues. Second, with more and more companies building out rimfire actions designed for AICS, we want the magazines to be good—and these magazines are good. What else would you expect from Vudoo? $75 to $85; vudoogunworks.com