Jeff Cooper envisioned a short, lightweight, powerful rifle, capable of handling just about anything asked of it. Here are 5 fine examples 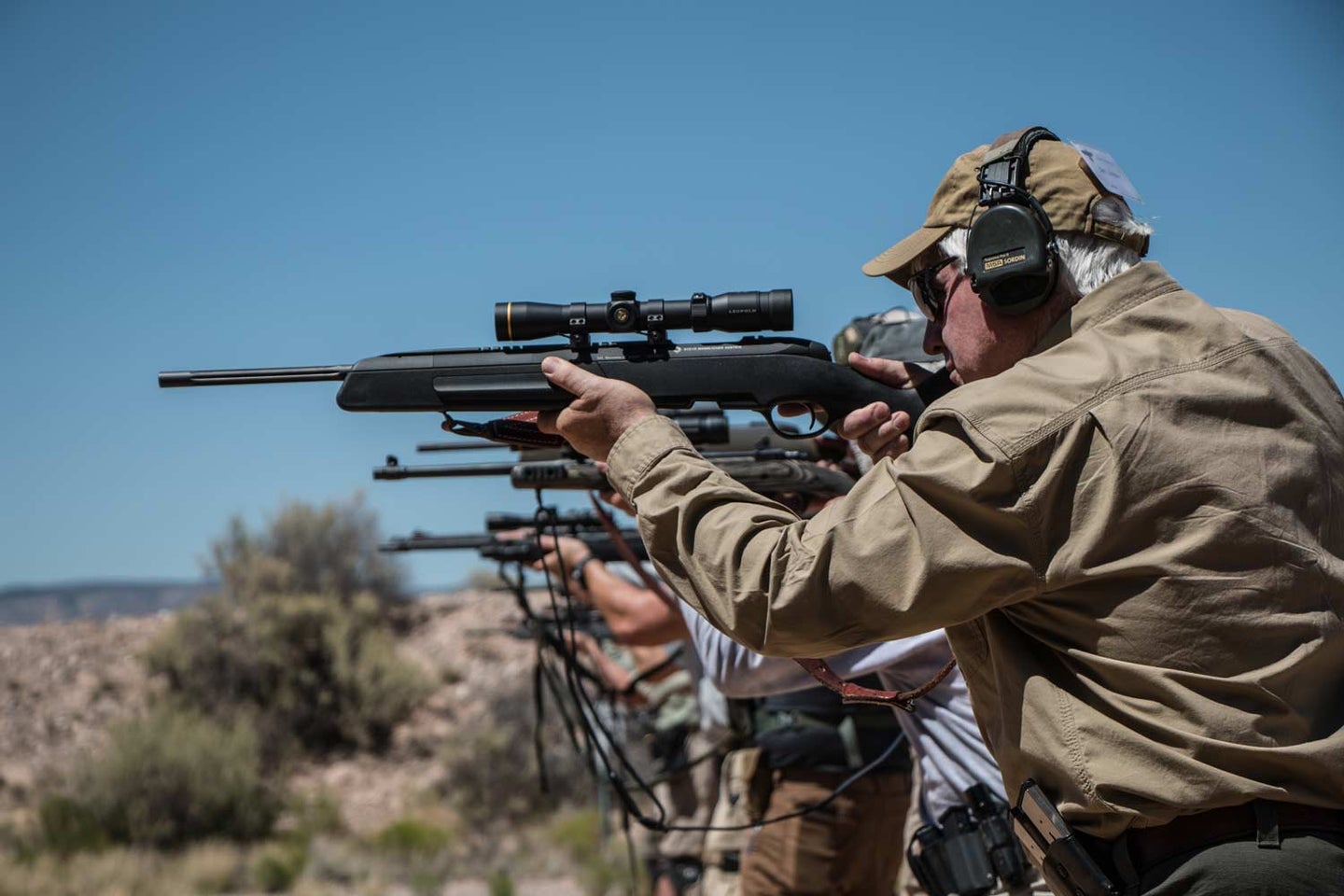 A line of shooters take aim with a variety of Scout Rifles. Richard Mann
SHARE

What Cooper hypothesized was a general-purpose weapon, with world-wide application, that was just as effective for big-game hunting as for survival or military scouting. At the time, the only way anyone could lay his hands on such a rifle was with the help of a custom gunsmith. That changed in 1997, when Steyr introduced the Steyr Scout Rifle, which Cooper helped design.

Now, 23 years later, the Scout Rifle concept remains somewhat of an oddity to many, but there are now several commercial options to choose from. None, in fact—including the Steyr—completely meet the comprehensive standard Cooper envisioned for a true Scout Rifle. As I said in my book, The Scout Rifle Study, his ideal all-purpose long gun remains an enigma—an idea that riflemen dream about and rifle manufacturers are still pursuing. But in that pursuit, several companies have put out very handy and useful rifles. Here are four, plus a fifth option to have a great scout rifle built specifically for you.

Mossberg wisely adapted their excellent MVP platform, which when chambered in .308 Winchester will feed from AR10 or M1A magazines, to offer some of the features Cooper specified for a Scout Rifle. The gun is less than a meter long, comes with a full-length rail that’s compatible with traditional or scout scopes, and is outfitted with an aperture rear sight and a fiber-optic front. At 7 pounds, it exceeds the 6.6-pound limit, but those extra few ounces get you a threaded muzzle and two short sections of Picatinny rail on either side of the fore-end with which to attach accessories. At just over $600, the MVP Scout Rifle is the least expensive option on this list, yet it is reliable and will meet the 2-MOA precision requirement. Check availability here.

Over the years, Savage has manufactured a variety of Scout Rifles. Their current offering is the 110 Scout, which at 8 pounds is well over Cooper’s limit. However, it does incorporate the excellent Savage AccuFit stock, which has an adjustable length of pull and comb height. The latter is critical with a Scout Rifle to get a proper cheek weld when shooting through the optical or open sights. In addition to .308 Winchester, Savage also offers the 110 Scout in .223 Remington, .338 Federal, and .450 Bushmaster. It too has a threaded muzzle with a large but recoil-reducing muzzle brake. Check availability here.

Ruger worked with Gunsite Academy to develop what was originally called the Gunsite Scout Rifle. Although it was never intended to meet every aspect of Cooper’s Scout Rifle concept, the rifle does capture the essence of his idea. Now known more simply as the Ruger Scout Rifle, it comes in multiple variations chambered in .308 Winchester, .350 Legend, and .450 Bushmaster. The bare rifle weighs as little as 6.3 pounds and features fixed sights, a scout scope rail, detachable magazine, and an adjustable length-of-pull, with the option of a walnut, laminated hardwood, or synthetic stock. These are rugged rifles that will last a lifetime. Check availability here.

Steyr designed their Scout Rifle with input from Cooper, and while the finished product did not meet Cooper’s maximum weight limit of 3 kilos, it checked off most other boxes, and offers a number of nice features, including an adjustable length-of-pull, flip-up open sights, an integral bipod, and the ability to store an extra detachable magazine in the butt stock. The magazine also has a detent that allows you to feed single rounds into the action while keeping the full magazine in reserve and available with just a push. The Steyr Scout Rifle will also accept a traditional riflescope as easily as a scout scope. Weighing in at just over 6.6 pounds, the Steyr, which is chambered in .308 Winchester, isn’t cheap at around $1,700. They are tack-drivers, though, and if you’re willing to pay, you’ll get the best factory-made Scout Rifle on the planet. Check availability here.

A talented gunsmith can assemble a Scout Rifle for you, building it on your own bolt-action rifle or a new one. The key is to find someone capable of effectively and squarely attaching a scout-scope mount that will likely have to be crafted from scratch. The Remington Model Seven is a great rifle to start a custom Scout Rifle build on, but so too are the Ruger American and Mossberg Patriot rifles. Jerry Dove at Dove Custom Guns in Princeton, WV, and Jim Brockman of Gooding, Idaho, have built Scout Rifles on numerous actions and do an excellent job of crafting scout-scope mounts. Modifications on your rifle can range from as little as $500 to several thousand. But even then, you will struggle and spend a lot of money trying to meet the magic weight limit of 3 kilos with the scope and sling installed. That said, you’ll have fun coming close, and wind up with a great rifle, to boot.