How to Build the Ultimate Turkey Shotgun

You can kill a turkey with just about any working shotgun. But doing it with a project gun that you’ve customized to suit all your wants and needs is a real blast 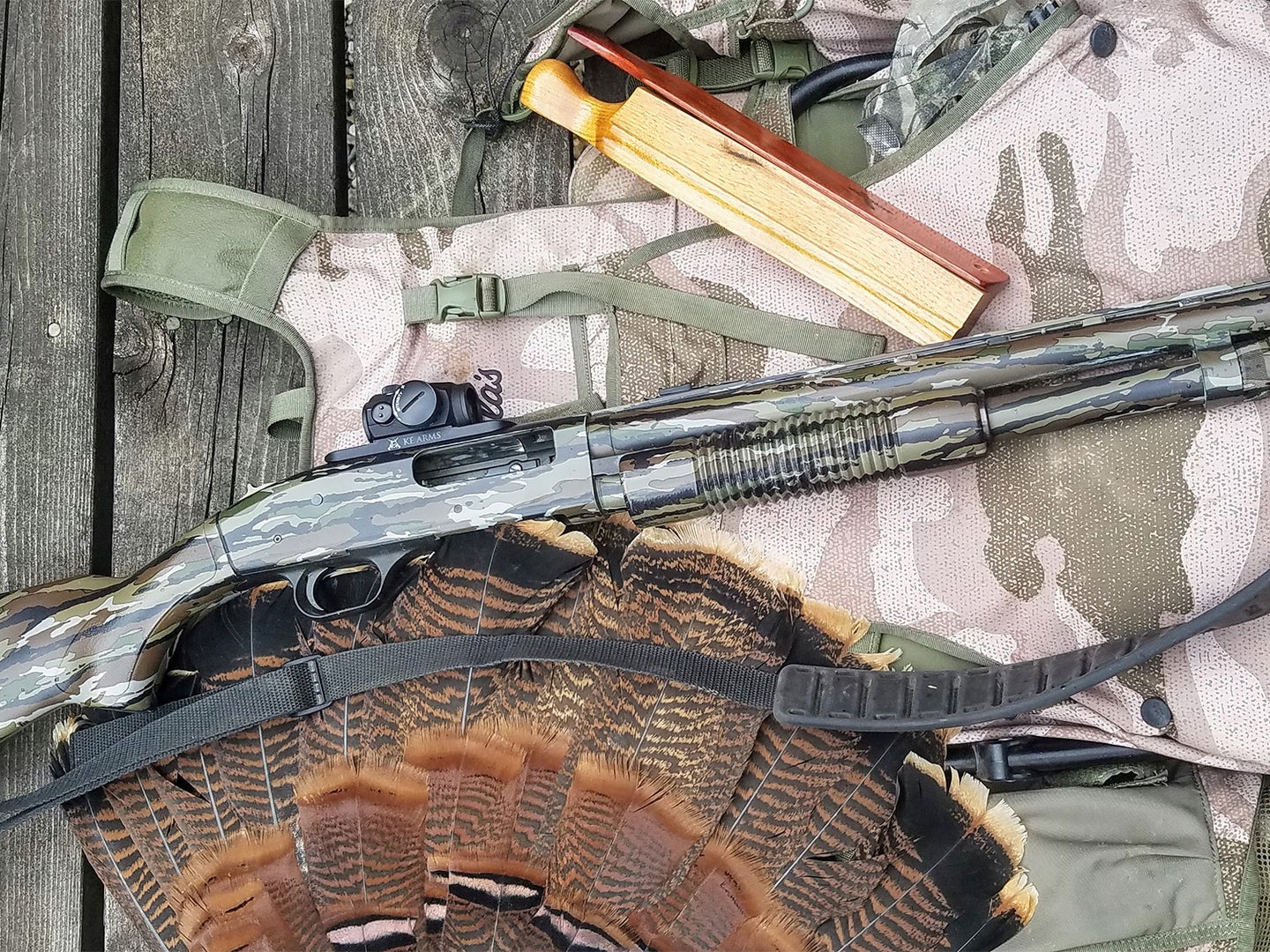 No one needs an ultimate turkey gun. All you really need is patience and the self-control to let a turkey step inside 30 yards. At that range, any gun, from the bird’s standpoint, is ultimate. Nevertheless, an ultimate turkey gun is a handy thing to have on your side. If you want to better your chances of filling a tag; if you want to reach out to 50 yards or more; or if you just enjoy fiddling with guns, customizing a shotgun for the turkey woods makes for a fun and useful project.

The buy-in is low. There are plenty of affordable, highly suitable shotguns waiting to be turned into dedicated turkey guns. My current model wasn’t “affordable,” it was dirt cheap, at $175. It has cost me quite a bit since, but I enjoy tinkering with it and hunting with it.

You can do as much or as little as you like to your project gun. Here are the basic categories to consider.

Best Chokes for a Turkey Shotgun

Tight patterns are essential to all but very close-range turkey shooting. If your gun has a fixed choke, find a gunsmith who will thread it for choke tubes, which can be done to most single-barrel guns for a little over $100. If your gun is threaded for chokes, buy a tube. I have been happy with the Truglo Strut Stopper in my Mossberg 835, and I’ve had good luck with the Rob Roberts .660 tube in my backup Remington 870 using almost any load. From a cost standpoint, it makes more sense to buy one tube and try several different loads until you find the right one, rather than accumulating choke tubes.

You might be able to buy a shorter barrel for your project gun, or you can have the current barrel bobbed. Turkey guns have short barrels, but it’s possible to go too short. Eighteen-and-a-half- and 20-inch barrels are handy, but it can be tricky to get them to pattern well. If you’re having a barrel shortened and threaded for chokes, keep in mind that 24-inch barrels are short enough to make a gun compact, but long enough to stabilize a shot charge for good patterns.

Turkey guns need slings so you can call hands-free and tote birds out of the woods. Personally I dislike the slings that loop over the stock and barrel, but they are better than nothing. Installing a sling-swivel stud in a stock is easy if you’re handy, especially if you buy a special jig from Brownell’s. Having put one or two studs in off-center, however, I no longer do my own. You can find a magazine cap with a swivel stud installed for most popular pumps or semiautos and barrel bands for the rest.

Top Finishes for a Turkey Shogun

You can kill turkeys with an un-camoed gun, and if your project gun is a classic Model 12 or Auto 5 or even just a clean old 870 Wingmaster ,ask yourself Really? before you break out the rattle can or have it dipped or Cerakoted. You can have guns matte blued and take the sheen off a glossy stock with OOOO steel wool if you know what you’re doing. Mossy Oak gun wrap kits are a good, reversible way to camo a gun. Or you can leave a gun shiny, hold still, and shoot turkeys anyway.

I have had one gun Cerakoted and few dipped, the last by Specialty Camouflage Products, Inc., who did an excellent job.

A crisp, light trigger makes taking accurate shots at turkeys easier, and it’s a real benefit at the range, too, when patterning a hard-kicking gun. Gunsmiths can improve most shotgun triggers, and there are a few aftermarket parts available for popular guns. Timney sells a great 870 trigger kit, and Briley offers triggers and sears for several semiautos.

The Best Sights for Turkey Hunting

Some kind of sighting device makes it easier to stay on target and, more to the point, harder to miss. I have shot turkeys with every kind of sight from a brass bead on a plain, ribless barrel to a Swarovski dangerous-game scope with an illuminated reticle. They all work if you point them properly, but some make pointing easier than others do.

If you do nothing else, have a gunsmith install a middle bead. For several years I hunted with a BPS on which I’d added a large orange front bead in front of a white middle bead. Even in dim light I could tell when I had the white lined up against the orange.

Iron sights and peeps represent an upgrade over beads, and there are quite a few that attach with sticky tape, magnets, or set screws from HiViz, Truglo, and other makers. Don’t overlook peep sights and ghost rings, which get you on target fast. If you want something more durable than stick-on or clamp-on sights, find a gunsmith to install something permanent.

If your gun comes drilled and tapped, it’s easy to mount a rail for an optic. Steel receivers are easy to drill and tap, alloy receivers, not so much. For the latter, you’ll need some kind of saddle mount that wraps around the receiver if you want to put a scope or red dot on the gun.

The Vortex Venom red dot sight goes for about $240. Vortex

I went with an Aimpoint Micro H1 for my Mossberg 835. Nobody needs battlefield reliability and 5-year battery life for turkey hunting, but that’s what I went with. There are lots of good sights for less: any Holosun, Burris FastFire III, Truglo Ignite, or Vortex Venom. Turkey scopes are hard to find these days because people prefer red dots and most turkey scopes are discontinued, but Leupold’s VX-Freedom 1.5-4x Pig-Plex is a good option.

There are several ways to go with aftermarket turkey gun stocks: practical synthetic, tactical pistol-grip, or dressy walnut. I hunted with an adjustable, tactical pistol-grip stock for a couple of seasons. It was as ergonomically perfect for turkey hunting as it was hideously ugly.

Add a pad if you want to. There are plenty of good ones, including from Limbsaver, Kick-Eez and Pachmyar. Some are made to fit specific guns without grinding, too, so it’s an easy project. I don’t care a lot about pads because I don’t feel the gun go off in the excitement of hunting, and I am padded up and/or shooting from a Lead Sled at the range. On the other hand, if you want to shorten a stock to make a gun easier to handle in the woods, you may as well have it cut and put a good pad on it.

A lot of guns make good platforms for project guns, but a few are better than others because of the variety of aftermarket parts available or because they have qualities you might not find on other production guns. Here are a few ideas for a starting place for your ultimate turkey gun.

Popular in the tactical/home defense markets, Mossberg pumps make great project guns because there are so many parts available. My current turkey gun is an 835 to which I have added, among other things, a neat tactical safety from NDZ and a very slick low-profile mount for an Aimoint H-1 Micro made by KE Arms. It has also been dipped in Original Realtree camo. Most parts that fit on 835s and 500s interchange, and all of these guns have drilled and tapped receivers.

The 870, like the Mossberg 500, has been around forever, and there’s almost no end to the parts you can find made to fit it for both hunting and tactical use. My other turkey gun is an 870 Super Magnum with a synthetic Monte Carlo stock, Rob Roberts choke, and a Timney trigger fix kit installed. I upgraded the springs, follower and extractor, too, just in case of the turkey zombie apocalypse. The receivers of these guns are steel and easy to drill and tap if they didn’t already come that way, as mine did. If you’re lucky you might run across the old 21- or 23-inch Special Field 870 that also features a classy straight grip stock, and I should point out, too, that a 20-gauge 870 Youth gun makes up into a great turkey gun, too. If you prefer semiautos, there are lots of old 1100s you can pick up inexpensively, although the 3-inch guns are a little harder to find.

Light and reliable, the M2 makes a good candidate due to its popularity among 3-gun shooters and the comparative ease with which it can be drilled and tapped for a gun with an alloy receiver. Quite a few of these were made with 24-inch barrels, too.

If you want the ultimate in lightweight, run-and-gun shotguns, find an H&R single shot. There’s enough steel at the breech end to have it drilled and tapped for an optic. You’ll need to add a hammer extension if you mount a scope. Throw some swivel studs on it and have the barrel cut down and threaded for choke tubes. It’s not worth much money, so you can feel free to spray paint it yourself if you don’t want it dipped. I realize that sinking a bunch of money into a gun worth about $100 makes no sense, but that’s the essence of gun projects.

The Stoeger Coach Gun cost little yet gives you two barrels, two chokes, and two triggers. The problem with turkey chokes and the best loads is that they pattern so tightly, you can kill birds at long range, but you’re likely to miss or mangle up close. Put a turkey choke in one barrel and IC in the other. Add a rail or iron sights on the rig, and you can instantly switch between your 50-plus yard barrel and your 20-yard barrel. It’s one double gun you can camo dip without regret, too.

This same concept would work with a lot of different doubles and O/Us. I have thought of putting swivel studs and a pair of extended chokes—one tight, one open—into a Ruger Red Label I rarely shoot. Someone at Briley Manufacturing told me once they liked to start with a Remington 3200, shorten the barrels, and install one open and one very tight choke. Apparently they sold guns a bunch to rich Texans who were tired of missing turkeys.