Get a first look at the year’s hottest new shotguns for waterfowl, upland birds, and turkeys—including some can’t-miss bargains 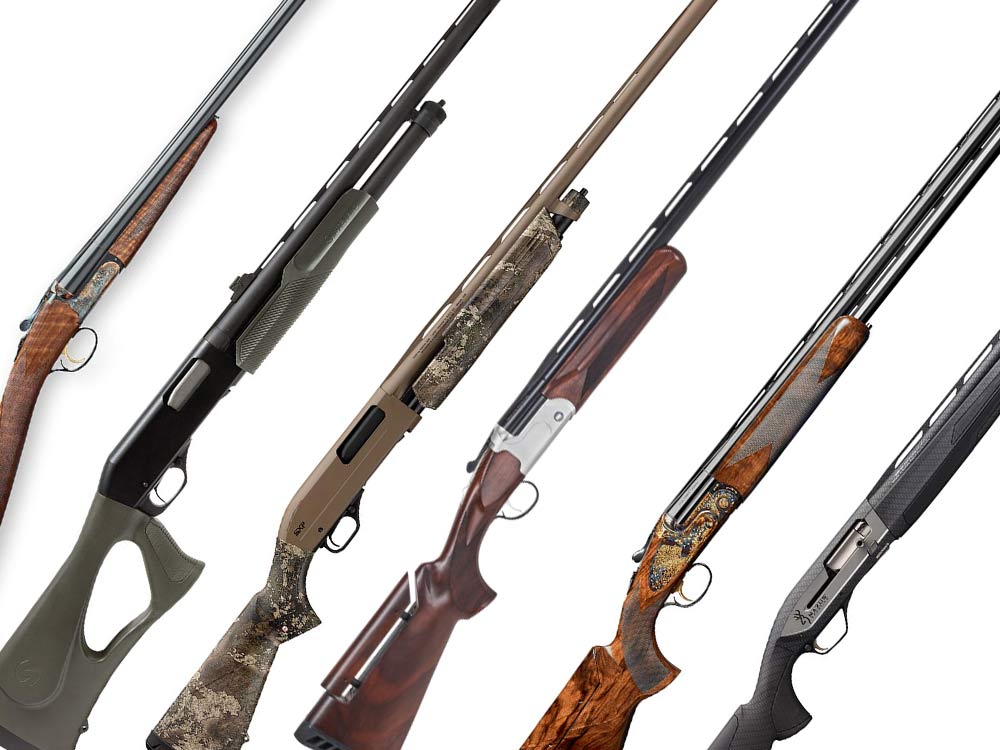 A selection of the best new shotguns for 2021. Field & Stream
SHARE

Follow our full coverage of the best new hunting and shooting gear of 2021, including compound bows, crossbows, broadheads, handguns, rifle and shotgun ammo, and more.

SHOT Show by Zoom and Powerpoint replaces the in-person version this year, but it hasn’t stopped the industry from introducing some fine new shotguns or—more often the case—making major improvements to existing models. Several popular shotguns received major tweaks, from Browning’s re-done Maxus II to Mossberg’s O/U line. While I don’t mind missing out on trudging the aisles of the Sands Convention Center, I do wish I could get my hands on a few of these new guns. That will have to wait, but in the meantime, here’s a preview of the best new shotguns for 2021.

And stay tuned, because several companies are set to release their new for 2021 shotguns in just a few days. We will update this story as soon as they do.

Browning’s big shotgun news this year is the Maxus II, an updated version of their flagship gas semi-auto. Retaining popular features from the original, like the TurnKey magazine plug, Inflex recoil pad, speed-loading port, and a magazine cutoff, the Maxus II adds an enlarged bolt handle and release and a soft comb insert to further reduce recoil. It also does away with the Maxus forend latch (which, between you and me, I never liked), replacing it with a conventional magazine cap. It will come in black synthetic, camo, and a carbon-fiber-patterned sporting model, each in 3- and 3½-inch 12 gauge.

The first 3½-inch semi-auto, the Super Black Eagle made Benelli a household name among waterfowl hunters who learned to rely on it in the worst conditions. This year, 3-inch 12- and 20-gauge models join the 3½-inch SBE3 in the lineup. They share all the features of the 3½-inch SBE3, including a carbon-fiber rib, recoil-reducing ComforTech stock, enlarged controls, and the Easy Lock bolt that’s impossible to knock out of battery.

The 3-inch 12 makes a versatile choice for hunters who want to cycle lighter practice and dove loads, and the 20 should appeal to the growing number of hunters who enjoy the reduced weight and recoil of a smaller bore in the duck blind. The guns will come in black synthetic and Optifade camo.

Stoeger’s 3½-inch inertia gun comes in a special spring snow goose version for 2021. It features an extended 10-shot magazine and oversized bolt handle and closer so you can keep feeding shells into it when the shooting gets fast. It also comes with five extended chokes, so you can be ready for days when the juvies decoy close and the days when shots are long. Finished in distressed white Cerakote and equipped with a black paracord sling, I’ve got to say this gun looks cool, too, which is at least half the battle.

The popular Affinity inertia semi-auto gets the full turkey treatment for spring. It features Benelli’s highly ergonomic Steadygrip stock paired with a 24-inch barrel that is short enough to be maneuverable, but long enough for good patterns with the included X-full Rhino choke tube. The Affinity 3 Turkey Elite features a Picatinny rail for mounting optics as well as open sights, including a hooded front sight. Metal parts have a Midnight Bronze Cerakote finish and the stock and fore-end are covered in Optifade Subalpine camo. It’s available in 3-inch 12- and 20-gauge models.

Winchester used to call the SXP the “speed pump” because, thanks to a rotary bolt design, the gun practically pumps itself it’s so smooth. The Hybrid Hunter model comes with PermaCote metal (Winchester’s version of CeraKote) and a camo synthetic stock finish. In other words, this will be a durable, reliable gun you can take on any hunt. Light in weight, at just under 7 pounds, it comes in 3- and 3½-inch 12 gauge and 3-inch 20 gauge versions.

The news for 2021 is that the trigger guard has been redesigned to be more ergonomic and easier to use with gloves on. And, for the 15 percent of the population that is left-handed and left out of so many things, the SXP will finally come with a safety button that can be reversed for left-handed use. I know, 85 percent of you don’t care, but the rest of us do. Lefties and righties will be impressed by the price tag.

The Stevens 320 pump is of the least expensive slide-action shotguns on the market, a Chinese-made gun clearly inspired by the Winchester SXP. Like the SXP, it’s a very slick-shucking gun, and this year it comes in a dedicated 3-inch 12- or 20-gauge turkey model. With an ambidextrous thumbhole stock, a 22-inch barrel with an X-Full extended choke, adjustable sights, and sling-swivel studs, the new 320 Thumbhole is woods-ready for a ridiculously low price.

Although parent company Caesar Guerini no longer exhibits at SHOT, the new Fabarm Autumn double will still attract a lot of attention for 2021. Featuring classic lines and a case-colored receiver enhanced by deep relief engraving, the Autumn is the first double offered by Fabarm. The matte finished wood is available in both a straight-grip/splinter fore-end model or a pistol-grip version with a hand-filling beavertail fore-end. Purists might complain that the gun lacks a second trigger, but many will appreciate the crisp, single selective trigger on the Autumn. Fit and finish are excellent, the weight is light, the balance is good, and the gun comes in 20 gauge with a choice of 28- or 30-inch choke-tubed barrels.

For 2021, Caesar Guerini/Fabarm’s successful women’s gun company, Syren, debuts the Julia, a sporting-clays O/U with a stock designed to better fit most women. As the new, top-of-the-line Syren target gun, the Julia is beautifully decorated with gold inlays on its case-colored, side-plated frame. I am the wrong person to ask, but the floral design of a woman (Julia herself?) blowing dandelions strikes me as attractive without being girly. The gun features a richly figured walnut stock with a monte carlo comb, a tighter pistol grip, shorter length of pull, and turned out toe—all features designed to accommodate women’s anatomy. The comb is also adjustable. It comes in 12 gauge with 30-inch barrels.

Stevens 555s have earned a reputation as good—and good looking—affordable field guns. This year Stevens adds a single-barrel trap gun to the lineup. The 555 Trap’s oil-finished Turkish walnut stock features an adjustable comb, while the 30-inch barrel has a raised rib and comes with three choke tubes. The alloy receiver is reinforced with steel at the breech to withstand heavy use, and the gun comes in both 12- and 20-gauge versions at a price low enough to get anyone started in trap shooting.

Mossberg announced a new lineup of International Reserve O/Us, comprised of both Silver and Gold Reserve guns, that replaces and improves on the old Silver Reserve line. Made by Khan in Turkey, the Silver Reserve first appeared in 2005. The guns have improved steadily since those early, clunky models with brittle firing pins. The 12-gauge Gold Reserve Black Label I have on loan is a lively gun that exhibits good wood-to-metal fit and a nicely figured, satin-finished Turkish walnut stock. It’s a lot of gun for under $1,000.

The lineup starts with a black synthetic-stocked 12-gauge and comprises hunting, youth guns, and target guns, including a Gold Reserve Super Sporting with fully adjustable comb and pad. Prices start at just $636 for the black version, and top out at $1,221 for the Super Sport.

Beretta’s 680 series remains one of the best, most durable and popular O/Us in the world. The latest model is a reboot of the Silver Pigeon III, a more highly decorated version of the workhorse SP I. The updated model features a restyled forend, a satin-gloss grade 2.5 walnut stock, and an all-new engraving pattern executed by a 5-axis laser. Unlike so much laser engraving, which looks shallow and cheap, the Silver Pigeon’s game scene and scroll pattern have the deep relief look of hand-engraving. The gun has Beretta’s Optima HP choke system and, listing at $2699, is a lot of gun for the money.