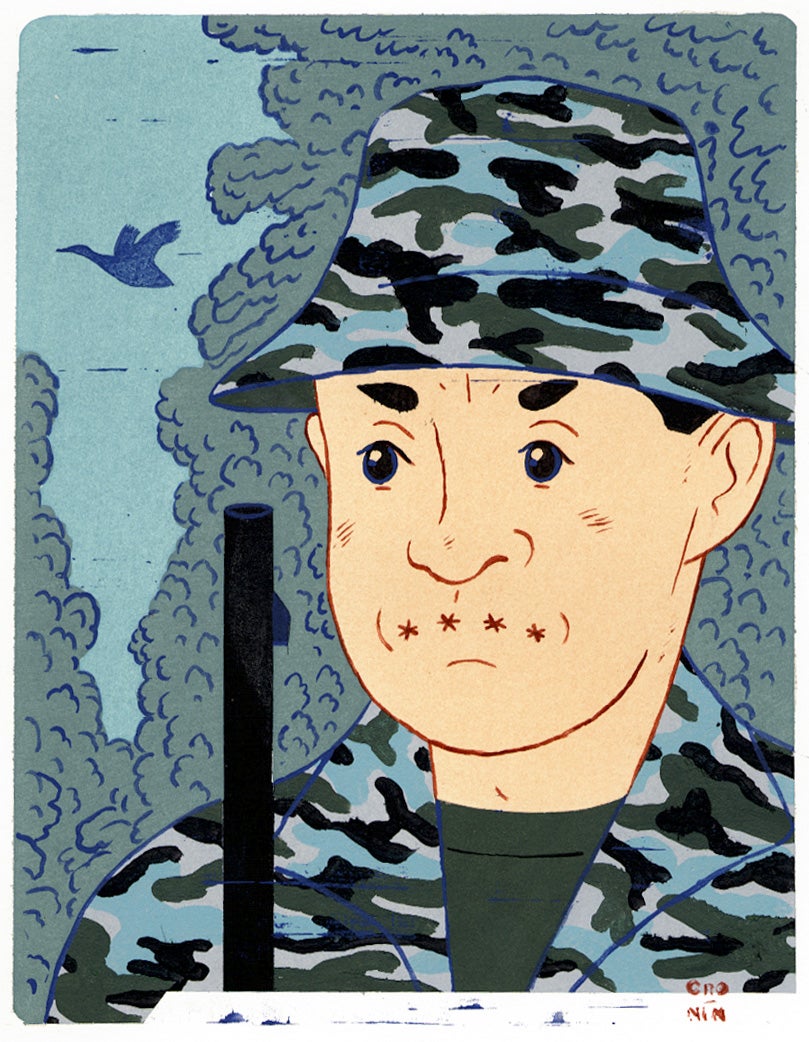 Editor’s Note: To celebrate David E. Petzal’s 50th anniversary at F&S, we’ve asked staffers and contributors to select and share their favorite story of Petzal’s (no easy task—there are a lot of good ones). Kicking things off is hunting editor Will Brantley, who chose “Oh, ****!” published in November 2003.

It’s comforting to know a guy like David E. Petzal can keep a job for 50 years without resorting to TikTok. I’ve never heard anyone who worked directly with Petzal describe him as particularly subtle or warm, but he’s never been anything but kind to me.

What I enjoy most about Petzal’s words has nothing to do with rifles. Some of his favorite words, like son of a *****, ***t, and ***********r, are also among my own favorites. Over and again, editors have warned me not to cuss so much in the stories I write. I’ve never paid any attention to that b******t. I know what I heard in hunting camps when I was growing up, and I know what I still hear in camps around the world. One time in Argentina, I listened as my guide, Callie, teased with the other guides following a duck hunt. “What’d he say?” I asked the translator, since they were speaking Spanish. She replied, “Callie called them all whiny little ******s who need to teach their clients how to shoot.”

“Oh ****!, A Sportsman’s Guide to Profanity,” describes proper cursing as what it really is: an artform. Petzal writes: “The redneck peckerwoods in the services, and in Dixie (often the very same redneck peckerwoods) have elevated profanity to something near poetry.”

To really appreciate it, you’ll have to read the rest of the ******g thing yourself. —W.B

Profanity is as much a part of hunting and fishing as Vienna sausage and wet toilet paper. It is a manifestation of the freedom afforded by the outdoors. If you want to say **** or ******* because it describes your gun or your dog or the deer or fish that just escaped, you may do so.

Through its long and glorious history, Field & Stream has had a strict antiprofanity policy, save for the occasional darn or drat. But now, in the 21st century, the restraints are at last coming off, and I can freely address some of the questions on its use that readers have sent in over the years.

Emphatically no. In 1971, I was invited to hunt in Montana by an outdoor writer with whom I had become acquainted. Since I had never been West before and was anxious to impress people as a man of taste and refinement, I showed up at his cabin in slacks, a sports jacket, and a tie. His wife, Priscilla, took one look at me and said, “Holy ****, Norman, what the **** have you brought in here?” Their Lab, Chief, bit me in the leg.

Priscilla could have said, “I’m very glad to meet you, but your mode of attire is ludicrous, and it is painfully obvious to even the most casual observer that you are badly out of place in a rustic setting like this.” But that would have taken much longer, and it wouldn’t have had nearly the same effect. As for Chief, I learned that I was lucky he only bit me in the leg. His usual form of greeting required people to take their trousers to the cleaners. Chief was, in the words of the doggy set, a “knee ******.”

Norman called Priscilla “The Duchess” because of her lack of refinement, but she was, and is, one of the most generous souls I’ve ever met, and a multitude of people owe her for a thousand acts of kindness. She simply let it out when cursing expressed what she felt.

Are There Times When You Shouldn’t Curse, Even When It’s Proper To?

Yes. Years ago, a member of a club I belong to missed a clay bird, and that cost him a major shooting championship. This fellow was not only a superb shot and a to-the-death competitor, but he was a gentleman, and instead of calling the unbroken bird a miserable ******* or a low-rent *********** he simply said, “Oh dear, that’s going to be very costly.”

Onlookers were hushed and awestruck, and I’m told that a few actually wept. In that moment he passed into legend.

Is Profanity Truly the Tool of the Ignorant, the Half-Bright, and the Uneducated?

No, and as evidence, I give you two great Field & Stream editors, Warren Page and Gene Hill. Both were Harvard graduates, and Page taught English at a very exclusive prep school. If there were two more literate, well-educated, and eloquent men, I don’t know who they might be, and both of them cursed with imagination, passion, and intensity.

Hill’s observations on the eventual disposition of some of his guns and rods were particularly fascinating, although anatomically impossible. But most of his conversation was so lewd, grotesque, and blasphemous that I cannot reproduce it here, even using asterisks for his choicer words.

To Page, the F word was mother’s milk, and he used it as all parts of speech. The first time he invited me to go shooting with him, I showed up with a ferocious-kicking rifle. Page, who hated recoil, looked at it and said, “What the **** are you going to do with that? That ******* gun is gonna kill you.”

On the third shot, the scope went an inch into my eyebrow, and as the blood poured down my shirt, he positively danced with joy. “I told you that ******* gun was gonna kill you.”

What Do You Regard as Good Hunting and Fishing Profanity?

It should be imaginative and should be used much as one uses spice in cooking. Applied sparingly, and with creativity, it makes conversation memorable. Once, in Illinois, I shot a pheasant that had not even leveled off in flight and hit him with every pellet in the shell and probably the wad, too.

Which was infinitely more descriptive than “Golly, you sure took that bird fast.”

Where Can I Learn How to Curse Artistically?

In basic training, I heard a drill sergeant inform a private that “Your footlocker smells like a cold wind coming off a pile of wet wolf ****.”

When I went to Fort Knox, Kentucky, I was warned that “We got mosquitoes so big down here they can **** a turkey standing flat-footed.”

As a ******* civilian again, on a deer hunt in South Carolina that took place in a weeklong downpour, I heard an aged Secessionist warn a youngster who had not brought his poncho that, “Boy, you gonna git soaked. It’s rainin’ hard as a tall cow ****** on a flat rock.”

Could Shakespeare (whose works are filled with profanity) have said it better? Hayull, no.

On a quail hunt in Texas, I listened to a fellow Yankee bragging to his host about his new cowboy hat. The Texan looked at it squinty-eyed for a minute and said:

That was the last we saw of the hat.

Do You See a Bright Future for Hunting and Fishing Profanity?

I believe that outdoor profanity is a growth industry. As long as dogs break points and hunters miss deer and trout snap tippets, there will be men and women who will stand tall and protest against uncaring fate using every word available to them.