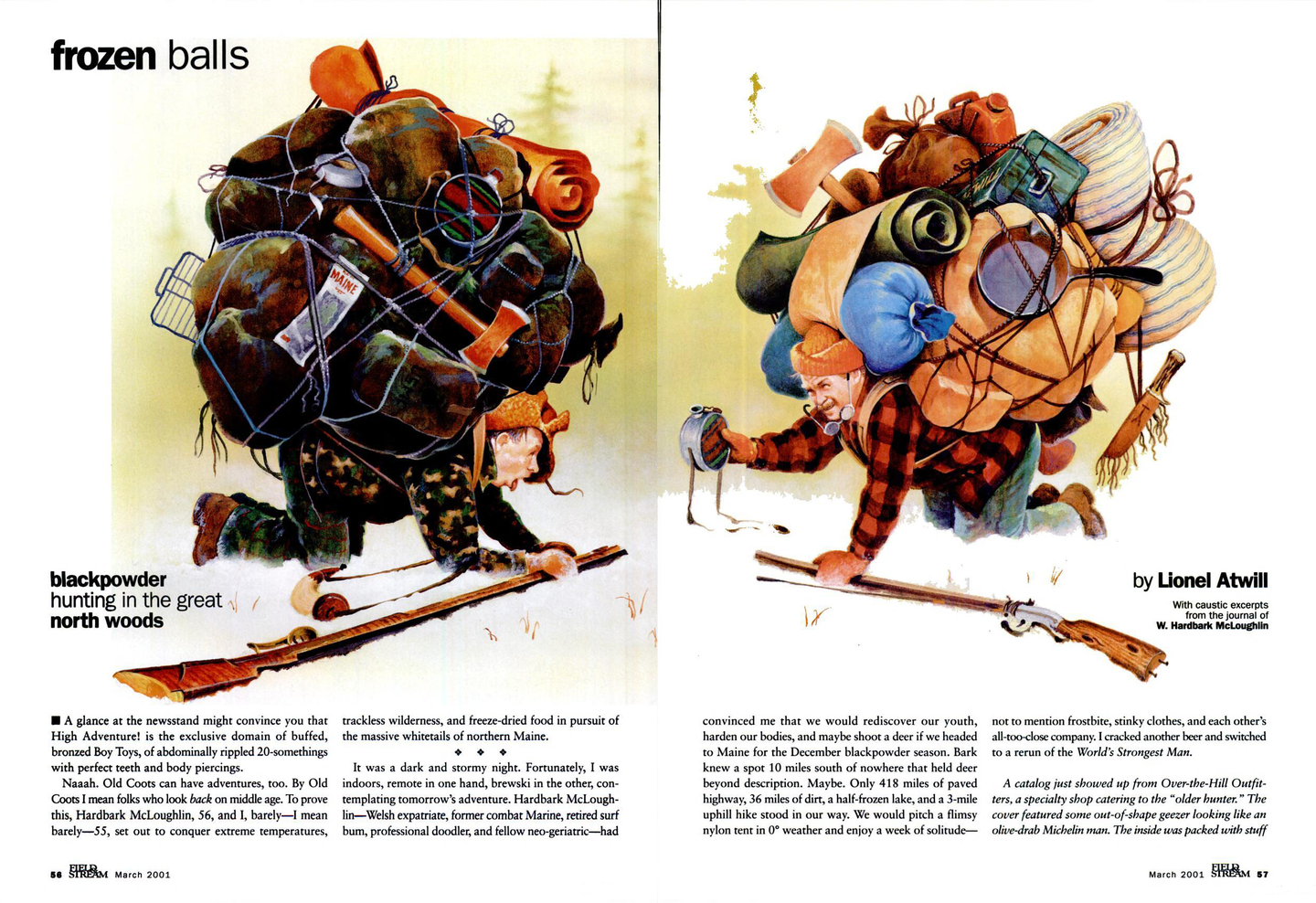 A hunting misadventure between two friends in the great North Woods

This story first appeared in the March 2001 issue. The story is a hunting misadventure between two friends, and features “caustic excerpts from the journal of W. HardbaRk McLoughlin,” an illustrator and regular contributor to F&S at the time.

A GLANCE AT the newsstand might convince you that High Adventure! is the exclusive domain of buffed, bronzed Boy Toys, of abdominally rippled 20-somethings with perfect teeth and body piercings.

Naaah. Old Coots can have adventures, too. By Old Coots I mean folks who look back on middle age. To prove this, Hardbark McLoughlin, 56, and I, barely—I mean barely —55, set out to conquer extreme temperatures, trackless wilderness, and freeze-dried food in pursuit of the massive whitetails of northern Maine.

IT WAS A DARK and stormy night. Fortunately, I was indoors, remote in one hand, brewski in the other, contemplating tomorrow’s adventure. Hardbark McLoughlin—Welsh expatriate, former combat Marine, retired surf bum, professional doodler, and fellow neo-geriatric—had convinced me that we would rediscover our youth, harden our bodies, and maybe shoot a deer if we headed to Maine for the December blackpowder season. Bark knew a spot 10 miles south of nowhere that held deer beyond description. Maybe. Only 418 miles of paved highway, 36 miles of dirt, a half-frozen lake, and a 3-mile uphill hike stood in our way. We would pitch a flimsy nylon tent in 0° weather and enjoy a week of solitude not to mention frostbite, stinky clothes, and each other’s all-too-close company. I cracked another beer and switched to a rerun of the World’s Strongest Man.

A catalog just showed up from Over-the-Hill Outfitters, a specialty shop catering to the “older hunter.” The cover featured some out-of-shape geezer looking like an olive-drab Michelin man. The inside was packed with stuff like camo-pattern Depends, hot-doe-scented dental fixative (“Brings the bucks in while you breathe!”), and walkers that doubled as ground blinds. I called Atwill he’d gotten one, too! “Bark, we’re on the Old Coot list, he said. “Well, I don’t want to be on the Old Coot list,” I told him. “Hell, I’m still in my prime. So are you. We’ve still got the Moxie, and we can prove it.” —W.H.Mc.

I picked up Bark the next morning and loaded his 115 pounds of lightweight backpacking gear into my truck. We headed to Maine by the shortest route, which involved circumnavigating New Hampshire and crossing the Canadian border four times.

We arrived at a remote sporting camp—our embarkation point—after sunset, which in B December at those latitudes occurs around 2 P.M. The proprietor, Don Hibbs, welcomed us and over a glass of bourbon took us on a map reconnaissance.

“We’ve seen deer here,” said Don, placing a ham-sized hand over a patch of land slightly larger than Connecticut. “Course, they could have moved.”

This narrowed our hunting down to an area defined by Canada to the north, the Atlantic to the east, and New Hampshire to the west and south. Piece of cake.

The morning was cool for Maine, which means balmy for the Arctic and freezing for the temperate world. Bark and I loaded a canoe and paddled across the lake, where we stowed the boat in the bushes. Then we tried to shoulder our packs. We had provisioned with care: freeze-dried food, no formalwear for dinner, and one bottle of booze per man-minimum stuff. Still, we weren’t going to be stupid. We each had a nifty little Motorola TalkAbout radio and a GPS. And a compass. And 25 pounds of survival gear. Plenty of clothing. Pots, water filters, first-aid kit, camera, powder, extra balls, patches, flints, nipples, caps, knives, binoculars, maps, tarps, toilet paper, stoves, flashlights, extra batteries. And Bark brought crayons. Together we were carrying the gross national product of Belize. Bark got his pack on first. Unfortunately, he was unable to stand up. Eventually we both managed to rise and totter uphill.

I don’t understand why a 115-lb. pack seems so heavy Hell, it never bothered me when I was in the Corps 38 years ago. Atwill, hunched over like a troll (despite his lighter pack), attempted to sound nonchalant when he said, “Ready to move?” Too bad the veins in his temples were the size of bicycle tires, and those aging knees rattled like dueling castanets. —W.H.Mc.

At the first semilevel spot near a stream we collapsed and began making up lies as to why this campsite was better than any place in North America. One very convincing reason was that goober-sized snow was now falling, and we couldn’t see much else of North America. Bark put up the tent. I foraged for firewood and rummaged through my pack for dinner makings.

I let Atwill break trail as a courtesy (what with him having been an Airborne Ranger and all). After several hundred yards he stopped and folded up like a cheap deck chair (the Ranger signal to make camp). “Stopping so soon?” I asked. I took a fix with my GPS, wrote BASE CAMP at that location on the topo, and erased the X at our original goal 1/4 mile away. One must be flexible… —W.H.Mc.

The snow abated as the sun dropped below the trees. “I think I’ll take a bath,” announced Bark, and I realized I was in the presence of a deviant. No sensible person takes a bath on the first day, and no one takes a bath in the snow. But Bark is not a person—he’s a Marine (there is no such thing as an ex-Marine). I heard him splash into the stream, whimpering and moaning. Seconds later a pair of wet underwear was hanging on a branch, where it promptly froze; it would fly as the camp flag for the rest of our trip. Bark’s butt disappeared into the tent to emerge moments later in clean wool. I started a fire, and Bark spent the next hour thawing body parts.

Showed I was still tough by punching through the ice to bathe. For the next two hours, I sounded like I was on helium. Atwill made his sense of field hygiene perfectly clear: “I wouldn’t get in that water even if I smelled like a burning tire!” Thanks to the climb, he already did. —W.H.Mc.

Not surprisingly, our dinner was a rushed affair. I prepared it in seven minutes; we finished it off in six. Then we planned the rest of our evening. We had two options: huddle inches in front of the fire, trying to remember the full text of the jokes that went with the many punch lines circulating through our ossified brains, or crawl into our sleeping bags. Since it was 5:30, we tried to recall the jokes. We lubricated our gray matter with a little bourbon, but that didn’t help. We built up the fire to a towering inferno, but all that did was broil our faces and make our backs feel colder. So we went to bed at 6:30.

The rosy fingers of dawn tickled us awake and in rosy-fingered sign language announced the first day of hunting. To understand what we were taking on, you must understand something about must understand something about big-woods deer in Maine. First, Maine hunters don’t talk much about antlers. Being sensible Yankees and practiced gourmets (lobster, cod, baked beans, fried clams, etc.), they know antler isn’t great table fare. What counts in Maine is body size. Anything under 200 pounds is not a real deer; it takes a 250-pounder to raise eyebrows. Body size is the basis for bragging because Maine has some big-bodied deer. Just not a lot of them.

There are two ways to hunt Maine bucks (all four of them): sit and wait for one to come along, or go looking. The waiting game is a low-odds proposition, like being knighted or getting a date with Heidi Klum. Actively looking for deer offers greater potential. We knew that whatever we did that morning would be active because the temperature was 2 degrees.

Hardbark decided to scout one side of a ridge. I would loop over a mountain and come back through an adjacent valley. We would cover a lot of country, and one of us might bump a deer into the other. We decided to have a radio check every two hours. If one of us fell and broke something, the other guy would know about it and could rush back to camp to rummage through the injured partner’s gear.

Typical Atwill radio check: “Bark? How you read me, over Say again, over? Say again? Over? Bark?—(expletive!)—Out!” Had fun with Atwill during the 1 P.M. check: “Atwill! Atwill! Buck coming your way! He’s huge! Coming straight for you! Sit tight! Sit tight!” Then I turned the radio off, went back to camp early, smoked one of his cigars, and got some shut-eye. —W.H.Mc.

We hunted all day, stopping only for snacks. Conditions were not optimal for still-hunting. The warmish snow of Sunday had frozen into a hard glaze that crack led like peanut brittle with each step. We never saw a deer. I watched the ugly end of a moose disappear into a patch of spruce, and Bark blundered into a bear lollygagging on a ledge 8 feet below him. When the bear saw Bark, he (the bear) swapped ends and headed to Canada. Bark swapped ends and headed to camp.

Where we enjoyed another round of freeze-dried glop, a double ration of bourbon, and 13 hours of sleep.

If you detect a pattern here, you are on the money: walk hard all day; see nothing: drink heavily to induce stupor; sleep. So it went for five days, broken only by such nonevents as test-firing of rifles, incessant radio checks, and the ravenous consumption of lunch goodies—gorp, salami, and cheese, the only real food of the trip.

By the third day, the cold had become no more than a minor inconvenience. We had fully smoked ourselves over the fire, so the issue of odor diminished—we both smelled like country hams. Even the food grew palatable. Bark actually had seconds on something masquerading as chicken potpie. If we hadn’t run out of bourbon, we probably would have stayed a few more days.

But we did run out, so in the spirit of Old Coot Adventurers, who know when to cut their losses, we broke camp and left the woods. Despite our deerless condition, we felt like heroes. Two old coots, we had dealt with big woods, hostile weather, and lousy food without killing each other, without bitching very much, and without getting hurt. The deprivations of our trip made eating at four different diners on the way home all the more enjoyable. Best of all, we felt a bit younger, heartier, and more buffed. Bark’s thinking about a body piercing. I check the mirror daily for the emergence of a six-pack.