F&S Classics: A Kind Word for the Horse

Curse him if you want, but when the going gets tough, you won’t find a better animal 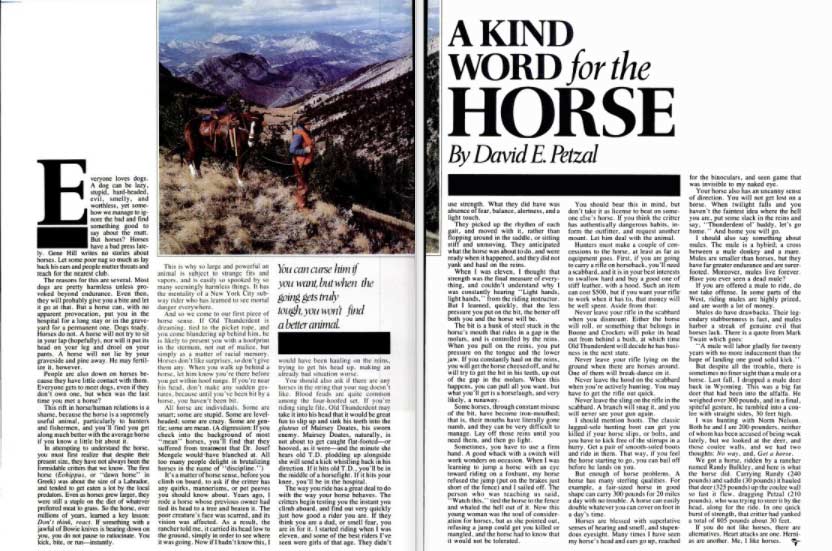 This classic essay is a rare instance in which Petzal praised the horse. Field & Stream
SHARE

To celebrate the 125th anniversary of Field & Stream, we’re going to share some of our favorite stories from the history of the magazine. Every day for the rest of the year, we’ll republish a new F&S Classic on the website. Today’s entry, “A Kind Word for the Horse” by David E. Petzal, was published in January 1986. You can find the complete F&S Classics series here.

Everyone loves dogs. A dog can be lazy, stupid, hard-headed, evil, smelly, and worthless, yet somehow we manage to ignore the bad and find something good to say about the mutt. But horses? Horses have a bad press lately. Gene Hill writes no stories about horses. Let some poor nag so much as lay back his ears and people mutter threats and reach for the nearest club.

The reasons for this are several. Most dogs are pretty harmless unless provoked beyond endurance. Even then, they will probably give you a bite and let it go at that. But a horse can, with no apparent provocation, put you in the hospital for a long stay or in the graveyard for a permanent one. Dogs toady. Horses do not. A horse will not try to sit in your lap (hopefully), nor will it put its head on your leg and drool on your pants. A horse will not lie by your graveside and pine away. He may fertilize it, however.

People are also down on horses because they have little contact with them. Everyone gets to meet dogs, even if they don’t own one, but when was the last time you met a horse?

This rift in horse/human relations is a shame, because the horse is a supremely useful animal, particularly to hunters and fishermen, and you’ll find you get along much better with the average horse if you know a little bit about it.

In attempting to understand the horse, you must first realize that despite their present size, they have not always been the formidable critters that we know. The first horse (Eohippus, or “dawn horse” in Greek) was about the size of a Labrador, and tended to get eaten a lot by the local predators. Even as horses grew larger, they were still a staple on the diet of whatever preferred meat to grass. So the horse, over millions of years, learned a key lesson: Don’t think, react. If something with a jawful of Bowie knives is bearing down on you, you do not pause to ratiocinate. You kick, bite, or run instantly.

This is why so large and powerful an animal is subject to strange fits and vapors, and is easily so spooked by so many seemingly harmless things. It has the mentality of a New York City subway rider who has learned to see mortal danger everywhere.

And so we come to our first piece of horse sense. If Old Thunderdent is dreaming, tied to the picket rope, and you come blundering up behind him, he is likely to present you with a hoofprint in the sternum, not out of malice, but simply as a matter of racial memory. Horses don’t like surprises, so don’t give them any. When you walk up behind a horse, let him know you’re there before you get within hoof range. If you’re near his head, don’t make any sudden gestures, because until you’ve been bit by a horse, you haven’t been bit.

All horse are individuals. Some are smart: some are stupid. Some are levelheaded; some are crazy. Some are gentle; some are mean. (A digression: If you check into the background of most “mean” horses, you’ll find that they suffered from treatment that Dr. Josef Mengele would have blanched at. All too many people delight in brutalizing horses in the name of discipline.”)

It’s a matter of horse sense, before you climb on board, to ask if the critter has any quirks, mannerisms, or pet peeves you should know about. Years ago, I rode a horse whose previous owner had tied its head to a tree and beaten it. The poor creature’s face was scarred, and its vision was affected. As a result, the rancher told me, it carried its head low to the ground, simply in order to see where it was going. Now if I hadn’t known this, I would have been hauling on the reins, trying to get his head up, making an already bad situation worse.

You should also ask if there are any horses in the string that your nag doesn’t like. Blood feuds are quite common among the four-hoofed set. If you’re riding single file, Old Thunderdent may take it into his head that it would be great fun to slip up and sink his teeth into the gluteus of Mairsey Doates, his sworn enemy. Mairsey Doates, naturally, is not about to get caught flat-footed or hooved, as it were and the minute she hears old T.D. plodding up alongside she will send a kick whistling back in his direction. If it hits old T.D., you’ll be in the middle of a horse fight. If it hits your knee, you’ll be in the hospital.

The way you ride has a great deal to do with the way your horse behaves. The critters begin testing you the instant you climb aboard, and find out very quickly just how good a rider you are. If they think you are a dud, or smell fear, you are in for it. I started riding when I was eleven, and some of the best riders I’ve seen were girls of that age. They didn’t use strength. What they did have was absence of fear, balance, alertness, and a light touch.

They picked up the rhythm of each gait, and moved with it, rather than flopping around in the saddle, or sitting stiff and unmoving. They anticipated what the horse was about to do, and were ready when it happened, and they did not yank and haul on the reins.

When I was eleven, I thought that strength was the final measure of everything, and couldn’t understand why I was constantly hearing, “Light hands, light hands,” from the riding instructor. But I learned, quickly, that the less pressure you put on the bit, the better off both you and the horse will be.

The bit is a hunk of steel stuck in the horse’s mouth that rides in a gap in the molars, and is controlled by the reins. When you pull on the reins, you put pressure on the tongue and the lower jaw. If you constantly haul on the reins, you will get the horse cheesed off, and he will try to get the bit in his teeth, up out of the gap in the molars. When this happens, you can pull all you want, but what you’ll get is a horselaugh, and very likely, a runaway.

Some horses, through constant misuse of the bit, have become iron-mouthed; that is, their mouths have literally gone numb, and they can be very difficult to manage. Lay off those reins until you need them, and then go light.

Sometimes, you have to use a firm hand. A good whack with a switch will work wonders on occasion. When I was learning to jump a horse with an eye toward riding on a foxhunt, my horse refused the jump (put on the brakes just short of the fence) and I sailed off. The person who was teaching us said, “Watch this,” tied the horse to the fence and whaled the hell out of it. Now this young woman was the soul of consideration for horses, but as she pointed out. refusing a jump could get you killed or mangled, and the horse had to know that it would not be tolerated.

You should bear this in mind, but don’t take it as license to beat on someone else’s horse. If you think the critter has authentically dangerous habits, inform the outfitter, and request another mount. Let him deal with the animal.

Hunters must make a couple of concessions to the horse, at least as far as equipment goes. First, if you are going to carry a rifle on horseback, you’ll need a scabbard, and it is in your best interests to swallow hard and buy a good one of stiff leather, with a hood. Such an item can cost $500, but if you want your rifle to work when it has to, that money will be well spent. Aside from that:

I should mention boots. The classic lugged-sole hunting boot can get you killed if your horse slips, or bolts, and you have to kick free of the stirrups in a hurry. Get a pair of smooth-soled boots and ride in them. That way, if you feel the horse starting to go, you can bail off before he lands on you.

But enough of horse problems. A horse has many sterling qualities. For example, a fair-sized horse in good shape can carry 300 pounds for 20 miles a day with no trouble. A horse can easily double whatever you can cover on foot in a day’s time.

Horses are blessed with superlative senses of hearing and smell, and stupendous eyesight. Many times I have seen my horse’s head and cars go up, reached for the binoculars, and seen game that was invisible to my naked eye.

Your horse also has an uncanny sense of direction. You will not get lost on a horse. When twilight falls and you haven’t the faintest idea where the hell you are, put some slack in the reins and say, “Thunderdent ol’ buddy, let’s go home.” And home you will go.

I should also say something about mules. The mule is a hybrid; a cross between a male donkey and a mare. Mules are smaller than horses, but they have far greater endurance and are surer-footed. Moreover, mules live forever. Have you ever seen a dead mule?

If you are offered a mule to ride, do not take offense. In some parts of the West, riding mules are highly prized, and are worth a lot of money.

Mules do have drawbacks. Their legendary stubbornness is fact, and mules harbor a streak of genuine evil that horses lack. There is a quote from Mark Twain which goes:

“A mule will labor gladly for twenty years with no more inducement than the hope of landing one good solid kick.”

But despite all the trouble, there is sometimes no finer sight than a mule or a horse. Last fall, I dropped a mule deer buck in Wyoming. This was a big fat deer that had been into the alfalfa. He weighed over 300 pounds, and in a final. spiteful gesture, he tumbled into a coulee with straight sides, 30 feet high.

I was hunting with Norm Nelson. Both he and I are 200-pounders, neither of whom has been accused of being weak lately, but we looked at the deer, and those coulee walls, and we had two thoughts: No way, and, Get a horse.

We got a horse, ridden by a rancher named Randy Bulkley, and here is what the horse did. Carrying Randy (240 pounds) and saddle (30 pounds) it hauled that deer (325 pounds) up the coulee wall so fast it flew, dragging Petzal (210 pounds), who was trying to steer it by the head, along for the ride. In one quick burst of strength, that critter had yanked a total of 805 pounds about 30 feet.

If you do not like horses, there are alternatives. Heart attacks are one. Hernias are another. Me, I like horses.