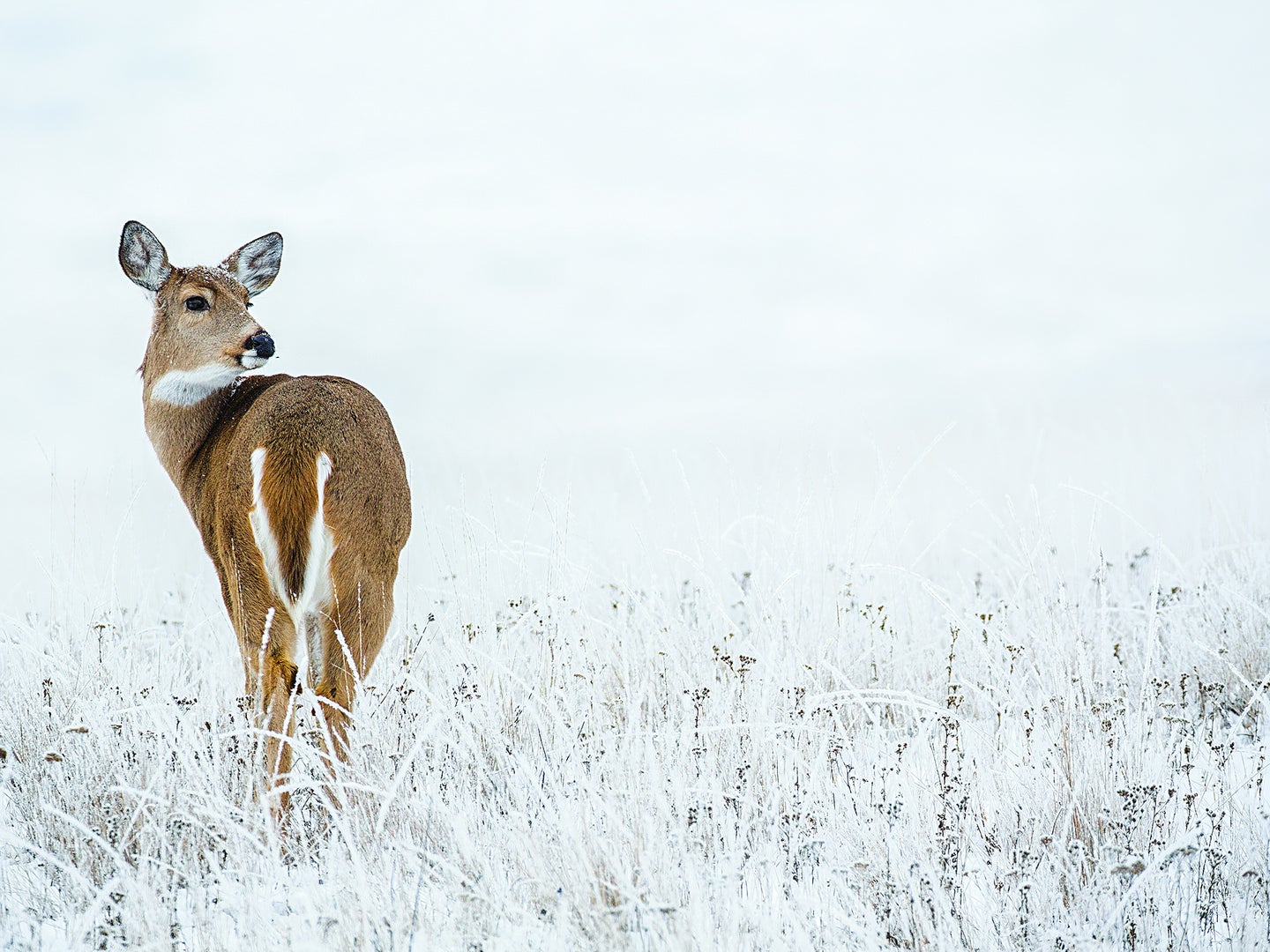 A whitetail doe checks her backtrail in a snow-frosted field. Donald M. Jones

Still reeling from divorce, the author rediscovers himself during a whitetail hunt

This story was first published in the February–March 2019 issue.

THE HUNT WAS OVER before it even started, and I knew it. I’d post-holed through 500 yards of knee-deep snow and had slowed to catch my breath before topping a rise that overlooked the picked beanfield. Peering over the crest, I met the gaze of a huge doe. She, along with another mature doe and four fawns, had been digging for waste grain right in front of my treestand. She foot-stomped once, then wheeled and ran, five bobbing tails following her into the hardwoods.

Most deer hunters have it wrong. The wariest deer in the timber does not wear a candelabra on its head, but a set of donkey ears. Any doe that’s raised at least three sets of fawns wakes up suspicious, breathes paranoia, and spooks on principle. Worse, every deer in the herd trusts her implicitly. One snort from an old matriarch will clear a field instantly, leaving very low odds that a single deer will return in daylight.

I knew I was in for a skunking, and a frigid one. I sighed and crunched my way to the stand anyway, as if accepting a punishment I felt I deserved.

I’d had a tough fall. Divorced only months before, I’d started the season in a slump. My best stands turned to duds, and all the deer I spotted were what I call “just-somethings”: just too far, just too young, just too…whatever. The worst part was that I didn’t much care—except for when it came to the Stranger Buck.

A huge, mainframe 8-point, the Stranger was a ghost of a deer, a loner that appeared and vanished. I’d had two encounters with him during the previous year and only a handful of trail-cam pics since, and yet he’d wiggled under my skin. He was probably the only thing keeping me in the woods that season.

Dealing with divorce isn’t a lot different from handling a death, and according to court documents, my marriage was officially dead in June. By the September bow opener, I’d settled into a kind of numbness that was better than the initial shock and pain but hung like a fog between me and anything that felt normal, let alone joyful. I knew my soul had to be in me somewhere, but I couldn’t make contact.

So I stumbled through the fall, and before I knew it, December had arrived, a month when snow and brutal cold can make for incredible, but challenging, hunting. Most years, it’s my favorite time of the season; this year, I was teetering. Did I really want to brave the elements, or just call it a year and hope my head was in a better place next fall?

I was leaning toward option one when I found the Stranger Buck. Conditions were perfect: a straight north wind, numbing temps, half a foot of snow on the ground. At midday, with three days of the season remaining, I headed out to hunt the one food plot I knew was in his wheelhouse. I felt a slight tingle stirring in me as I left the house, a buzz I’d scarcely felt in months.

As soon as I stepped into the plot, I spotted him, or rather his right antler, sticking out of the snow. The Stranger Buck had died within bow range of my stand, his body frozen solid, frost covering his forehead and tines. There was no blood or visible wounds. I pulled him free of weeds and snow and knelt beside him. “Oh, buddy… What happened?” I whispered as I felt a sadness hit me in a place I thought I’d closed off for a while.

So that was my state of mind when I bumped the big nanny doe and her entourage that final, snowy night of the late bow season. After spooking them, I crawled up a frost-rimed ladder into my stand and settled in to face the northwest wind. The sun had just touched the treetops when I spotted movement to my right, a shimmering of gray shadows against white snow. I counted six deer: a mature doe and four fawns, all following a huge, horse-headed nanny surveying the field before entering. It can’t be them, I thought. But it was.

I came to full draw as the big doe stepped into the field. All I recall was the sound of my bow at the release, and the sight of the arrow arcing in flight, and the quick-running circle of the doe as she spun to sprint back toward the woods before collapsing within sight.

Minutes later I knelt over that sleek, still-warm form, my gloved hand pressed against the fur of a deer that had no business giving herself to me. “Thank you,” I whispered into her huge, all-hearing ears. Then I looked up into a star-filled December sky and just stared—watching, listening, breathing…and finally sensing, at last, a tiny part of me returning that had not been present for what seemed like a very long time.