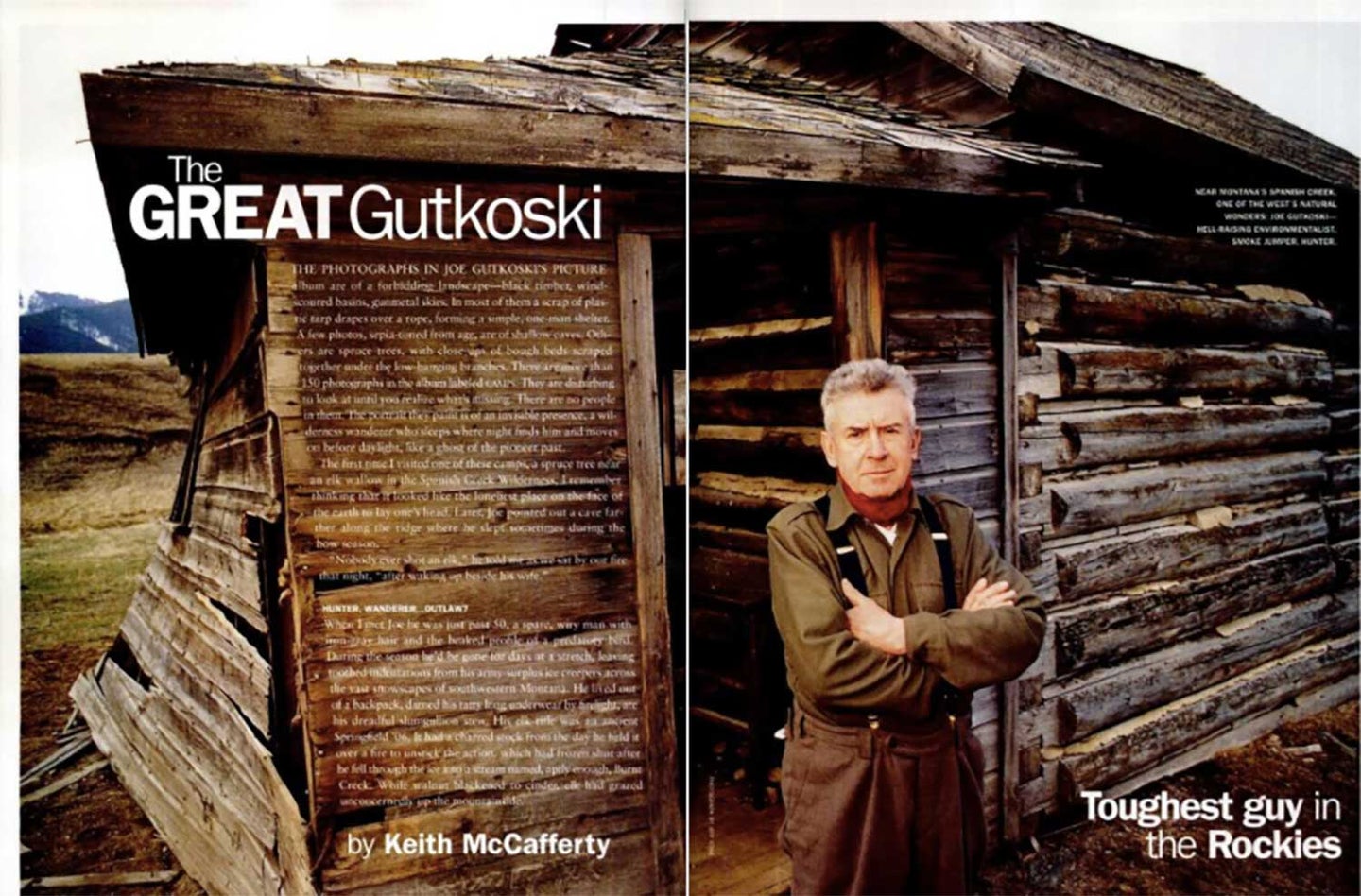 Joe Gutkoski was a friend and hunting mentor of the author’s. Field & Stream
SHARE

To celebrate the 125th anniversary of Field & Stream, we’re going to share some of our favorite stories from the history of the magazine. Every day for the rest of the year, we’ll republish a new F&S Classic on the website. Today’s entry, “The Great Gutkoski” by Keith McCafferty, was published in September 2002. You can find the complete F&S Classics series here.

The photographs in Joe Gutkoski’s picture album are of a forbidding landscape-black timber, wind-scoured basins, gunmetal skies. In most of them a scrap of plastic tarp drapes over a rope, forming a simple, one-man shelter. A few photos, sepia-toned from age, are of shallow caves. Others are spruce trees, with close-ups of bough beds scraped together under the low-hanging branches. There are more than 150 photographs in the album labeled camps. They are disturbing to look at until you realize what’s missing. There are no people in them. The portrait they paint is of an invisible presence, a wilderness wanderer who sleeps where night finds him and moves on before daylight, like a ghost of the pioneer past.

The first time I visited one of these camps, a spruce tree near an elk wallow in the Spanish Creek Wilderness, I remember thinking that it looked like the loneliest place on the face of the earth to lay one’s head. Later, Joe pointed out a cave farther along the ridge where he slept sometimes during the bow season.

“Nobody ever shot an elk,” he told me as we sat by our fire that night, “after waking up beside his wife.”

When I met Joe he was just past 50, a spare, wiry man with iron-gray hair and the beaked profile of a predatory bird. During the season he’d be gone for days at a stretch, leaving toothed indentations from his army-surplus ice creepers across the vast snowscapes of southwestern Montana. He lived out of a backpack, darned his tatty long underwear by firelight, ate his dreadful slumgullion stew. His elk rifle was an ancient Springfield ’06. It had a charred stock from the day he held it over a fire to unstick the action, which had frozen shut after he fell through the ice into a stream named, aptly enough, Burnt Creek. While walnut blackened to cinder, elk had grazed unconcernedly up the mountainside.

“What a man won’t do when it comes to elk,” he said when he caught me examining the rifle. He laughed and shook his head at his own folly. “You know it. The things a fellow has to go through to get a piece of meat.”

Venison was a sacrament to him. It was the blood thread that connected him to the native hunters he so admired, the fur-clad Shoshone who had first trod game paths through these mountains, and it was the source of protein that had sustained him as far back as he could remember.

Born into a Polish coal-mining family in Wilkes-Barre, Pennsylvania, on the eve of the Depression, he recalls watching his mother can deer meat while his father sat in a favorite chair, cutting another notch into the buttstock of a .30/30 Winchester. By the age of 12, Joe had cut the first notches in his own (figuratively speaking, for he abhors any boastful practice when it comes to the taking of life) and was running a trapline on the Five-Mile Mountain for foxes, mink, and muskrat. A solitary wanderer from the earliest age, he would disappear from home for days during school holidays, living out of a knapsack and sleeping in lice-ridden cabins on timber lands managed by the Works Project Administration.

Two incidents during this period proved to be harbingers of his future. Timber company detectives patrolled the forests, and they found great sport in chasing the skinny youngster from his hunting and trapping haunts. Sworn to revenge, Joe threw rocks at the tin roof of the cabin the detectives lived in, and when they ran outside to chase him, two of his friends ducked inside the cabin and wedged long poles underneath a potbellied woodstove. As the chimney came crashing down, the boys scuttled out the door with the stove balanced on the poles between them, “fire and all.” After that, Joe was a marked young man, but the abandoned cabin he trapped out of—one the detectives couldn’t find—was much warmer. Not only would this foresee a long and contentious relationship with authority, but the timber company’s efforts to run him out of the woods impressed upon him the importance of keeping wild lands in public hands, a philosophy that eventually led to a career in the U.S. Forest Service.

Not long after his first brush with the law, a game warden checked Joe, who had the hindquarter of an illegally killed doe in his knapsack. But this was the Depression, and after feeling the meat through the knapsack and studiously ignoring the hair and blood on the outside, the warden told the boy to go home. In fact, Joe had found the deer dead and could not stand to see an ounce of it go to waste. It was the ethic that shaped his life as a hunter as he moved westward, toward bigger game and grander landscapes, where a man might still find room to wander at will.

Taking Up a Cause

Joe Gutkoski killed his first elk in 1953, while employed as a smoke jumper out of Missoula, Montana. He was hunting grizzly bear at the time, following the track of an old boar as it headed toward the Canadian border along the North Fork of the Flathead River. Where the track veered down toward the road, Joe left it long enough to flag down a car and hand the driver a postcard to mail to a young nurse he had met in a hospital a few weeks before. The bear would eventually cross the border unscathed, and in time Joe married the nurse, but the 6-point bull elk he found along the grizzly’s trail did not live to see another spring.

With the birth of the first of the couple’s three children and the leanness of Montana winters, with no fire-fighting income until April, procuring elk meat assumed greater importance. No longer was a venison dinner just a fringe benefit of hunting bears. Early every December, Joe would make a pilgrimage to scatter seeds under the sacred medicine tree of the Salish and Kootenai tribes, up on the East Fork of the Bitterroot River. With the blessing of the hunting gods, he would backpack into the wilderness. It was here that he developed his distinctive hunting style of following a trail for days, for elk were scarce in those years and if a hunter left one track, a week might pass before he found another.

It was also about this time, as Joe flew on fire-fighting missions across the West, that he took notice of the accelerating devastation of the forests wrought by clear-cutting. His vow to fight for wilderness designation for some of the last unroaded land would eventually bring him recognition among environmentalists. It also earned him more than a few enemies during his career as a landscape architect with the U.S. Forest Service, whose bosses were adamant advocates of development. Were it not for his unflagging efforts to keep the land intact, many acres of Montana’s best elk hunting country would have long ago been rendered into slash piles and mining sluices.

Although he has killed his share of 6-point bulls and once guided his son to a Goliath elk that made the state record book, Joe is a meat hunter first. He prefers his elk “fat and fluffy,” not run tough and ragged by the rut. Brushheads and spikes are his bread-and-butter elk, cows and calves, better yet.

For a wedding present, he gave me the bleached skull and rack of a 5-point bull he had killed after tracking it for three days through the Gallatin Range, sleeping in the beds it made on the mountainside. He is the finest woodsman I have ever known.

In the mid-1990s, it seemed, the years and the wilderness started to take their toll. One fall, Joe backpacked in for 23 days and came out, 10 pounds lighter, without having ever shouldered his rifle. Another year he had a bull broadside at 20 yards, but couldn’t muster the strength to draw his bow. Chronically in pain from an old mountain-climbing injury, he found it increasingly difficult to sleep on the ground and would spend long nights sitting alone by a fire.

“This getting old is hell,” he said to me once, when I peeked outside our tarp to see him building up the fire.

He told me he’d better begin showing me where the secret camps were, so I could inherit them before he became too frittered away to climb. I gave him some of my elk to tide him over the lean winters and was naive enough to believe that the torch had been passed. Then, five years ago, on a wintry November night, he came to my door smelling of wood smoke and mountain cold. He had just spent the weekend backpacking bags of wet elk out of the Sentinel Fork of Moose Creek and was wondering if I needed a slice of liver.

But he’s been making me the same offer every year since, and just last fall, I came across him on a ridgeline of whitebark pines, the gleaming ribbon of the river next to which he had parked his truck winding in and out of sight more than 4,000 feet below. The old mountain man was bent forward at the waist, rubbing the top of his head across a tree bole where a bull elk had scraped his antlers. When I asked what he was doing, he said he was scent marking his territory.

I doubt that I will be shivering in his caves or adding boughs to his spruce-tree beds any time soon.