FS Classics: Tobacco on the Water 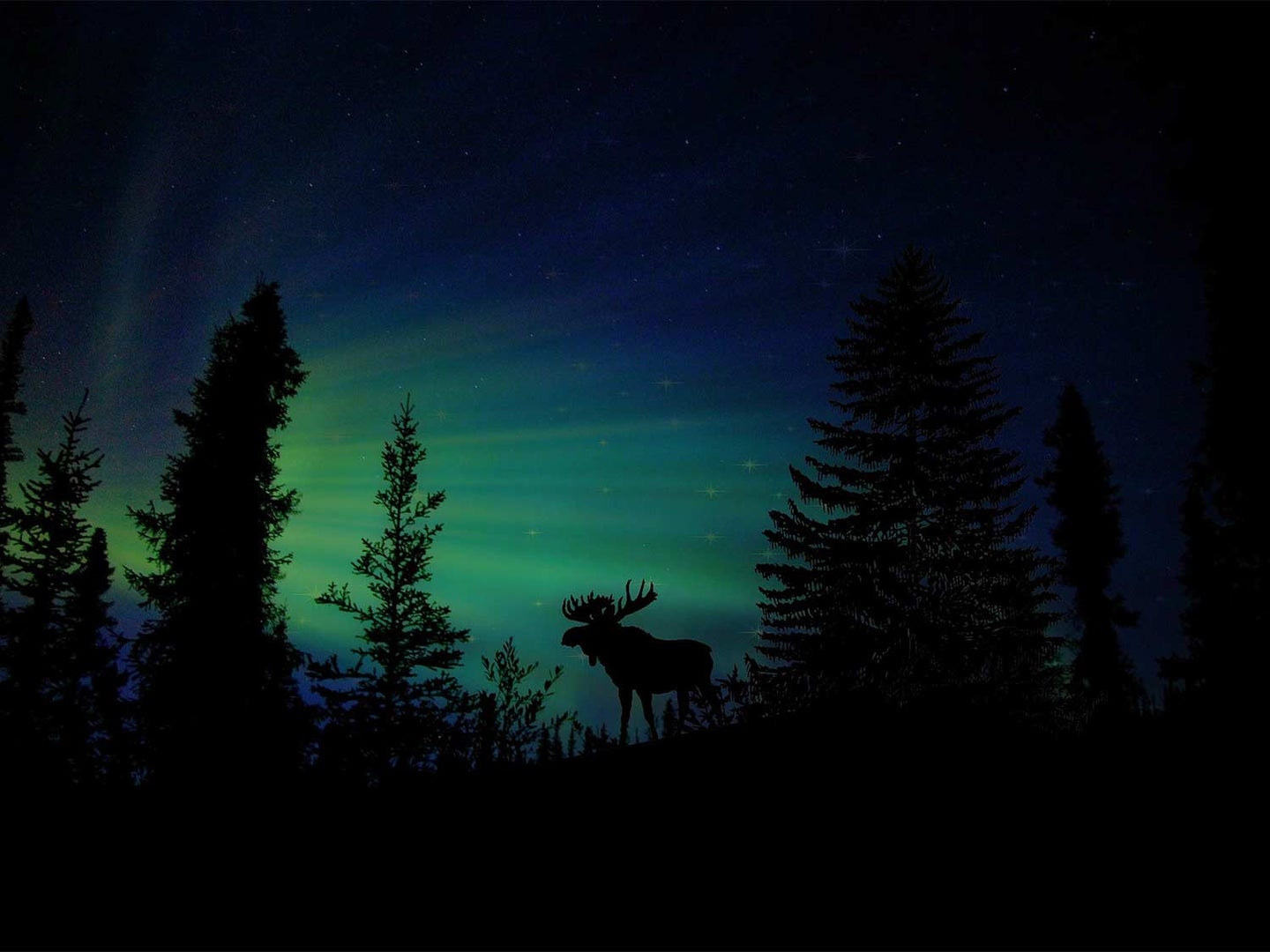 A bull moose and the Aurora Borealis—two icons of the North County. cocoparisienne/Pixabay
SHARE

To celebrate the 125th anniversary of Field & Stream, we’re going to share some of our favorite stories from the history of the magazine. Every day for the rest of the year, we’ll republish a new F&S Classic on the website. Today’s entry, “Tobacco on the Water” by Jerome B. Robinson, was published in September 2000. You can find the complete F&S Classics series here .

Bozo left the beach and plunged into the willows at the edge of the floodplain. Splayed tracks, bigger than dinner plates, marked the trail paralleling the river. “Big-man moose walk here,” Bozo said respectfully. “Grandfather moose. Horns like this.” He spread his arms wide above his head.

Jim Henry, Alfred Balch, and I had joined Bozo and his brothers to hunt moose on their ancestral hunting grounds in the Port Cartier Reserve, north of the Gulf of St. Lawrence in eastern Quebec. The St. Onges are French-speaking Montagnais Indians, who guide one party of moose hunters each September.

Lucien St. Onge took a pouch of Player’s Navy Cut tobacco from the pocket of a canvas coat embroidered with animal pictures. “Tobacco is strong medicine for moose hunting,” he explained. “Each day, spread some tobacco on the land, spread some on the water. Thank the Great Spirit for the mountains and the lakes and the rivers and the forest and all the animals and fish. Spread more tobacco, and say you know the Great Spirit has lots of moose. Say, if He can spare one moose, please send it to you. Spread more tobacco. Very good medicine.”

Lucien passed the tobacco, and each of us spread some on the land and water and said the words. He was pleased. He smiled at us and said, “Maybe Great Spirit will send you a moose.”

Paul Blacksmith sat on a log at the edge of the water, fashioning a moose call out of white birch bark. He formed the bark into a funnel tapering from a 1-inch hole at one end to a 6-inch opening at the other. He bound it with duct tape and turned it to dry in the smoke of our lunch fire.

When the call was done he grunted through it, “Errunnh.” The sound echoed across the water. Paul listened and nodded. “Good,” he said, then helped himself to a bowl of eider duck soup from the pot on the fire, a slab of bannock, and a mug of warm tea.

“Is that the best moose call?” I asked.

“Not for me,” Homer St. Onge chirped in. “Paul does it the old way, but I’m a New Age Indian. I call moose with a chain saw. I go on the lake when it’s still,” he explained, “pull the chain-saw starting rope. Purrrrr. Pull again and the saw starts. Squeeze the gas. Rrrrrrrhh. Shut it off. That’s it. Moose hear that. From far away it sounds like a woman moose calling for love.”

Then Alfred got out his moose call. It was a Maxwell House coffee can with a dampened skate lace dangling through a hole in the bottom. He pinched the skate lace between his forefinger and thumbnail and pulled. It made a moaning sound, something like a lovesick cow.

“I call that the Maxwell House Moan,” he said. “Good moose call.”

But the calls did no good. All the next day rain fell, and the moose sheltered up in the forest.

“We’d better tell the Great Spirit a 50-inch bull would be okay,” Jim said, as we spread tobacco on the water the third morning. “We don’t want to seem greedy.” We patrolled the length of the lake, some 18 miles, and checked for sign. Moose tracks were everywhere, but most were several days old.

“Moose not moving now,” Paul said. “Too warm.” We called anyway, whenever we found a place that overlooked a big swamp or an expanse of shoreline. Twice we saw cows with calves, but no bulls trailed them. It was so still we could hear ducks splashing from a mile away. Once we heard the lonesome howl of a timber wolf, but no moose spoke.

“We really don’t need a big-man moose,” said Alfred, looking skyward as he spread tobacco at dawn on the fourth morning. “If you can spare a nice 35- or 40-incher, fine.”

The Indians were not dismayed by the lack of moose. They knew that in time the weather would turn colder, triggering the breeding season. Then the bulls would listen for the voices of lovesick cows and would come grunting to the call. It was only a matter of time, but our time was running out.

That night the skies cleared, and the wind pushed brisk waves down the lake. Overhead, northern lights flickered, ribbons of green and pink that shimmered through the heavens. We stood with the St. Onges on the lakeshore and watched the display. Love lights in the sky, Bozo called them, turning up his collar against the cold wind. “Tonight, the moose will walk.”

Then Lucien turned to us and said, “We move in the morning. Take the big tent and move north in the canoes to the end of the lake. Hunt on the river in a big valley where there are lots of moose.”

By noon the next day we had completed the journey. We erected the canvas wall tent in the woods beside a sandy beach at the north end of the lake. The St. Onges laid a deep bed of fir boughs in the tent, and we stacked firewood behind the stove. “Now we go watch,” Bozo said. “Later we call.”

We canoed up the river for a mile or so, then climbed a granite outcrop that gave us a broad view of the country. The river wound down from the north through a wide valley with open patches where ancient oxbows now grew thick with grass. We could see beaches crisscrossed with fresh moose tracks at every river bend.

At three o’clock Paul called. He called again at four, five, and six; but no moose stirred. As shooting light faded to darkness, we returned to the canoes and paddled back to camp. “Tomorrow,” said Homer St. Onge. “Tomorrow is the day.”

“We still holding out for a big one?” Jim inquired the next morning.

As we spread the tobacco, Alfred said, “We don’t need a trophy bull. You can’t eat horns, anyway.”

By late morning we had motored several miles up the river. Now we drifted slowly downstream with the motor shut off, calling occasionally in the hope of getting an answer or encountering a bull on the riverbank.

When the bull appeared, he trotted toward the canoe as if he had an appointment with us. He wasn’t the trophy we had imagined. But he was stout, the kind of animal most prized by the Indians, who shoot for meat, not self-esteem. Jim raised his rifle and dropped the bull.

When we approached the dead moose, Bozo knelt and put his hand on its head. “Thank you for your life,” he said.

Then Lucien said, “Perfect moose for eating. Nothing better. When a hunt ends well, we spread tobacco to show we are grateful.” And once again we passed the pouch and sprinkled tobacco on the land and water.