March is the perfect time to hang some of your best treestands for the fall deer hunting season. Here how to do it right 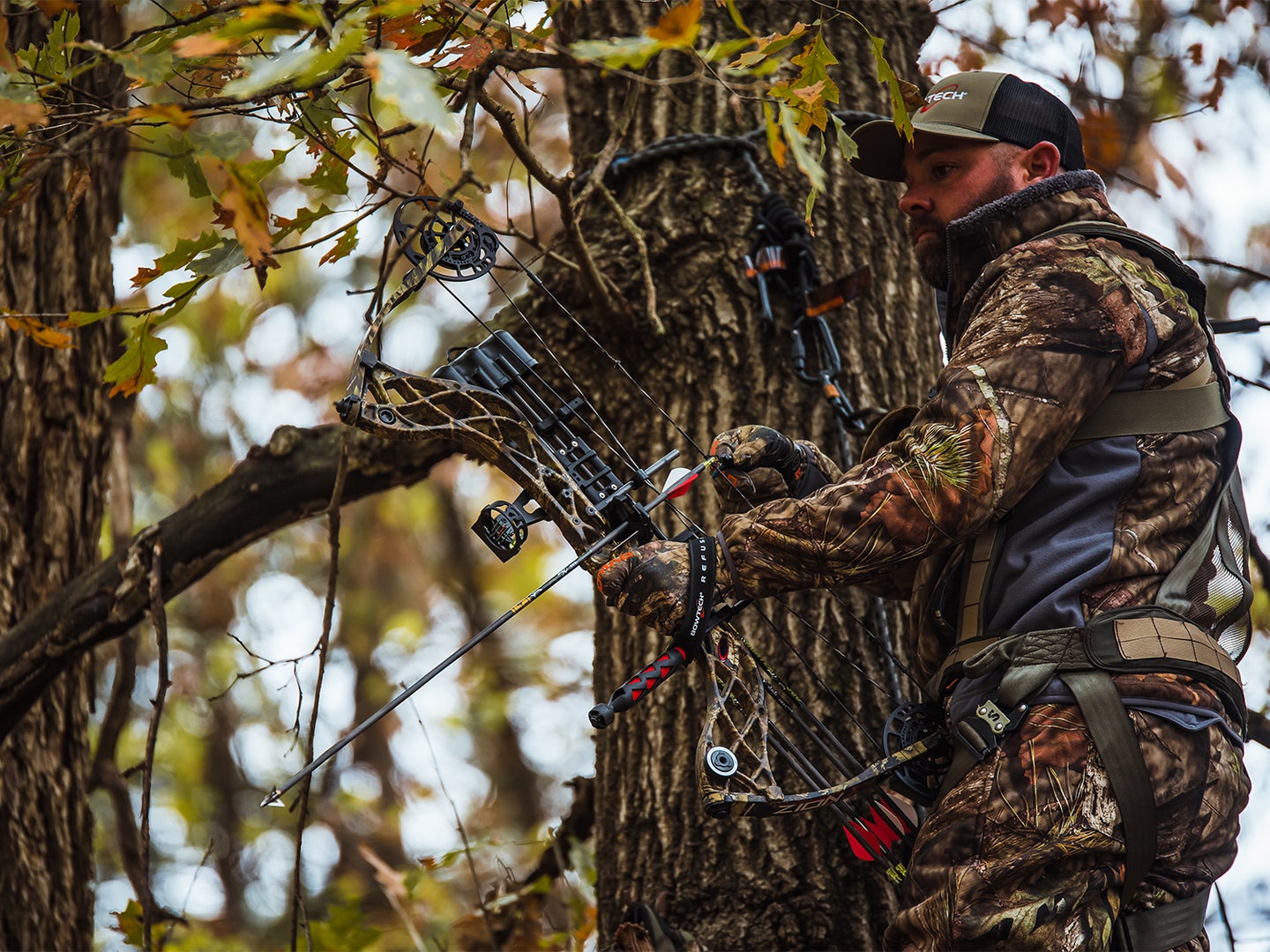 You’ll have more time to hunt in the fall if you hang stands now. Bowtech Archery
SHARE

The buck had been a regular on the ridgetop beanfield all summer, but with a week to go before the archery opener, he vanished. I spent several evenings glassing the corner where the tall-racked 10 had made daylight visits, hoping he’d return. But he never did. Suddenly, tagging the buck had gone from a high-odds bet to a huge question mark.

I almost gave up on the deer, convinced I should wait for the late pre-rut to go after him. But then I thought of the previous spring. Back in March, I’d scouted the area just off that beanfield corner and found a perfect hub on a flat where three ridges joined. Even better, the flat hosted several white oaks and was littered with scrapes and rubs still visible from the fall. It was a perfect staging area. I hung and stand and brushed shooting lanes, and had just pretty much forgotten about it—until now.

I realized that the big 10 mostly likely hadn’t abandoned the core area where he’d felt comfy all summer. Instead, he was simply delaying his visits to the beanfield until dark. So I waited for the right wind, snuck in to my pre-hung stand three hours before dusk, and settled in to wait. With 40 minutes of legal shooting light remaining, I heard a scuff in the leaves and craned my neck. The monster 10 was already in bow range when I spotted him, and a few minutes later he was crashing off with my arrow in his ribs.

Why You Should Hang Treestands In March

While that stand was memorable, it was not exceptional. Some of the best treestand sets I’ve hung in my 40-plus years of bowhunting have been put up in the narrow window between snow-melt and green-up. The reasons are pretty straightforward. All of last fall’s deer sign is still present and largely unchanged, and I can scout that sign with zero fear of affecting a buck’s pattern. October’s rubs and November’s scrapes may look a little tarnished, but they’re easily visible and open to interpretation. And those trails that lead through funnels and link bedding areas and food sources and, yes, staging areas, are as easy to read as ever.

The difference between scouting those spots now rather than during hunting season is that I can take the time to decipher rub lines, nail down scrape behavior, and walk out trails—even when they lead to bedding areas. Doing so during fall might be disastrous, but bombing through a buck’s sanctuary now is nearly failsafe. Even if you bump a buck, he has months to forget your intrusion. I can also take my time hanging and brushing out stands now, knowing that I’m not missing any hunting time. In short, you can literally hang your best stand of the fall right now. Here’s how to pull it off.

I’ve killed a number of great bucks by setting up over red-hot sign, from the September opener to the last ticks of the late season. But those are not the spots you’re looking for now. Instead, you’re searching out terrain funnels and cover types that will remain relatively consistent and will be used in the same manner by deer from year to year. Food source changes can affect these areas slightly, but not in a great way, since you’re relying on how a deer will move through the landscape, not what is controlling his belly.

A hub like the one where I arrowed that big 10 is one good example of a setup that will remain attractive to deer no matter what, as the convergence of three spine ridges will funnel deer in much the same way from year to year. Other funnels that produce consistently are ridge saddles (hogsbacks), benches, creek or fence crossings, beaver ponds, lake-and-river edges, and brushy fence lines in farm country. A funnel doesn’t have to have food or buck sign nearby to be productive, but if it does, you can start looking for the perfect tree to put your stand in now.

In addition to funnels, this is a perfect time to set any stand in or near a bedding area. Hanging a stand in these sites during the hunting season is apt to bump your buck, so now is the perfect time to set the trap. In my country, one of the best bedding-area setups is at the end of a long, timbered ridge. I don’t mind the clatter and fuss involved in hauling a stand and gear up one one of these steep hills, because I know that after my half-day ruckus, I won’t return until conditions are right during late October and early November. Plenty of time for a buck to forget all about the intrusion.

Take Your Time and Hang the Perfect Stand

Hang-and-hunts are a vital part of my game plan every fall, but I’m often settling for a less-than-perfect tree that I can get into in a hurry. In the spring, I’ve got time to scratch my head, wander in circles, and talk to myself until I’ve chosen the perfect tree. My selection process goes in descending order of importance, like this:

While most of my setups are hang-ons, ladder stands are growing in popularity, and for good reason: they’re safe, stable, and relatively easy to climb. They are not, however, easy to erect, which makes now the perfect time to get them installed. Enlist a crew to help you, which is always a good idea when putting up a ladder stand, and take the time to do the job safely, and right.

Make Sure You Have Good Shooting Lanes

Anyone who’s hunted with me knows I’m all about shooting lanes. (What’s the point of hanging a stand if you can’t kill anything from it?) Now is the time to do the job right. While I might be quiet and careful when hanging sets during the season, now I’m as likely to tote a chainsaw as I am muscle-driven saws and clippers. For one thing, the noise is obviously not an issue, but more important, the big saw just does a more thorough and faster job.

Thorough brushing is important now because stands you hang in the spring are often going to be there for several years. While I don’t mind pulling a stand at the end of each season to make sure straps don’t rot and tree growth isn’t affected, I can save a lot of future brushing time by doing a good job on the first trip. If there’s a sapling threatening to close up a shooting lane, I’d rather eliminate the tree instead of clipping one branch this year and three the next. (Make sure you have permission if it’s not your property.)

Another great aspect of stand-hanging now is I get a perfect look at how well the setup is (or isn’t) camouflaged, as the canopy looks much the same in March as it will next November. If I fear I’ll be sky-lighted in the tree, I can add cover. This obviously an option on an in-season setup, but I can do a better, more thorough job now.

You’re not done after you hang and brush a spring set. Take some time to figure out how you’re going to access it, and do the work now to make getting in and out easier in the fall. One of my favorite ridge-end bedding setups has to be accessed by scaling a steep hillside covered by a thicket of red cedar. I literally had to cut a tunnel through the growth, then mark it with bright eyes and reflective tape. Creating that path took me twice as long as it did to hang the stand it led to, but the process was worth it. Though it involves some huffing and puffing, I can access that stand in virtual silence, in the dark, and never alert a deer.

Not all setups will require such exhaustive path-carving, but I may need to decipher how to cross a creek, where to slip along a fencerow, and which wind direction is right for hunting a bedding spot. All these decisions can be made now, with extra time and thought on my side. The only downside to hanging stands in March is that you might half-forget about one or two of them by the time the hunting season rolls around. On the other hand, you might remember one, like I did, just in time to kill one of your best bucks ever.