How to Hunt Deer in the Worst Winter Weather

Your last, best chance to fill a buck tag is when the weather is at its worst 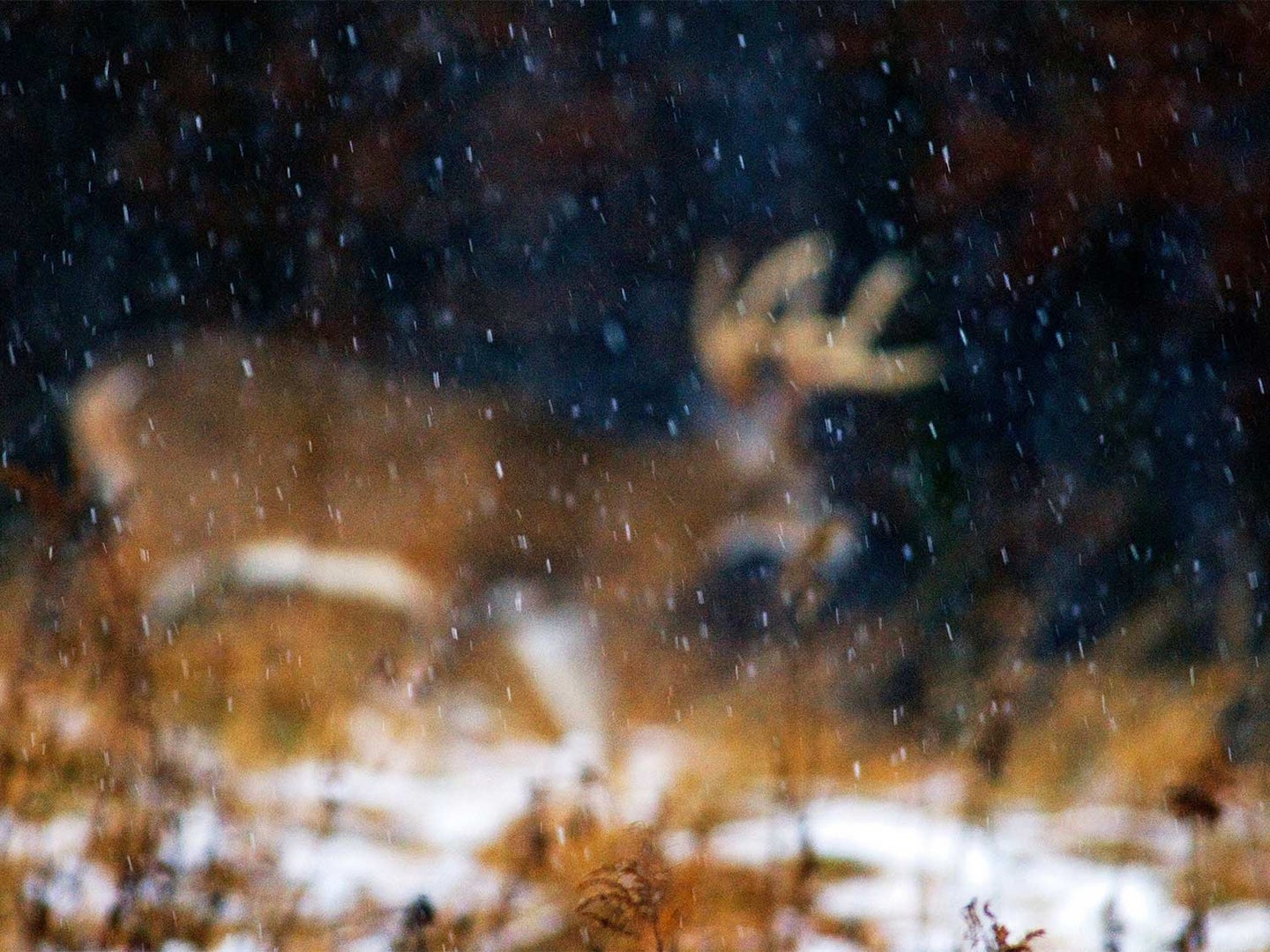 I had a whole list of reasons to stay in my truck, but the icicles alone were enough. Swinging and rattling from the power line outside, they seemed the very teeth of the wind itself. That wind-referred to by the TV meteorologist as an “Alberta Clipper”-had come on the heels of a storm that brought first snow, then ice, to much of Minnesota. As I glassed from the comfort of the truck cab, the glazed fields shimmered and glared and sun dogs hovered in the cobalt sky. Three days before Christmas and the landscape resembled a moonscape more than a holiday greeting card.

But I got off my seat and into the cold. I’d seen the buck the day before, pawing the ice-crusted field a quarter mile from the road. He dwarfed the pair of does that fed near him, his bobbing antlers resembling a hay rake. I’d watched the deer for 10 minutes before they looked my way, spotted the truck, and promptly filed off the field.

With less than a week left to fill my archery tag, waiting for conditions to moderate was not an option. So I pushed open the door and slipped and slid to the tailgate, where I wriggled into a Carhartt coverall and strapped on a pair of snowshoes. Pointing my face into the wind, I made my way to the field.

What had looked like wind-driven pressure ridges from the road were, instead, heaps of snow tossed aside by hungry deer. Beneath their plowings was a salad bar of lush alfalfa. Droppings and urine littered the feeding sign, hinting that dozens of whitetails made this a nightly destination. Simply seeing deer here would be a slam-dunk. Killing one—especially that particular buck—would be a challenge.

The iced-over snow was a big problem, as it prevented me from getting quietly into a stand tree. But tonight was only part one of my plan. Using my bearpaws to crack the crust and tamp the snow, I made a walking path to an oak tree growing within bowshot of a major trail. Busting that path produced as much noise as I’d ever made in the deer woods. Any whitetails bedded nearby had surely changed their dining plans for the evening. I tromped back to the truck and drove home, vowing to wait at least two days for things to settle down. It was a desperate measure and one I’d taken only because I was, well, desperate. But I also knew just how good winter deer hunting can be, especially for mature bucks. Outside the narrow window of the rut, late season (where archery and/or blackpowder seasons last through December in many states, and all or parts of January in others) is one of the best times to bag a trophy whitetail. I’ve proved this to myself virtually every year an empty tag forces me into a winter deer stand; my journals indicate my mature-buck sightings in December equal those in my November hunts.

The Key to Hunting Late-Season Deer

The reason, of course, is food. If a mature December buck with fat reserves worn thin by chasing and breeding does a month earlier doesn’t take on enough calories, he won’t last the winter.

No one knows this better than my friend Don Kisky, a southern Iowa farmer who, with his wife, Kandi, has tagged dozens of trophy whitetails. More than a third of those monsters, including several bucks they couldn’t harvest in any other season, were taken near winter corn, soybean, or milo fields. “I love the rut as much as anybody,” Kisky says. “But I know if I don’t get lucky then, I’m going to get a second chance a month later if the weather is right.”

Right, in this case, means nasty cold and deep snow. “The snow’s more important,” he says. “An inch is good, a foot is better, ice on top of that foot is the ultimate. Difficult travel gets deer serious about eating. Every winter I pull deer into my food plots from a mile or more. Last winter I watched 125 deer kicking up snow in one of my beanfields to fill their bellies.”

Farm country isn’t the only show in the late season. In the heavily forested regions of the extreme north, winter food is even a higher priority for deer, as snow depths and temperatures are frequently more severe. Lacking waste grains or standing crops, big-woods deer are restricted to naturally occurring food sources like browse or mast crops. Northern whitetails also cluster in sheltered “yards” like conifer swamps, lowland bogs, and riverbottoms. In such a wintering area, temperatures may be 10 to 20 degrees warmer—and the winds significantly lighter—than on a hardwood ridge only a few hundred yards away.

John Spiegl is a northern Wisconsin trophy hunter who, like Kisky, has killed a significant portion of his big whitetails as they visited late-season food sources. “Acorns are probably the best draw,” Spiegl says. “I’ve killed several nice bucks in December as they moved from a lowland bedding area to an oak ridge to feed. It doesn’t take a huge stand of oaks to pull deer in; sometimes a ridge with four or five trees will do it.” In seasons when the oaks don’t produce, Spiegl may focus on recent aspen clear-cuts, where winter whitetails gather to browse on tender buds, or on ongoing logging operations.

How to Ambush a Winter Buck

Snow makes late-season deer sign easy to read. But once scouting reveals a winter hotspot, the cakewalk ends. Remember, these animals have run a gauntlet of hunting pressure that began in early fall and built to a crescendo throughout November. Always sensitive to human intrusion, winter whitetails are as paranoid as they are hungry.

“You can’t underestimate their caution then, especially if you’re dealing with an old buck,” Kisky says. “He may have lost 70 pounds rutting, and he may die if he doesn’t get some of it back. But he’d rather starve than expose himself to danger.” Kisky is mostly exaggerating here, but the point remains: Spook a buck near a food source only once, he figures, and the deer will either find other feed or revisit the spot only at night. “If I don’t kill him on the first setup, I figure things just got a whole lot tougher.”

The remedy is avoiding the temptation to rush in. Kisky may spend four days glassing a field from a distance before attempting an ambush. Set up on a distant vantage point, he will watch not only for feeding deer but for potential stand trees as well. In the process, he will determine the best wind to hunt the field, plus an exit route from his stand that will get him back to the truck without spooking deer. “I’ll take the back of a ridge, a creek bed, or a ditch out of there. It may be half a mile, but I follow it no matter how cold or tired I am. The only alternative is to have a buddy drive out to the field to pick you up. That spooks deer just long enough for you to get the heck out of there.”

The dense cover of the north woods doesn’t allow Spiegl to glass deer. He relies on sign and common sense to score. “Scouting tells me where the bedding areas are, and I plan a route to my stand so I won’t be seen, smelled, or heard by deer,” he says. “They bed close to food then, and you’ve got to set up without alerting them. And I never sit in a spot unless the wind is perfect. Never. If it’s right when I get there and changes when I’m sitting, I just get down and walk out. A lot of guys stick in there and pray they’ll get lucky. They rarely do.”

My remote Minnesota field was nearly 300 miles north of Don Kisky’s farm, and about the same distance south of John Spiegl’s big woods, but the tactics of both men were on my mind when I returned. Dressed in light layers, I left my pickup with a pack full of warm clothes on my back, my bow in one hand, and a treestand in the other. Following the path I’d blazed earlier with snowshoes, I waddled until I broke a sweat, then paused for a rest before moving again. The wind, slightly calmer than two days ago but no less frigid, cooled me quickly. By the time I’d plodded to my oak, the sun was two hours from setting—plenty of time for me to freeze solid.

The first whitetails hit the field soon after. Two does and five fawns waltzed right past my tree. Then a small buck entered opposite me, and a half-racked 2-year-old was just, suddenly, there. While I watched him, the big dog appeared right behind a doe that entered the field 50 yards away, a full hour before sunset. When the mammoth 10-point shouldered into the herd, other deer skittered off. Once the buck settled into the alfalfa, he barely moved his feet for 30 minutes.

The perfect ending to the tale would include the buck feeding within bow range, a well-executed shot, and a crimson blood trail leading to a last-minute trophy. The coyotes spoiled it. They appeared just as the sun touched the western treetops, three blond-phase animals whose long legs carried them into the feeding herd in an explosion of powder. I cursed them at first, but as they chased a small fawn into the woods, I felt a begrudging kinship. Like me, they knew where the deer hunting was good come winter.