The Most Effective Two-Hunter Tactics for Spring Turkeys

How to buddy up and punch your gobbler tag this spring 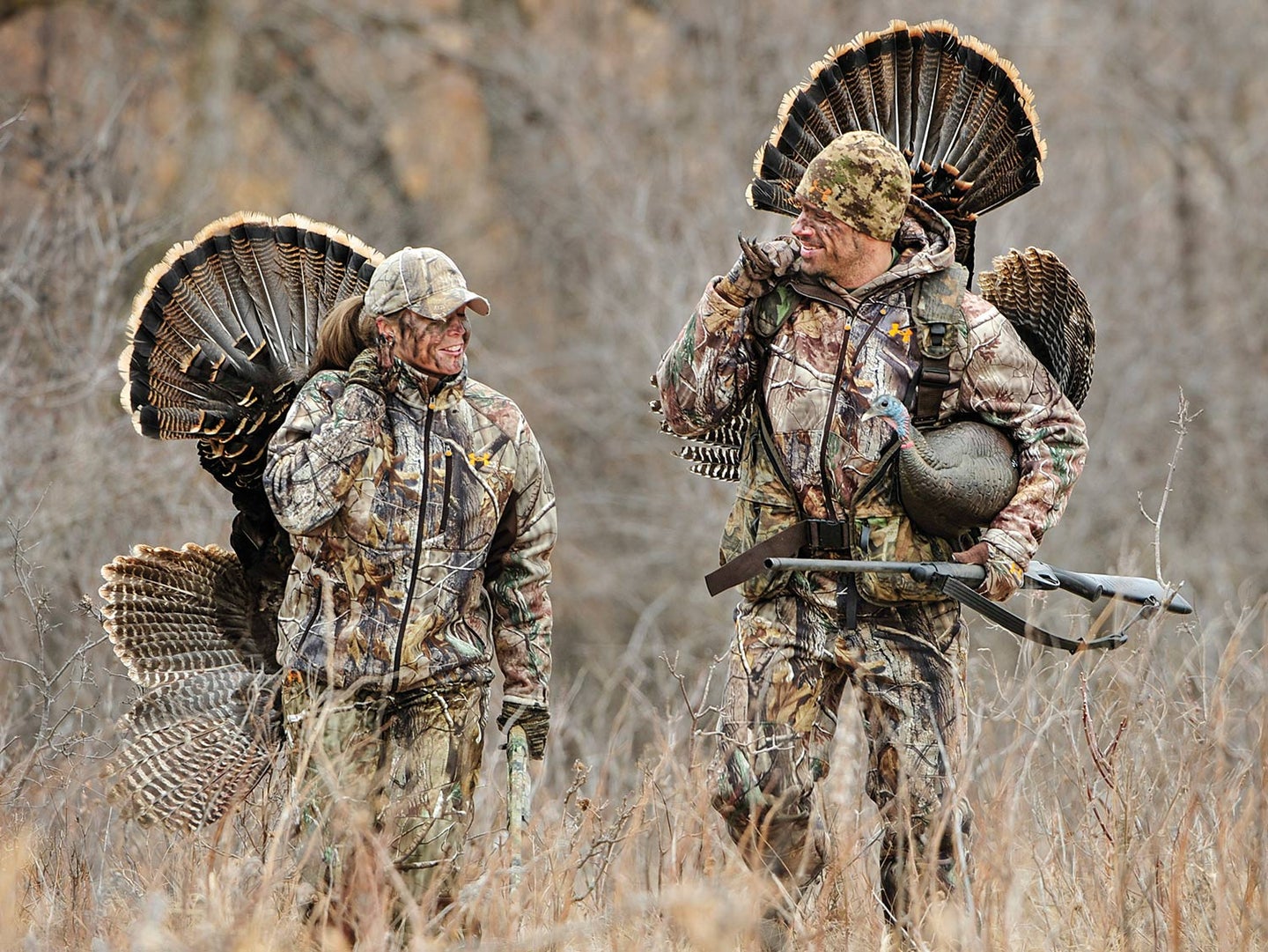 South Dakota hunters walk out of a riverbottom with a pair of gobblers slung over their shoulders. lee thomas kjos/the raw spirit
SHARE

Dave Hurteau and I belly-crawled to the ridge crest, where we could finally see the gobbler. He was 150 yards below, strutting under a cottonwood tree with a dozen hens. “What we need to do is fall back, sneak up that creek bed, and show him a fan,” I whispered.

“Nah,” Hurteau said. “We need to circle out that way and get ahead of him.”

“He’s standing in the shade, Dave. Let’s just go to him.”

“We’ve already chased him for 4 miles. Let’s cut him off.”

We glared at one another. This was our first time hunting together, and I’d already listened to him—a Yankee and a proud cat owner—run a mouth call better than me. I wasn’t letting him have this too. This was a ditch-­slipping turkey. My kind of turkey. I just needed to be diplomatic about it. When we’re not turkey hunting, Hurteau is a good friend—and besides that, he’s the executive editor of this magazine.

“Dave, we’ll never kill this bird by circling around him.”

He crossed his arms and huffed. “We obviously have to decide who’s in charge here, Brantley.” But then he laughed, and I knew we were going down the ditch. I showed the tom that fan, and Hurteau shot him at 30 yards.

It is true, in certain cases, that putting two good turkey hunters together can create dysfunction rivaled only by Congress. On the other hand, if you’re willing to work across the aisle a little, you can become an unstoppable gobbler-killing duo. Hurteau and I filled all four of our tags on that Nebraska hunt and helped some other friends tag out too.

Teaming up can help in plenty of turkey-hunting situations. But when it comes to fooling the toughest toms, like in the three scenarios that follow, working with a friend you trust is often the best way to get it done. Even if that buddy does keep cats.

Scenario No. 1: The Early-Season Hang-Up

You and your buddy have been scouting a flock of turkeys coming to the same field every day during the week before the opener. There’s a tom, a few jakes, and a dozen hens, and they always wind up in the northeast corner of the field after fly-down. So, you’re waiting there in a ground blind with a jake and three hen decoys at first light. Slam dunk, right?

Except the turkeys don’t follow the script. Instead, they pitch into the field, stand out of range, and stare at your spread for a while, ignoring your calls. Then they walk the other way.

Before you do anything, make absolutely sure the turkeys are gone, and make a note of where they exited the field. Don’t risk spooking them by leaving too soon. You can spend the downtime chastising your friend. I mean, the blind was his stupid idea, right?

Why didn’t they come in? Maybe the hens pulled the gobbler away because that’s what they do. Or maybe that gobbler is tired of fighting jakes. Most likely, they got a little suspicious of your motionless spread and didn’t come to it. But they do like this field—and particularly this corner. You need to try again at first light tomorrow.

And you need to split up. One of you should set up at the corner, but this time without decoys. And no blind. Most people think turkeys aren’t spooked by blinds, and it’s usually true. But I’ve watched turkeys avoid them often enough to know that sometimes it’s better to tuck into the shadows and sit still.

Meanwhile, the other hunter needs to make a move. As likely as those birds are to come back to the corner, they’re also apt to follow the same route out of the field as they did yesterday. So grab the jake decoy and set up as tight to that exit as possible. Keep the calling to a minimum until it looks like the turkeys are leaving the field. Then pour it on. If you’re close enough to be in the tom’s bubble on a route he’s walking anyway, he’ll come in for a look. One of you is going to bag that tom. You just have to decide who sits where.

My wife, Michelle, and I knew we didn’t want our 4-year-old son, Anse, to experience his first turkey hunt stuck inside a ground blind. He wasn’t ready to shoot, but he wanted to go. So Michelle bought an inexpensive green, child-size sleeping bag. I told Anse to get in it and roll all around in the mud, so as to stain away the shine. He did a great job at that. I carried the bag in my vest, and whenever we set up on a tom, Anse would wiggle into the bag and sit between my knees. He was warm, could see and hear every­thing, and his little pointing hands stayed covered. We had two close calls this way last year, and I’m confident he’ll see me shoot a gobbler this spring.

Scenario No. 2: The Property-Line Strutter

You and your partner have been hearing a gobbler since daylight, and you finally spot him, puffed up in a cattle pasture with a hen. Problem is, it’s the neighbor’s pasture, where you don’t have permission to hunt. To kill that tom, you need to coax him back over to your ground.

First, identify a spot along the property line where the gobbler can clearly see both sides and easily cross over. If there’s a fence, look for a opening or an unobstructed spot where a dip in the terrain provides a little extra space for a tom to slip under.

Now, both you and your buddy need to belly-crawl to within shooting range of the line, or as close as possible, without being seen. If your buddy is the shooter, he’ll stay put, lying prone, shotgun on the ground pointing safely to the side.

You crawl slightly ahead of him and slowly raise a reaper decoy into view. Gently spin it left and right to simulate a pirouetting strutter. Now start crawling closer to the property line. If the gobbler stays in strut and his head is white, your odds of getting him are good. Signal to your buddy to start calling—fighting purrs are best—and you keep that decoy moving like a real bird. When the tom breaks and starts moving toward you, move up to the property line and use the decoy to steer the tom to where you want him to cross. Chances are he’ll make slow, steady progress. When he gets to within 50 yards or so, start inching back toward your buddy.

Keep the fan between you and the bird, and when you’re just ahead of your partner, stake the decoy in the ground and keep crawling back until you’re behind him. Now he can go for his gun. Once the tom is on your side, shoot him quick because he’s either going to figure out your game or charge in and spur you both in the face.

Tip for Two: Make It a Double

You and your buddy have two gobblers at 25 yards—and two guns, safeties off. What’s the best play? Well, the old “3, 2, 1, shoot!” can work, but it often doesn’t. On the other hand, if the second shooter can keep his head, there’ll be an easy second-shot opportunity most of the time. If you’re really lucky, it’ll be while gobbler No. 2 is coming in to flog his flopping buddy. Even if he isn’t, spooked birds will usually run straight away for 10 yards or so before taking flight. It’s an easy shot if you’re expecting it.

Scenario No. 3 The Ridge Runner

It’s the late season, and you’ve been on a hard-gobbling timber bird since daylight. You’re within 100 yards of him and on the same ridge, but he’s at least 50 yards above you, along the crest. You’re able to call him to the edge easily enough, but he refuses to step over and come down to you. You’ve yet to see him.

Everybody’s buddy calls too much, so this may be tough, but you need to give this tom the silent treatment for a half-hour or more so that he’ll drift away from the edge of the ridge. Ideally, he’ll sound off on his own and confirm that he’s backed off.

Then it’s time to make your move, but here’s the key: You need to sound like a turkey while you’re doing it. When a real bird scratches in the leaves, it sweeps the duff away with one foot and then the other, in a loose V pattern. This makes a two-note swish, swish sound, followed by silence as the bird pecks at whatever goodies have been uncovered. If you can cluck and purr on a mouth call, do it as you sneak. A double-reed ghost cut is perfect for this.

Crawl on your elbows, and imagine them being like turkey feet. Swish, swish, stop. Cluck. Purr. Repeat. Pick out a large-trunked tree ahead of you, and keep it between you and where you last heard the bird. You want to crawl far enough that you can see and shoot to the edge of the ridge crest. Once you get there, motion to your buddy back at the original position. Now he can go ahead and have at it with his favorite call to get that bird to gobble. If the tom sounds off within 50 yards of you, pull yourself carefully into a shooting position and get ready. This time, when he comes to the edge of the break, you’re going to fill your tag. And don’t forget to thank your friend.

Tip for Two: Get the Shot

Want to film your next turkey hunt? The surest way to get good footage is to team up with a buddy, stake a decoy spread 20 yards out, and film over your partner’s shoulder from about 5 feet away. A camcorder on a tripod, especially one with a touch-focus viewfinder, is best. Drape the whole thing in artillery netting. Keep the frame wide, with your buddy’s shoulder in the lower third, as the tom is approaching, and then gradually zoom in once the bird is in the decoys. Focus on the gobbler’s head. When you’re happy with the scene, get your hands away from the tripod so you don’t bump it at the blast. Double-check that the camera is rolling, and then call your buddy’s shot.