How to step up your scouting, create better decoy spreads, and make the right calls for the season’s wariest honkers 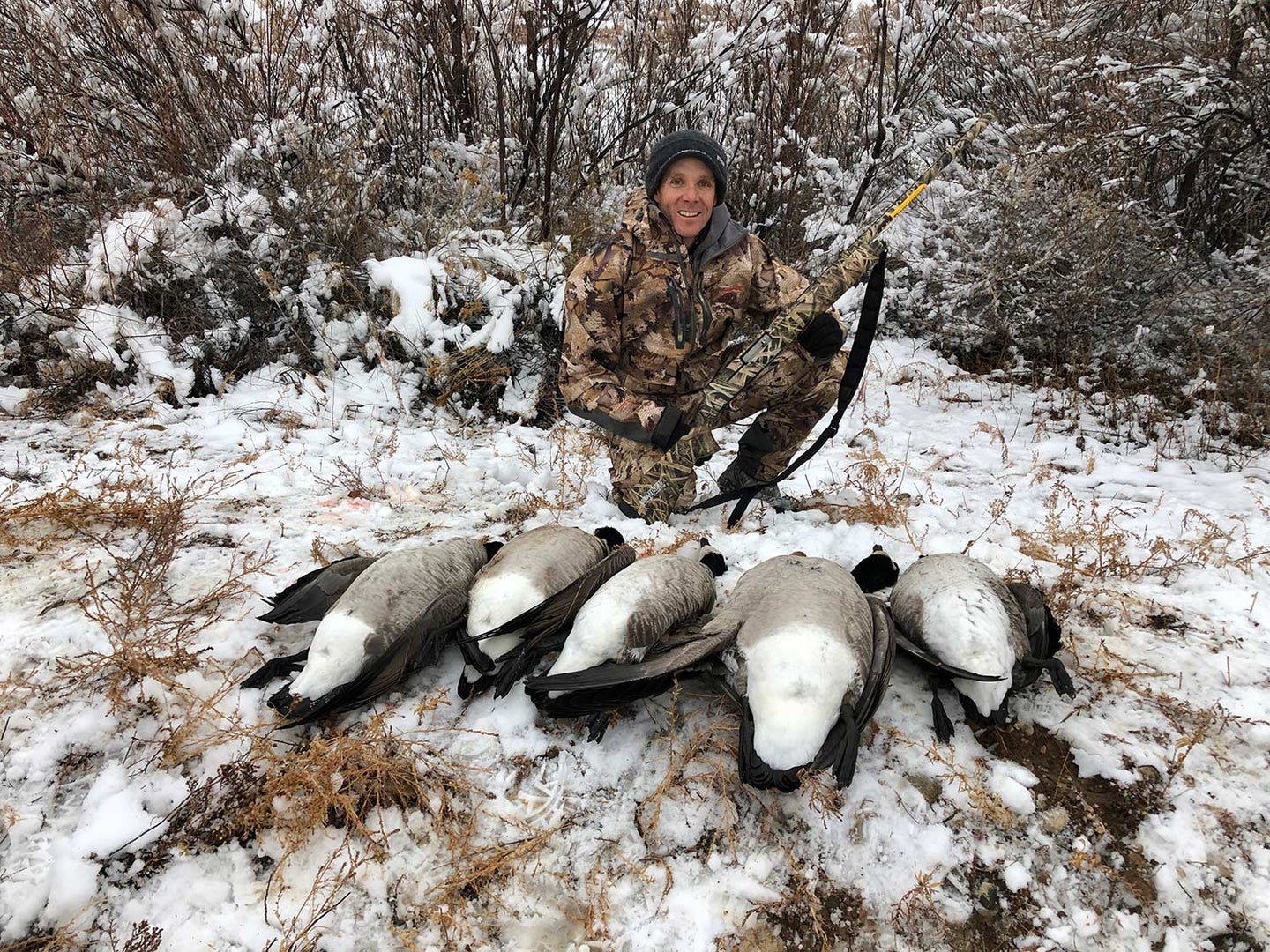 The author with a limit of late-season Canadas. Jace Bauserman
SHARE

Late-season honkers are tough. These birds are so wary at this point in the season that there’s almost no point bringing your gun unless you also bring A-game. According to champion goose caller and waterfowl fanatic John Vaca, that means stepped-up scouting, creative decoy placement, and high-quality, judicious calling. Here’s his advice for more feet-down action on late-season Canadas.

How to Scout Late-Season Geese

When temperatures turn frigid during the late season, Vaca focuses his scouting on grain crops. “Plowed corn fields draw geese like moths to a flame, as do harvested maize and millet fields,” he says. “I spend a lot of time watching geese in the fields I’m going to hunt, of course, but I also watch fields I can’t hunt. I want to see generally how birds are working and how they congregate. By watching the formations of live geese on the ground, you can then mimic what you see with your own decoys.”

When I’ve hunted with Vaca, we’ve also spent plenty of scouting time gauging how content birds seem to be in a given field. If landing geese hit the dirt and start feeding right away, that’s a plus. If they start cruising the field immediately, food is likely scarce, and it won’t be long before they leave for a new location. Ideally, you want a field that holds throngs of contented feeders, with plenty of resting geese in the mix too.

When glassing birds, take note of the their exact location in a field and snap some photos, which makes it easier to replicate what you see later. Once you’ve picked a field to hunt, watch it a second day if possible. Arrive before the geese do and pay attention to the approach of the first group. Do they dive bomb the field or circle multiple times? A dive bomb equals content birds and a field with good grain. Multiple circles mean cautious geese. You’ll also want to watch the approach of the next few groups. With live geese in the field, they should fall in. If they don’t, you might want to consider a different spot.

How to Set Decoys for Late-Season Geese

The biggest key to a good late-season goose spread isn’t quality decoys or large numbers of fakes; it’s your own creativity, says Vaca. “You have to do something different from all the guys with trailers loaded with decoys. Most of these hunters are setting up full-body decoys in the same fishhook or horseshoe pattern every time. If you don’t think geese recognize and get wary of these same formations, you’re crazy.”

When hunting big geese especially, Vaca loves to get away from the huge spreads and instead sets only a couple dozen family groups of fakes.

“I’ve killed lots of late-season geese over 24 or fewer decoys,” Vaca says. “Most of today’s decoys are quality, but when you’re only using a dozen or two, you need to make sure that the head and tail, at the very least, are flocked.” This reduces shine and makes the decoys look very realistic. Set out a few family groups of six or eight decoys to a bunch and have more feeder and relaxed-posture decoys than anything else. “I’ve watched big geese pass over spreads of 500 and even a 1,000 decoys to land in my two dozen. It’s just a different look.”

Smaller geese—lesser Canadas and cacklers—typically travel in large flocks and look for bigger groups of geese on the ground. In this case, you have to go with a somewhat large spread. “The trick here is really blobbing these decoys up,” says Vaca. “Small geese like to land together and congregate. They don’t have a huge wingspan, so even if you space the decoys 18- to 20-inches apart, these geese still have enough room to land.”

What if you’re hunting small geese and don’t have a shed full of decoys? On solution is to use a “lunch-line” set. Blob together a few full-body fakes with a dozen or two shells, making sure every decoy in the blob is a feeder. Then use full-body decoys to make a few lines walking toward the main bunch. This gives the impression a group of feeding geese has found the best grub, and just-landed geese are joining the party.

Vaca also believes it’s important to mix up your decoys. “It seems like everybody wants full-bodies. But if there is snow on the ground, I like to use sleeper shells. A lot of times, geese will hit a snow-covered field and take a nap. Sleepers give your spread a realistic look. I’m also not afraid to toss in some silhouettes, especially when hunting smaller geese. Silhouettes are more affordable and easier to tote, and they also give stale geese a new look.”

How to Call Late-Season Geese

Even more important than making the right calls this time of year is making quality calls. You should always be working to improve your general goose-calling skills, but especially now. “Do some research,” says Vaca. “Check out YouTube videos and watch top-tier callers. Take note of the calls they’re using. Talk with friends about the types of calls they’re running. Check out waterfowl chatrooms and social media platforms where you can ask all kinds of questions about calls. Then buy the best call you can afford, and master it.”

When it comes to talking to late-season geese, much like decoying, Vaca adjusts his calling to the types of geese he’s hunting. Small geese in large flocks can be difficult to call, simply because of their numbers and high-pitched tones. They often can’t hear a caller or two over their own noise.

“When I’m hunting small geese over big spreads, I like to get multiple accomplished callers out there with me,” Vaca says. “When we know the geese can hear our calls, we jump on them with lots of rapid honks and clucks. We get noisy and loud. As the geese approach and their volume grows, we tend to back off the calling if they’re cupped up and acting like they want to land. If the geese are staying high, we get more excited and aggressive until they either respond or move on.”

Larger geese, especially those late-season monsters, require something different. “I like long, lone honks,” says Vaca. “The real key for finishing big geese, though, is being able to cluck and moan. The cluck is just a series of high and low notes in quick succession. The moan is nothing more than basically saying ‘oooo’ into the call. Watch a few how-to YouTube videos and learn to cluck and moan.” Combined with good scouting and a spread that looks a little different, these two calls will pull even the wariest big honkers.