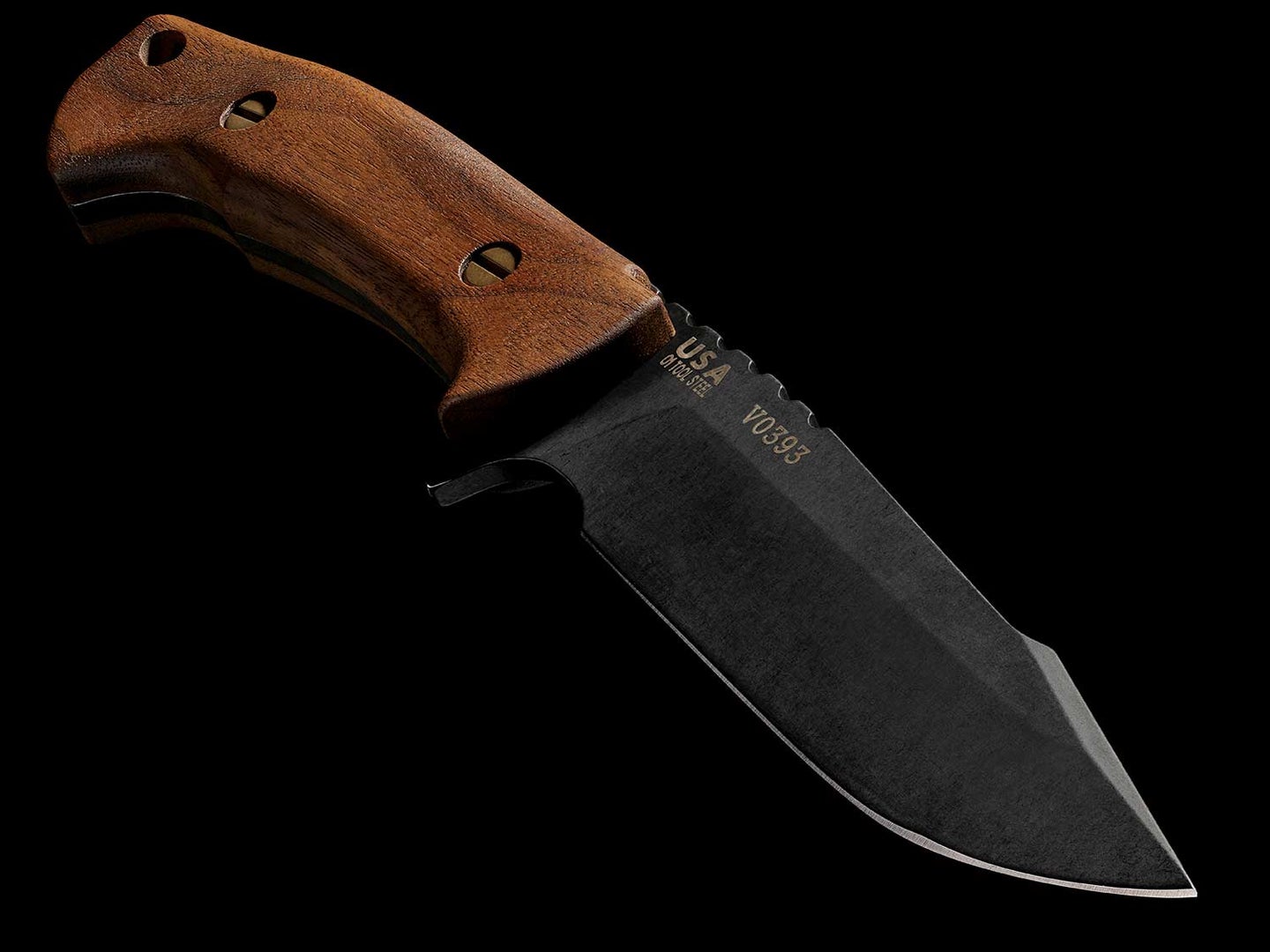 A burly blade like the Range Harpoon from Hinderer Knives is ideal for batoning. Nick Cabrera
SHARE

1. Baton Wood with a Knife

My first dozen knives were what we called belt knives because that’s where I wore them, in sheaths riding outside my Sears Husky jeans so everybody could see that I’d spent my paper-route money on something worthwhile instead of another hour on that stupid Space Invaders game. Those knives were stout, full-tang blades—big enough to kill a bear and tough enough that you could beat them like a drum with a heavy stick.

That skill is called batoning wood, and it’s a swell way to get at the dry stuff inside wet firewood or crank out splints that you can whittle into tent stakes or survival traps. To do this, find a medium-size piece of kindling and stand it upright on a tree root or even a picnic table. Position your knife on top of the wood so that the edge is in the center of the wood, and the end of the blade sticks out a few inches. In your strong hand, hold a wrist-thick stick of dense hardwood about 18 inches long. This is the baton. Use the ­baton to tap the spine of the blade so the edge bites into the wood. Then commence to whacking the exposed knife tip to drive the entire length of blade through the wood.

Batoning will turn a dry, seasoned 4-inch-thick piece of kindling into flame-catching pieces with a few hard knocks. Beating on a knife blade might seem to go against the grain of Boy Scout training, but it’s an impressive skill that cuts the time and effort between rolling out of the tent and warming yourself over a roaring fire. —T. Edward Nickens

After a texas prairie duck hunt this year, my guide brewed coffee in a kettle suspended over a fire from a simple lashed tripod. He could have brought java in a bottle from the lodge. Or fired up a Keurig from a portable power pack. But he knew that there’s nothing so iconic and authentic as black iron held aloft with a tripod of saplings lashed tightly with rope. The homespun apparatus lends a certain pioneering aesthetic to any camp scene, and it’s still a handy way to rustle up a meal without a propane stove.

Learn to lash a tripod, and a new world of old-school outdoor skills is possible. Hanging a black iron pot is a snap. But you can also smoke meat, dangle a rabbit on a gambrel for an easy bunny rotisserie, hoist a deer, or fashion a quick garbage bag holder. A stoutly tied tripod is a fantastic frame for an emergency shelter, or a handy anchor for a tarp when there’s nary a tree in sight.

You need three poles of equal lengths, and 5 feet of cordage. If you plan on cooking under the tripod, cut your poles tall enough to keep synthetic lines, such as p-cord, away from the heat. Lay the poles beside each other, and tie a clove hitch around one of the outer poles, about 6 inches from the end. Weave in and out of the spars with racking turns, until you have at least three wraps around the poles. In the two pole gaps, make two tight frapping turns, then finish with a clove hitch around the first pole. To raise, spread the tripod legs apart.

In Texas that afternoon, we drank coffee from tin cups and warmed our butts by the fire. It was after shooting hours, so there was whiskey, too. Once you raise a kettle on sticks, it’s not easy to stop playing cowboy. —T.E.N.

I’d like a sticker for the back glass of my truck that says Proud parent of a kid who can I.D. the hair in a coyote turd. My 5-year-old son, Anse, is in kindergarten and learning to recognize sight words and count to 50. After school, I’m teaching him how to recognize the sign left behind by wild critters, and to understand why we set our traps where we do.

We learned to catch raccoons easily enough, but we both want a coyote. Anse asks me daily how big they are, if they stink, and if one got in a fight with a big boar raccoon, who would win? I tell him that a ’yote could whip a boar coon, but he’d need a good day to do it. What I don’t say is that the coyotes have his old dad stumped. We only started trapping last year, and my skill has yet to catch up with Anse’s enthusiasm. I’ve always admired good trappers and their quiet confidence, but I was intimidated by them, too. My ineptitude at catching coyotes only drives that feeling home.

I mess with foothold traps in my shop at night and watch YouTube videos on making dirt-hole and flat sets. Good trappers say it might take a week for a coyote to find a set, and we check them every 24 hours. We’ve had traps in the ground most of the winter, and our failure rate stands at 100 percent. Yet Anse springs out of bed day after day, pulls on his coveralls, and goes with me to check traps by light of a headlamp before he goes to school. We find traps that have been ignored, traps washed out by rain, and traps dug up by coyotes that weren’t fooled.Then one Friday afternoon, with just an hour of daylight left, Anse and I take a walk and cut a set of fresh coyote prints in a two-track dirt road. We bed three traps in a 100-yard stretch. That night, Anse tells me, “I know we’re going to catch one.”

It being Saturday, I persuade him to wait until after daylight to check the line by saying the coyotes might move best right before sunrise. He paces in his coveralls with a box of apple juice, looking out the window. Finally, he says, “Daddy, I can see. Let’s go.”

A hundred yards from the very first set, I can see pointed ears darting back and forth. I finally get to say the line I’ve been rehearsing in my head all winter: “Buddy, we’ve got a coyote!” It’s a rare cold and clear day, a break from the usual February rain and mud. Anse tells me his breath looks like smoke. Then, matter-of-factly, he adds, “Coyotes move best when it’s cold and sunny.”

He’s got a quiet confidence that I admire. —Will Brantley

I’ve cooked dutch oven meals that were fit to eat at a black-tie dinner and black-pot grub so scorched that I couldn’t get the gruel off the pot with a jackhammer. I learned late in the game how to set a Dutch oven’s cooking dial with a few simple charcoal briquette formulas. You still need to experiment at home to fine-tune the numbers since Dutch ovens and briquette brands vary. But start here to dial up your pioneer street cred.

Frying grub in a Dutch oven is a snap: Use the same number of coals as the number of inches in the oven’s diameter, and place them all underneath.

The most difficult part of any Dutch oven meal is keeping the burn at bay. Rotate the entire oven every 10 to 12 minutes by lifting it straight off the coals and turning it one-third of a revolution. Set the oven down, then lift the lid by itself and twist it one-third of a turn. Most coals will burn at an even heat for about 30 minutes or a bit longer, so be prepared with additional briquettes if your recipe calls for a longer cooking time.

Once your buns—or backstraps—in the oven are done, whisk away the ashes on top of the lid with a small broom or a handful of grasses before cracking it open to reveal black-iron perfection. —T.E.N.

The perfect cup of cowboy coffee is hot enough to sear meat and strong enough to wake the dead—but that doesn’t mean it has to be riddled with grounds and steeped with acid.

Here’s how to get it done on the trail with nothing more than water, beans, and a campfire. For the most impressive results, use a speckled enamel coffee pot—they’re easy to find on eBay—and Arbuckle’s ­Ariosa Blend coffee, a cowboy favorite ever since it was developed in 1865.

Bring water to a rolling boil. Remove from heat and let it sit for 30 seconds. Spoon in 2 tablespoons of coarsely ground coffee for every 8 ounces of water. Stir the grounds and let the coffee sit for 2 minutes. Stir again, and give the grounds another 2 minutes to settle. Use a spoon to sprinkle a bit of cold water on top, which will sink and help settle the rest of the grounds. Pour slowly.

It’s best to brew just enough for a few cups and start the process over if you want more java. Coffee that sits in the pot with coffee grounds will turn harsh and bitter. —T.E.N.

I have nothing against a modern batwing camping tarp, with its funky geometric shape and ability to pitch in multiple configurations. But my Tundra Tarp from Cooke Custom ­Sewing has had me covered for nearly 15 years.

It’s an old-school, rectangular camping tarp with heavily reinforced grommets, multiple tie-outs along each edge, and a reinforced central pole patch. It goes up in a snap with a simple ridgeline and guylines running to tent stakes or nearby trees, and when the center of the tarp is pushed skyward by fitting a long pole, or a couple of canoe paddles lashed together into the center pouch, it will shed heavy rains.

Call me a square, but this tarp is still the bomb for cooking, dining, and foul-weather shelter. —T.E.N.