Oregon Poacher Uses Blow Gun to Wound and Kill Mule Deer. Here’s How You Can Help Police Bust Them

A state sportsman’s group is offering a $1,000 reward to help uncover the violator and put an end to the cruel death-by-dart cases 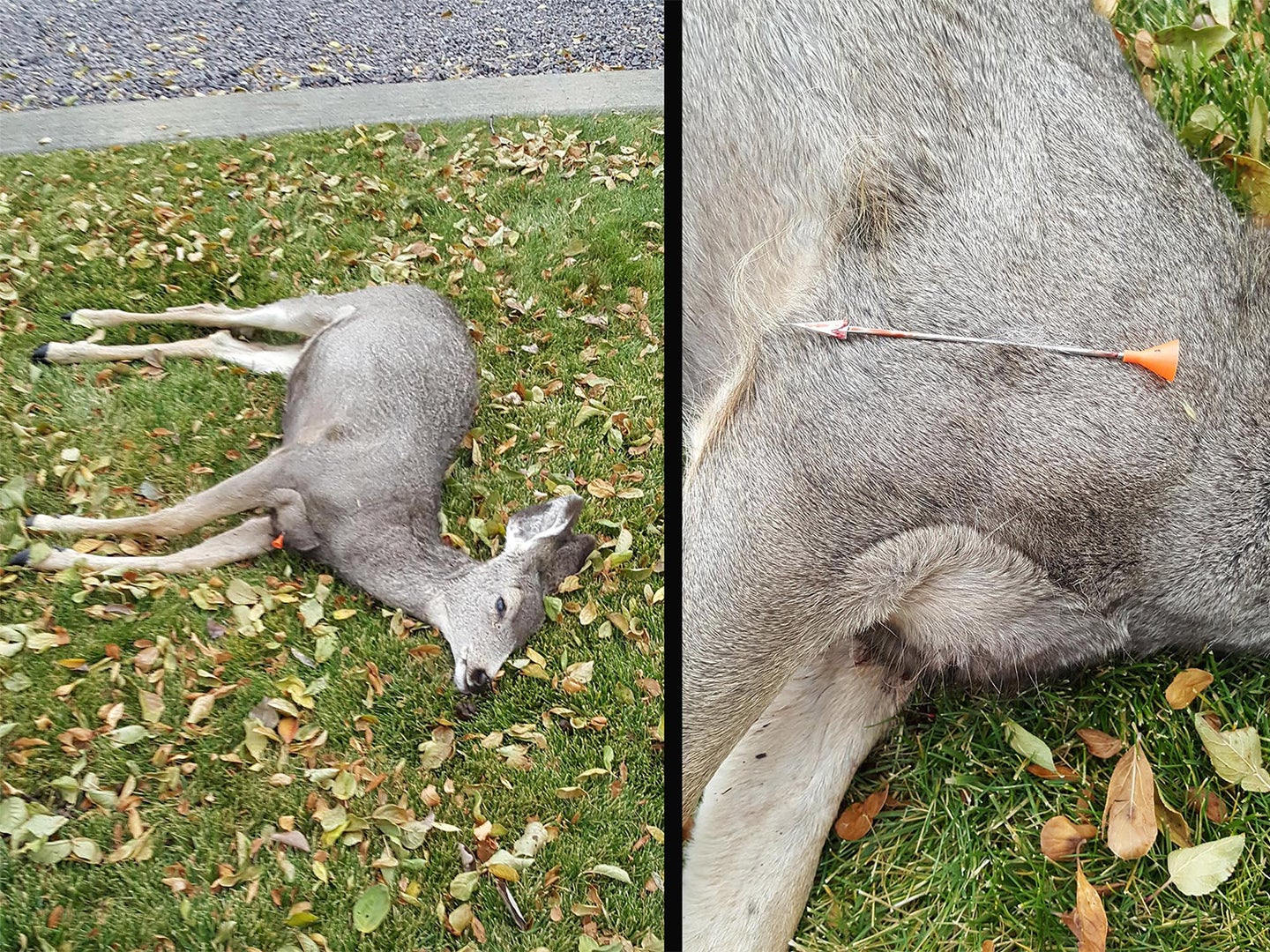 A mule deer fawn, found dead with a dart it it’s neck. Right: The doe, darted in her side, had to be euthanized. Oregon Department of Fish and Wildlife
SHARE

Who uses a blow gun to shoot mule deer? Some idiot in Oregon, that’s who. And the person is likely still at it.

The Oregon Hunters Association has put up a $1,000 reward for information leading to the discovery of the violator or violators who have now darted at least five mule deer in Burns, Oregon, where city-dwelling animals are easy targets. Most poaching cases are equal parts greed and cruelty, but this one has authorities shaking their heads and disgusted, as there’s nothing to be gained from leaving darted deer to suffer, and in at least two cases, to die.

On November 6, Oregon State Police Fish and Wildlife Troopers found the carcass of a mule deer fawn with a blow dart lodged in its neck. In mid-February, they responded to a citizen report and found a mule deer doe with a similar dart lodged in her side. The deer was in such poor health, there was nothing troopers could do but euthanized the animal. In three additional cases, biologists have found and sedated darted deer, surgically removed the darts, and released the animals.

“Using a dart is an inhumane way to kill a deer,” said Regional Director for the Mule Deer Foundation Ken Hand in a ODFW press release. “Aside from being cruel, this is illegal, and it is a wanton waste of the animals.”

While blow guns can be effective for some small-game animals, they are illegal and considered non-lethal for deer. ODFW biologist Rod Klus, who assisted in saving the three wounded animals, underscored the cruelty of shooting a deer with one. “Either the wound will lead to an infection, or if the stomach or intestines are punctured, the deer will die, but it will take a while, and it will be painful,” he said. “It takes a deer anywhere from days to weeks to die from infection.”

Klus worries that the two deer that have been killed, and the three injured deer, will not be the last. “This has been going on for a while,” he said. “These cases take time and drain resources when we could be doing other things for wildlife.”

The Oregon Hunters Association’s $1,000 reward would go to anyone whose call to the Turn In Poachers (TIP) Line leads to a citation.The TIP Line phone number is *OSP (677) or 800-452-7888. Or report by email: TIP@osp.oregon.gov. If you would like to contribute to the reward fund, contact any OHA chapter.