Twenty-five years later, it all comes together for the author 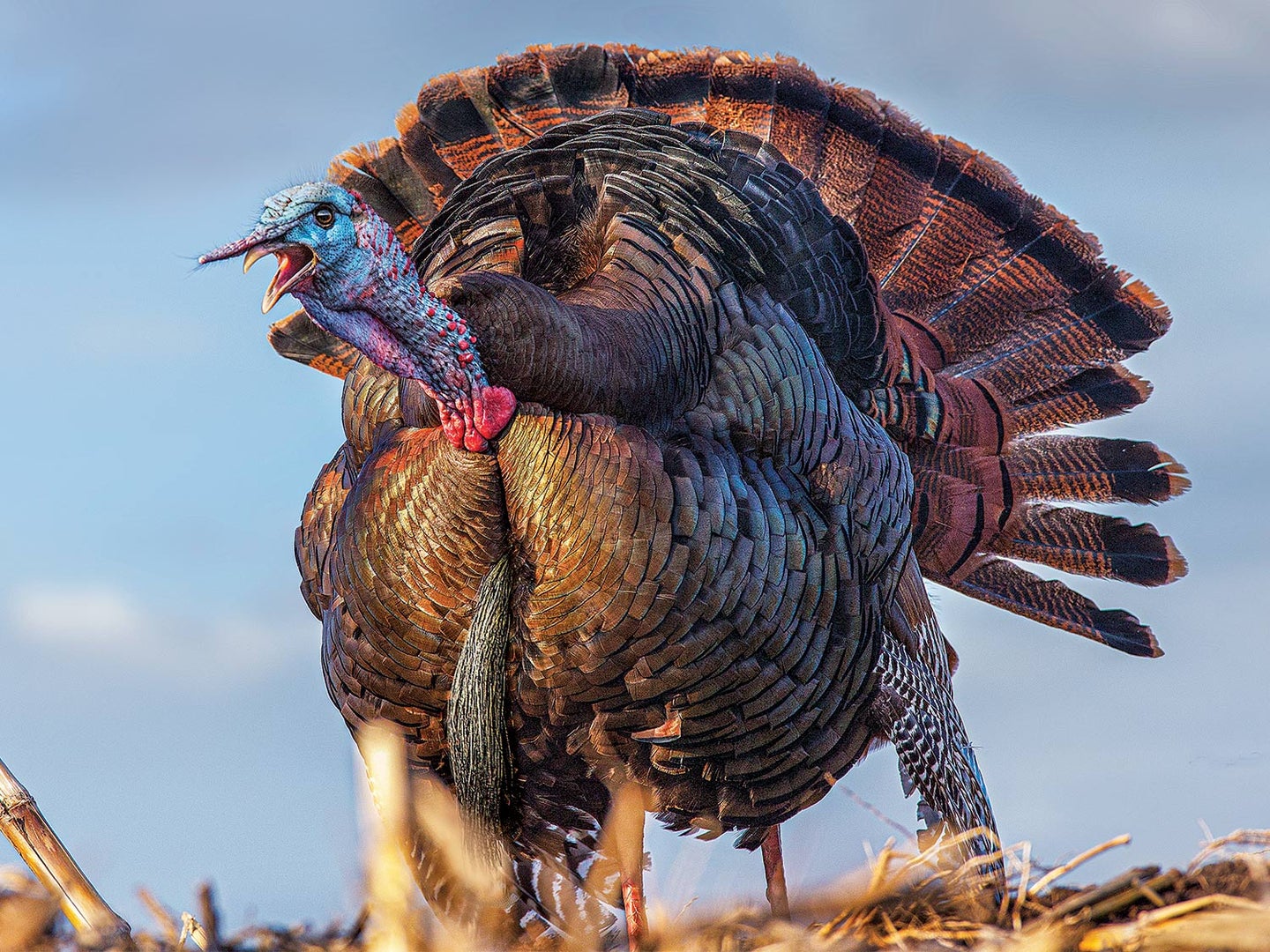 A hard-charging Eastern tom pauses to strut and gobble as it weaves between stalks of corn stubble. Tom Martineau/The Raw Spirit
SHARE

Driving the length of the Hawkeye Wildlife Area’s south side, I can point to landmarks all along the way and recall successes and failures over the years. They track my growth as a turkey hunter like the pencil marks on the wall record the height of my children.

Hawkeye’s roughly 13,000 nondescript acres of sand, willows, and soft maples straddle a dozen miles of the Iowa River, in Johnson County, Iowa. I’m not afraid of hotspotting myself by giving its location because my spot, frankly, is not that hot. Neighboring what passes for a metro area out here, Hawkeye is no secret—not from other hunters nor birders nor a cast of more nefarious characters ranging from mere vagrants to meth dealers. But what it lacks in pristine beauty, it makes up for in location. Just 20 minutes from my house, it’s the place where I’ve hunted turkeys more than all other places combined.

I met Hawkeye’s woods in 1987, when turkey hunting was still a novelty around here. Maybe that’s why the ­sporting-​goods clerk gave an odd downsell. Sweeping aside the slate and box calls I was ready to buy, he held up a diaphragm. “Buy this,” he said. “That way, if you don’t like turkey hunting, you won’t be out much money.”

Armed with one mouth call, a duck gun, and no clue, I made the long hike back to a timbered bend in the river three mornings in a row. The first two, I sat in the rain. The third, I called to a bird gobbling on the roost, and it answered my strangled yelps by running to the gun. Last spring, I shot my most recent tom in that same bit of woods.

Hawkeye is a frustrating place to hunt. Table-flat and wide-open, it doesn’t leave room for error. Who knows how many turkeys I’ve run off there over the years? Much as I’d rather run-and-gun, I’ve settled on a combination of blind calling, spot-and-​­calling, and dumb luck to pry birds out of the area. Three decades of learning where the birds like to be helps too.

That familiarity makes the place feel like an old friend, but it breeds contempt on the frequent days when Hawkeye’s woods seem turkeyless. Then, I feel stuck in a dysfunctional long-term relationship. I think I should find private land, or at least see other wildlife areas. It’s not like Hawkeye doesn’t see other hunters. But in the end, I’m loyal, or maybe lazy. These are my turkey woods, and I return every spring.

A piece of land shouldn’t be capable of loving you back, but sometimes I wonder. That first turkey was a gift. Then there was one morning a few years ago when, late to the woods as I so often am, I parked well after sunrise. I tore a brand-new mouth call out of its packaging, popped it in my mouth, and yelped softly to see what it sounded like before I got on with the hunt.

A gobbler answered in the distance. Not quite believing what I’d heard, I got my gear together and walked up a wooded creekbottom bordering ag fields. I blew the new call again. The tom gobbled again, and then I could see it running across the bean stubble, a hen scurrying behind to keep up. You don’t inadvertently strike a bird from the parking lot of a public area and watch it close a few hundred yards in minutes, dragging a hen, but that’s exactly what happened. And this wasn’t some snood-for-brains 2-year-old either, but a mature 25-pound gobbler. It should have known better.

I walked back to the Jeep, riding the same sense of surprise and gratitude as when Hawkeye dropped that first bird into my lap. Then I realized that I’d killed that first bird exactly 25 years before, to the day. I was touched. The gobbler made the perfect anniversary present. You’re supposed to give ­silver on a 25th anniversary, but bronze feathers work for me.