The Best New Trail Cameras of 2020

We tested the latest models for image quality, detection range, trigger speed, and more. Here’s how they stacked up 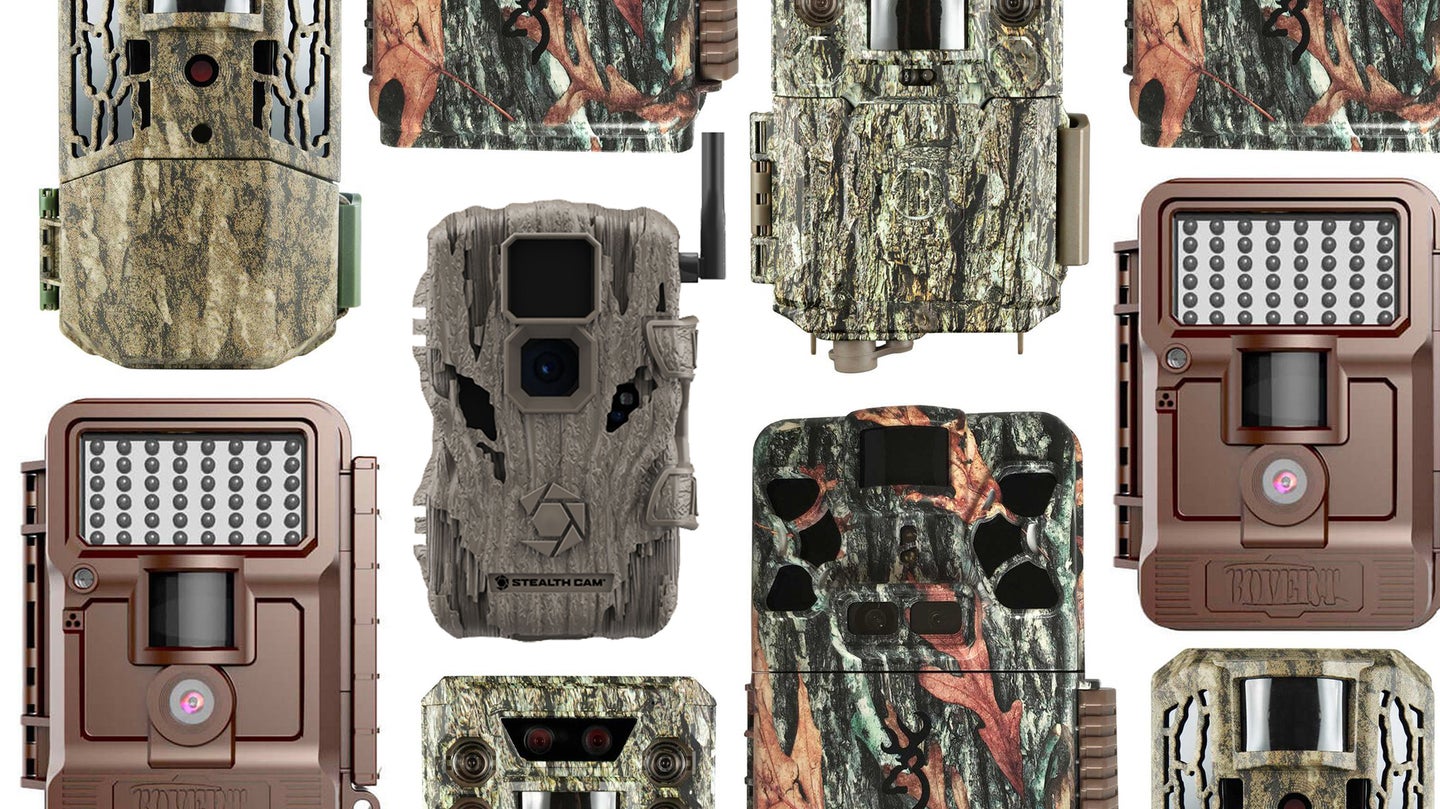 We tested the latest models for image quality, detection range, trigger speed, and more. Here’s how they stacked up Field & Stream
SHARE

Trail cameras have gone from a fun novelty to one of the most important scouting implements in a deer hunter’s toolbox. That fact makes trail-cam selection a bigger deal every year for many serious whitetail hunters. To help you make the right choice, I reached out to the top manufacturers and asked each to send their best new model for 2020, so I could put it to the test. I didn’t specify “best value” or “best overall” or “best standard or cell cam”; I just asked them to send the new model they thought everyday hardcore hunters, like you, would most appreciate. Here’s how I put them through their paces, and how they stacked up.

First, I loaded batteries and SD cards into all cameras and followed the manufacturer’s instructions for setup and programming. I mounted each camera on a tree in my yard, where I’d placed pre-measured markers to indicate detection- and flash-range distances. Over a period of three days, I tested all the cameras under varying light conditions (dawn/dusk, midday, and night) to gauge performance in the following categories; flash range, detection range, trigger speed, recovery time, and photo quality. I also rated each camera’s ease of setup, as well as it’s apparent build quality.

The Patriot is Browning’s newest high-end non-cellular camera, and the extra dollars result in better pics. The Patriot actually features two separate pairs of lenses and sensors, one designed to optimize daytime images, the other for top-quality night pics. If you like to tweak settings, the Patriot offers multiple options for night illumination, and the 2-inch color viewing screen makes setting the camera up, not to mention scrolling through pics, a breeze.

Hits: The image quality of both daytime and nighttime pics is excellent. The Patriot also has the best apparent build quality, with a case that’s rock-solid and well-finished, and it tied for second-best for ease of programming. The trigger was easily the best in the test, and the daytime detection range (which covered more than twice the advertised distance in my test) was truly impressive.

Misses: Well, if image quality, detection range, and trigger speed aren’t that big a deal to you, you can get a perfectly serviceable camera for about 30 percent less. So, there’s that.

Bottom Line: The Patriot was the best camera in my test, and for my money, the best new non-cellular camera for 2020.

“DS” stands for Dual Sensor, and like the Browning above, this camera a unique set of sensors for daytime pics, and another set for night. This innovative technology is most notable in the night time pics, which are sharper than almost any I’ve seen. As the name implies, the night illumination is almost invisible.

Hits: The dual sensor does produce clearer, sharper pictures, especially at night, and it gets a huge boost from a 30 MP lens. Tack-sharp photos can be a big help when you need to zoom in on an image to identify specific bucks at the edge of the camera’s detection range; if that’s a key feature for you, this camera will certainly help.

Misses: In my test, the detection range wasn’t quite as large as the same-priced Browning. Nor was the trigger as fast.

Bottom Line: This is a great camera for any setup where night movement is anticipated (food plots and field edges); you’ll get crisp, clean pics without spooking any camera-shy bucks.

The NBF22 features photo, video, and hybrid settings, and the HD video with audio is plenty good for a mid-priced camera. Forty invisible LEDs and a 1.5-inch viewing screen are packed into this low-profile camera that’s easy to setup.

Hits: Trail cams are weird. The NBF22 has one of the slower advertised trigger speeds, yet it nailed a red fox that ran through my test setup that only one other camera got. Go figure. That said, the flash range is solid, and so is the build quality. I also like a low-profile camera, and this was one of the smallest in the test.

Misses: I’d rank this camera near the bottom for photo quality. It took a ton of pics, but even the fat-pitch photos (me standing in front of the cam) were a little fuzzy.

Bottom Line: The NBF22 a solid choice if you’re after a reasonably priced camera that gets the job done on mineral licks and bait (where legal), as well as mock scrapes and feeding areas.

The Primos camera line has hung its hat on simplicity and ease of use, and the newest Autopilot continues that tradition. I’ve taught my 90-year-old father to run this camera, and even technophobe Dad understood how to set the four clearly marked buttons that select mode, delay, and photo burst/video length.

Hits: Although not the best, the pictures are surprisingly good for such a low-end unit. Build quality is also fairly impressive, and if the name of your scouting game is getting as many cams out there as possible, the price tag on this model is very hard to beat.

Misses: Guys who like the ability to tweak settings might go nuts with the Autopilot. There are only a few functions that require your masterful hand.

Bottom Line: This is my Best Buy winner. It’s a great choice if your goal is to get as many cameras out there as you can for minimal cost. And I have to say: My Autopilot took some pretty amazing pics for a C-note camera.

Stealthcam’s newest wireless unit, the Fusion has some really innovative features. First, adding the camera to your wireless plan is as simple as scanning a QR code on the inside of the case. Second, all controls are set via the proprietary Command App, which allows you to change settings remotely from your phone. And the Fusion is impressive for its broad range of data plans; monthly or annual options are offered, which allows users to select an economical plan best suited to their needs.

Hits: The Fusion is one of the most reasonably priced wireless cams out there, and yet the detection range is solid and the daylight photos are very good. Also, the pics go to the Command App on your phone, instead of clogging up your text-messages.

Misses: The trigger speed is relatively slow. And, if you’re not into the whole app-thing, this camera could drive you a little crazy.

Bottom Line: If you’ve contemplated a wireless cam but never taken the plunge, the Fusion makes it really easy to get started.

Another highly innovative new cell camera packed with features, the Insite Cell can operate on any wireless carrier, and like the Fusion (above), it is controlled from an app on your phone. The HuntSmart App can sort photos by species, score bucks, even predict game movement. There are three subscription levels, allowing you to choose (and change) a data plan that matches your camera use.

Hits: The photo quality is very impressive and the trigger speed more than adequate. The Adaptive Illumination technology adjusts the amount of flash used to the distance to the animal and makes for sharp night pics. And I’ve got to say, even for this digitally challenged hunter, the app is pretty cool.

Misses: There’s a rubber cover that comes off the front of the camera that’s meant to be a weatherproofing feature. I found it pretty irritating. And again, if you’re not techie, the app features might be lost on you.

Bottom Line: If you’re into cool new tech, and are savvy enough to get the most from it, this is a great choice at a can’t-beat price for a cell cam.