The author finds one favorite in his enviable collection of blades 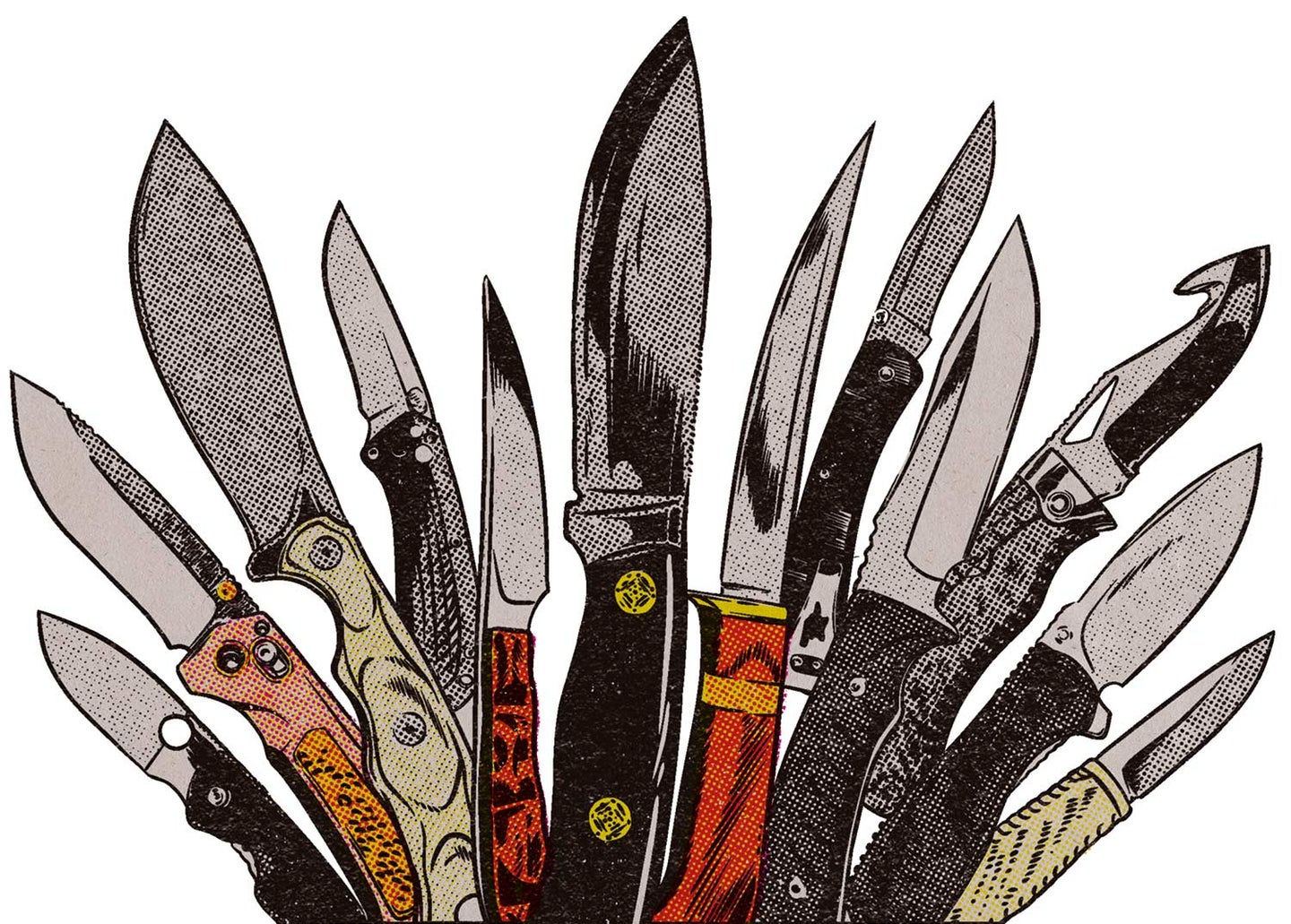 A knife nut goes through his collection of blades. johnny dumbrowski
SHARE

There’s a little piece of meat under the clavicle of a duck that drives me nuts. To get at it requires a moment of dedicated concentration when filleting the breast. I have to halt the cut that severs the fillet from the keel of the breastbone, turn the knife spine at a downward angle—blade up and nearly parallel to the breast keel—and probe the narrow tip toward the neck to cut away cleanly along the underside of the collarbone. If I do this right, I’ll wind up with at least an additional 1/1,000 ounce of tasty duck flesh. I try to do it right with every single duck, but it takes a particular blade to get the job done.

On a 3-pound bluefish—surely one of the finest fish you can put on a plate, no matter what people say—the backbone seems to bulge laterally a bit more than on some other species. Fillet a bluefish with a single quick swipe down the spine, and you’ll miss a fair bit of meat above the backbone. To get at it, you need to make an initial cut from the top of the fish down to the spine, freeing all of the meat that lies north of that funky bulge. Only then should you cut away the rest of the fillet. I find the typical fillet knife a little too long and a little too unwieldy for this kind of control. It helps to have a shorter knife, still springy, sharp, and pointed like a lance.

In fact, I have a different knife for about 50 different knife tasks. The blade I bring to tackle a deer’s backbone, when I’m performing a surgically intricate cut to ride the blade edge around each knotty knob of each vertebral process to capture each morsel of backstrap, isn’t the same knife I use to skin out the deer’s hide. I need a special tool for the job—or, at least, I’ve convinced myself that I do. I know I want that backbone so clean, you’d think it had been swarmed by carrion beetles. When I’m done, all the meat goes in a vacuum bag. I’m not leaving a single cell for a stinking bug.

All told, given my pretty wide range of activities in hunting, fishing, camping, paddling, and general mucking around, I figure I could squeak by with, say, a dozen and a half knives. Any fewer and I’d be lost, the same way some serious shooters have to own a dozen deer rifles or they can’t bear the thought of a looming opening day. And suffice it to say, I don’t squeak by.

You’d think I’d be shy of all knives, given my history. My earliest knife memory is of my brother and me in the fam­ily’s brand-new 1973 Ford Pinto station wagon—the model with the fake wood paneling down the side. We were on the way home from a camping trip in the Great Smokies, and Mark and I were playing with our knives in the back seat like all good boys did in the 1970s. We’d drawn a bull’s-eye on a scrap sheet of paper and were taking turns holding it up while the other thrust the knife blade into the target. One of Mark’s thrusts was either off-target or dead-on, and overly enthusiastic: He stabbed through the target and into my lower thigh. Blood gushed. I stifled a howl. Mark and I stanched the wound with wadded-up sandwich napkins. That Pinto was my dad’s first new car, ever. I would have bled out in silence before I bled over all of that shiny new ­vinyl. I still have the scar.

That knife was a cheap Swiss Army knockoff bought at a mountain trinket shop that weekend and, in a perverse way, the back-seat stabbing kicked off my fascination with knives. From that year on, I saved my paper-route money for our annual trip to the mountains and started a knife collection marked, in its youthful years, with a fetish for knives hidden in the handles of nunchucks—it was the 1970s, remember—and the most expensive Bowies I could find. None of those could have cost more than $9, I’m sure, which was two months’ salary for a paperboy. When it came to knives, I thought nothing of dropping the typical spend for an engagement ring.

Read Next: The Best 25 Knives Ever Made

Thankfully, I grew out of my ­nunchuck-​and-​fake-​switchblade phase. To be honest, these days I’m nearly as taken with the provenance of certain knives as with their blade steels and grinds. Lately, I find ­every possible excuse to use a Diamond­Blade Summit. It’s a superior full-tang knife, with a blade profile that works well across as wide a spectrum of cutting tasks as any knife I’ve owned. So far, I’ve cleaned deer, ducks, geese, and a bear and moose with the blade. But it’s not just the make or manufacturer that appeals so deeply. It’s the knife’s history.

David E. Petzal gave me the knife a couple of years ago. The blade has a few light scratches that I imagine were left by Dave as he sharpened the knife by lamplight in a wall tent sagging with snow. A single decorative pin is missing from one of the handle mosaics. I like to think it was knocked loose when Dave leapt clear of a charging Cape buffalo. It sports a hand-​­braided ­parachute-​cord fob strung through the lanyard hole, and a handmade leather sheath. When I opened the box, attached to the sheath was a handwritten card: I made this sheath, by God. I may treasure the note as much as the knife.

Using the knife seems to be a way of honoring the life of another unrepentant knife nut, one whose writings on knifecraft shaped my own thoughts on the subject. I push that knife blade through the belly hide of a deer, and the act seems to cut through all the nonsense that crowds life these days. I have a lot of blades that cut like crazy. But that’s the only knife I own that cuts straight to the core of the things I love.

Gear Review: Get a Hold of This

Gerber’s new Controller fillet knives ($35–$50) come in both fresh- and saltwater builds—the latter with more corrosion ­resistance—but share similar ergonomics. Treads on the handle channel away water and fish slop for a sticky grip, and the deep finger choil and handle design help with precise control.