Products that can help someone you know elevate their tailgating game. 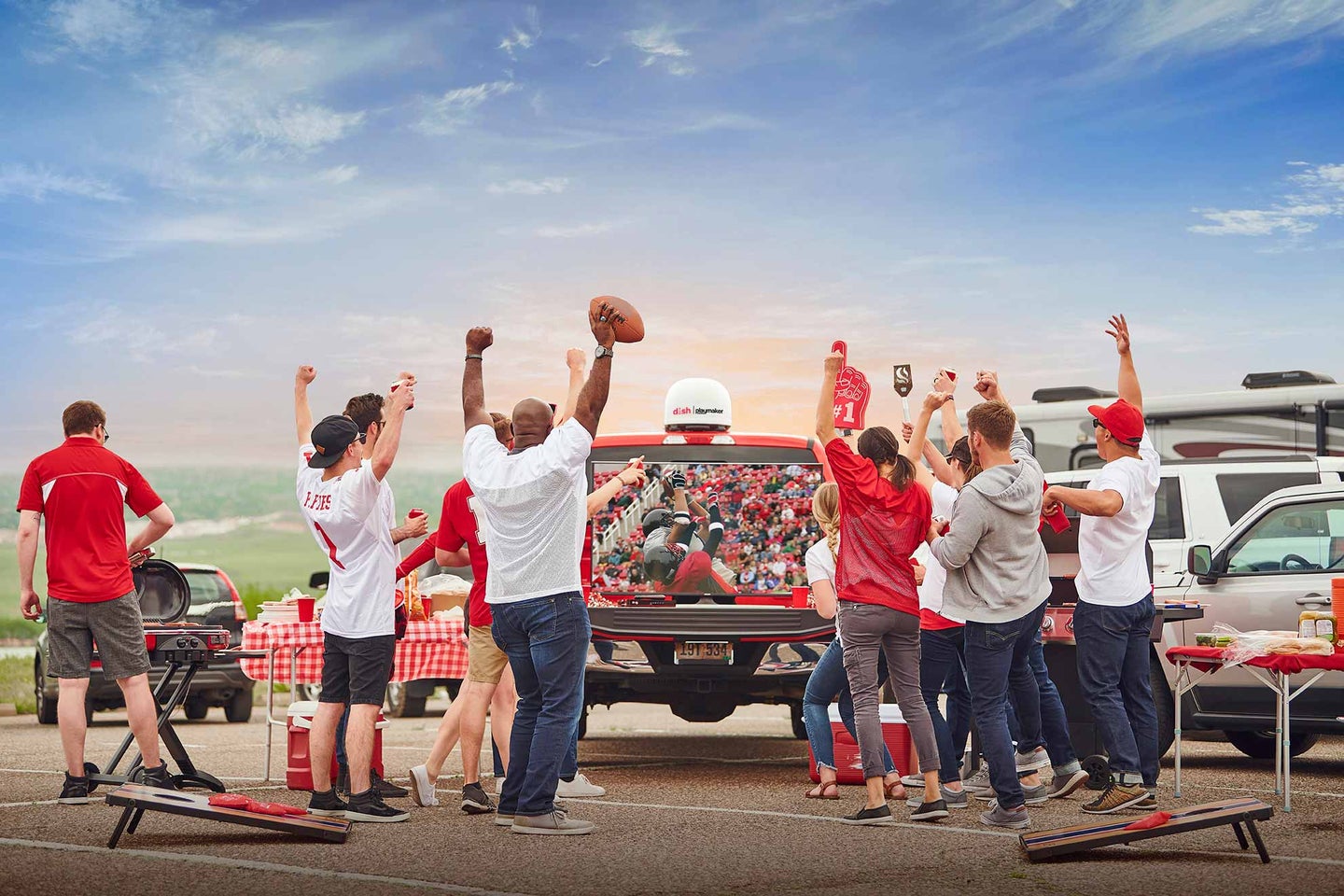 With DISH Outdoors, you can take your favorite HD programs with you wherever you go. DISH
SHARE

Whether you’re talking about the hours leading up an anticipated football game, a Fourth of July fireworks show, or the morning before a big race at the track, there’s only one way to celebrate—tailgating. For decades people have relocated barbecues, food, televisions, speakers, outdoor games, and tents and awnings to a few square yards of blacktop outside stadiums and sporting venues, nationwide. Not only are tailgate parties a great way to celebrate your favorite sport or event, it’s a terrific excuse to gorge on delicious food, spend time with friends and family, and get outside. To help someone you know get more out of any celebration that spills out the back of their pickup truck, here are a few items you should consider this holiday shopping season. From high-definition television solution to a portable fire pit, there’s something here that will help them turn their tailgate mixer into the best party in the parking lot.

This season, give the gift of entertainment for any adventure. DISH Outdoors is the ultimate complement to any hunting, fishing or camping trip. Ideal for remote cabins and campsites, DISH Outdoors lets you watch live HD TV anywhere, even places with no Wi-Fi or cellular signal. Only DISH Outdoors offers pay-as-you-go flexibility, just activate as needed and only pay for the months you use. Give the gift of live TV wherever your adventures take you. Save $30 on any DISH Outdoors bundle with special offer code: GET30

You pretty much can’t tailgate without a grill. There are charcoal people and gas people, but if either gather around the back of a vehicle long enough, somebody is going to apply flame to meat. For those who lean charcoal, you can’t go wrong with the PKGO. It’s a grill and smoker combo that works great for cooking steaks or slow-roast chicken wings. What really sets it apart though is the Flipkit. It lets someone detach the lid from the base of the grill and use it as another grill to double the size of your cooking surface. PK has been making grills like this since the 1950s and a lot of them are still around, so whoever you buy one for will probably still be using it long after their truck dies.

Around 48 million 1-pound disposable green gas bottles end up in landfills every year, and most places won’t recycle them. It’s easy to see why. Anyone that goes on enough camping trips soon ends up with a collection of half-filled propane bottles with no idea of how to get rid of them properly. The five-pound Ignik Gas Growler is a small refillable propane tank that answers this problem. It hooks up to any piece of equipment that accepts a standard green gas bottle—such as grills, stoves, heaters, or lanterns—and lasts five times as long. When you want to refill the Gas Growler, it only costs as much as one disposable gas bottle, so it will eventually pay for itself.

Unless you live under the sea, you probably read, saw, or heard about the unrelenting wildfires in the west during the hot months of 2020. The sad part about some of the situations is that most situations were avoidable with a little common sense and a reliable method for containing and disposing of the hot embers. That’s why I like concepts like the Kamoto fire pit. It’s easy to transport, packs down for easy storage, is constructed with powder-coated steel, and features an integrated ashtray that catches ash and debris—a must for leave-no-trace camping or impromptu campfires while tailgating or relaxing in the backyard. There’s even a grill grate if you feel like cooking genuine wood-fired steaks or marshmallows.

For a recent Field & Stream trip, we were able to test out some pretty incredible overlanding gear one of which being the 270-degree Alu-Cab Shadow Awning. It’s pricey, but it’s an upgrade worth investing in if you find yourself using your vehicle as a basecamp when you’re in the field. For us, it came in handy on an early season pheasant hunt. We were in wide-open prairie and needed some shade for us and the dogs to cool off. The Shadow Awning provides coverage where someone needs it most, on the side and back of the vehicle, essentially turning a truck into a wrap-around covered patio. It resists mold, reflects sun, and is very easy to use because it doesn’t require tethers or stakes. I went from never having seen this thing before to setting it up in all of five minutes. Break down is just as simple. Alu-Cab also makes attachable walls for the awning, and I could see this setup working well as a shelter in cold weather.

Cooking on the back of a truck can quickly become a mess because, well, you’re cooking on the back of your truck. You don’t have the cabinets and shelves that are in your kitchen to organize all of your stuff. Get someone a Dine O Max Camp Kitchen and things will get easier. It comes in a zippered canvas bag and unfolds into a counter-height table with cloth cabinets underneath. There are pockets and bars to hang utensils off of and a flip-out side table made to hold a two-burner camp stove and windscreen. There’s also a small wash bucket attachment for dirty dishes and a trash bag holder. You could feed dozens of people out of this thing, and when you’re done cooking it won’t look like a bomb went off in the back of your vehicle. If you don’t need as much room to work with, the Dine O Mite is a smaller version for about 150 bucks less.

The best way to turn a bad hunt around is brewing a fresh cup of coffee back at the truck. The AeroPress Is capable of producing ridiculously strong, weapons-grade coffee with little tools or drama. Put coffee grounds in, pour hot water, and use some elbow grease to squeeze out a cup. When it’s time to clean the press, use the plunger to push a compact puck of grounds into the trash. Unlike other coffee gadgets I’ve bought in the past, I actually use this one.

Halfway through a recent cross-country road trip I got this bag as a catch-all for whatever was floating around in the back of my truck. Whereas most tote bags are terrible and spill their contents all over the place, this one is not. Its thick canvas sides give it the shape of a box and the mesh zippered top puts a lid on gear that tends to roll around. It’s built like a tank with sturdy carrying handles so it’s perfect for chores like carrying firewood. Along with the 39L, there are medium and tall versions of this bag offered on 5.11′s website so you can get creative with what you want to store.

It may feel like cornhole is the latest-and-greatest backyard barbecue and tailgating game to land on the scene the last few years, but it’s actually be around for a very, very long time—it’s said a cabinet maker invented the game in the fourteenth century after watching kids throw rocks into groundhog holes. Still, the modern version is relatively simple (the first team to 21 points wins), and it’s a terrific way to mingle and socialize outside with friends and family, and the set from GoSports includes everything anyone would need to play; two boards, eight regulation-sized bags, a rule book (though there aren’t many rules) and a carrying case for it all. But the best feature is the construction—it’s UV and water resistant. If you’re looking for something that will add a new dimension of fun to someone’s tailgating experience, a cornhole set is an entertaining and budget friendly gift idea.

A few years ago, I received an ION Tailgater speaker as a gift. After some long days fishing solo in the boat, or doing odds and ends in my garage, I felt like a little background music was in order, but I didn’t want to completely close my hearing off to the rest of the work with headphones. Since then, I’ve used it for barbecues, tailgating events, beach day with my boys, and sometimes just in my man cave when I’m tying flies or organizing my junk. But the latest models are even better. Powered by a rechargeable battery that can last up to 50 hours before needing a boost, the Tailgater Smart has amazing sound quality and Blutooth connectivity so you can pair it with a smartphone or music device. But the cool feature that sets this speaker apart from others is the Echo Dot cradle on top that can accommodate 1st, 2nd, and 3rd generation models. Connected, anyone can use the Echo to make calls, play music, or be the backup band for an impromptu Karaoke session. There’s even an Echo power port to keep a device charged, and a USB port for repowering any other device. There are a lot of portable speakers available today, but you’d be hard pressed to find one with as many features and the sound quality of a Tailgater Smart.